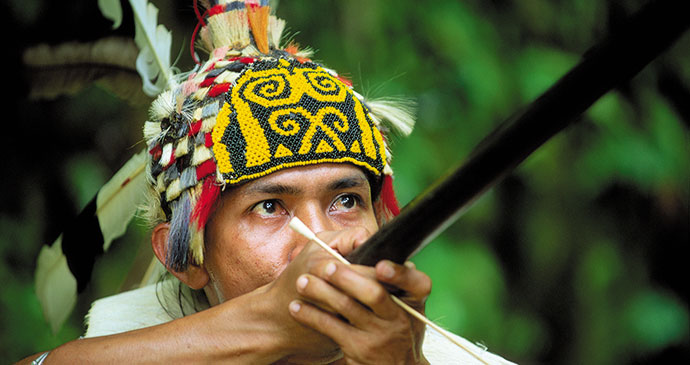 The Penan use blowpipes to kill deer and wild boar © Sarawaktourism

The Penan tribe have been making international headlines since the 1980s, when news of the devastation of Borneo’s forests and indigenous traditions first started to break through island barriers. Many Penan were among those arrested for protesting against logging; despite being inherently shy people, having had little contact with the world beyond the forest until recent years, their determination to do something about the all-out war on their forest homes made them go public.

The Penan are among the only hunter-gatherers remaining in Southeast Asia, and the last tribe in Borneo still living this traditional lifestyle. They live in groups of 20–30 in the Upper Rejang River area and along the Sungai Baram in central Sarawak, and around Sungai Limbang in northern Sarawak. , moving to new areas when their supply of wild sago flour starch (which they make from sago palms) runs out; they supplement their diet with wild fruits, jungle roots and plants. Their shyness of the world outside the forest, and of sunlight, shows in the paler shades of their skin in comparison with other tribes. There is common confusion between them and the less numerous, dialectally distinct Punan.

Prince Charles caused outrage in Malaysia when he accused the country of collective genocide over the Penan. The Malaysian government maintained that it simply wanted the Penan to integrate with society for their own sake, attempting (unsuccessfully) to lure the hunter-gatherers to settle in luxurious longhouses; meanwhile, the logging continued.

The dispute continues, with Penan leaders maintaining that without the forests they ‘become poor and lose our homes, with no hope of good jobs. Our children are robbed of their future and their heritage. We have the right to live in the lands of our ancestors, just as you do.’

According to Malaysian and international law, the Penan have clear land rights and must be consulted before any logging can proceed, but these rights are often openly violated.