In an extract from Me, My Bike and a Street Dog Called Lucy, Ishbel Holmes details her encounter with a group of hunters in Yenice, Turkey. 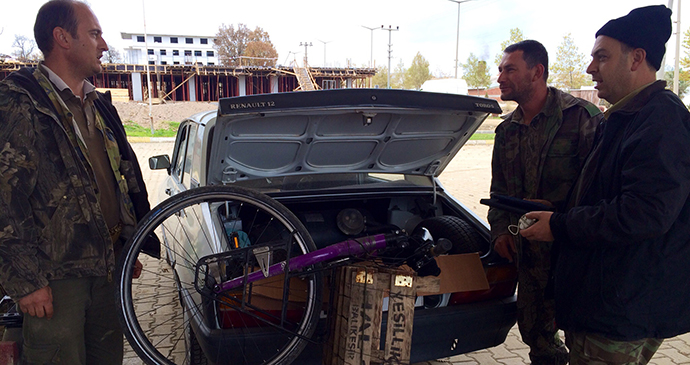 I was heading south through the Çanakkale region when I cycled into the town of Yenice, 150 kilometres from the western coast of Turkey, and pulled into a petrol station to charge my phone. Men dressed in hunting gear with rifles beside them sat eating breakfast at a red plastic table outside the café. One spoke a little bit of English, and he introduced the whole group to me, cheerfully explaining that they were going hunting. I didn’t like hunting, and so immediately, I didn’t like these men.

He asked what I was doing, and I explained that I was from Scotland and was cycling the world. No-one ever believed me when I said this. I was a 37-year-old woman on my own, and for some reason this was just too ridiculous to imagine. People always asked me where my husband and children were, and my answer – that I had neither – caused great shock.

They invited me to sit down. I didn’t like the thought of sitting down with them, but there was nowhere else to sit where I could watch my phone charging. I called Lucy over, but she wasn’t going near any shop entrance and instead remained by my bicycle, watching me. The men finished eating, and I asked if I could feed my dog their leftovers. I patted my knees and called Lucy over. The men looked concerned seeing her limp and her deformed paw. I explained our story, which the one man translated back to his friends. They asked me if I wanted them to shoot her. I declined politely, telling them if they shot Lucy, I would kill each one of them with my bare hands. Everyone laughed, apart from me. When they saw I wasn’t laughing, they explained they liked dogs and had only offered to shoot her in order to save her suffering.

A small police van pulled into the petrol station. It was the first opportunity I had seen for a lift that would not include the driver asking for something in return. Even 15 kilometres would be welcome. I walked over and asked if he would drive Lucy and me to the next town. I must have been desperate because when he said no, I turned away and immediately burst out crying. The hunters asked why I was upset, and I explained that men kept stopping and asking me for sex and that dogs attacked Lucy. The hunters motioned for me to sit back down and said that they would help. After making a few phone calls, they found out that one of their friends was driving a truck and would be passing a point about 30 kilometres away in a short time. They walked over to an old rusty car, speaking to one another in Turkish. Opening the boot, the English-speaking man told me to get my bicycle.

‘There’s no way my bike is going to fit in there,’ I exclaimed. ‘Yes, it will,’ he assured me, and the others nodded vigorously, smiling. ‘You are getting that truck. He is our friend and there will be no harm to you.’

I dismantled my bicycle and gear, and they tried to get it all inside their car. It seemed utterly impossible that it was going to fit, but their positive attitudes and repeated attempts had me doubled over in laughter. Defeat was not in their vocabulary, and when the boot finally closed with bike and gear inside, we all cheered and clapped.

There was really only enough space for the driver, Lucy, and me, but another of the hunters managed to squeeze in, too. We said our goodbyes and set off. I didn’t think we had nearly enough time to reach the truck, but the men kept saying we’d make it, and I found myself a passenger in a terrifying Formula One race through the narrow twisting tracks of rural Turkey. And then suddenly, there was a truck, parked on the side of the road in the middle of nowhere.

To read more of Ishbel and Lucy’s story, click here: