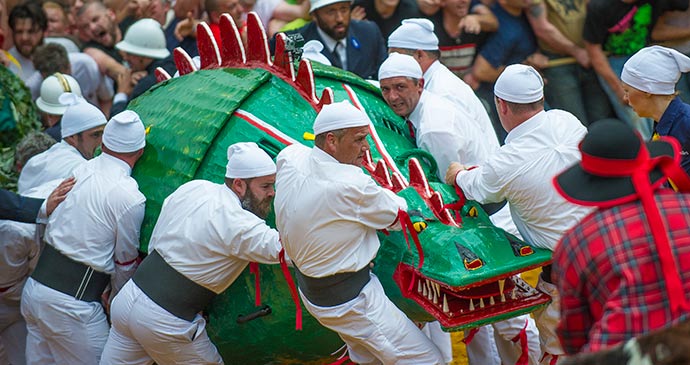 The Ducasse de Mons, popularly known as the Doudou, is the city’s great festival – a festival which has now been designated by UNESCO as a Masterpiece of Oral and Intangible Heritage of Humanity. It takes place every year on Trinity Sunday, which can occur from late May to mid-June. It is said to date back to 1348–49, when the city was suff ering under a severe plague. On the initiative of the Canonesses of St Waudru and the other city authorities, the reliquary of St Waudru – patron saint of the city – was paraded through the streets and the plague miraculously receded. Ever since, the people of Mons have paraded the reliquary to give thanks to the saint and ensure the future health and happiness of the city.

Serious events begin on Saturday evening when the precious reliquary is ceremoniously lowered on its shelf above the altar in the Collegiate Church of St Waudru, and solemnly entrusted to the city mayor. A chant of ‘Doudou’ greets this moment, reinforcing the popular name for the Ducasse (a widely used word for a traditional festival in Belgium). The following morning the reliquary is placed on the Car d’Or (Golden Chariot); a team of six horses pulls this heavy wagon – and the priest and choristers riding on it – around a circuit of streets. It is preceded by a procession of some 60 groups, representing historic guilds, confraternities, societies and religious orders, uniformly dressed in elegant medieval costumes,  some carrying religious statues and reliquaries. As the chariot returns to the Collegiate Church at about midday, a large crowd gathers behind it to push it up the hill, which it must do in one uninterrupted movement in order to secure the good fortune of Mons. On achieving this, the cry goes up ‘Et les Montois ne périront pas!’ (‘And the people of Mons shall never perish!’)

Back on the Grand-Place a battle – called the Lumeçon – now begins between St George on horseback and a cheery-looking green dragon. St George is supported by ‘Chin-Chins’ in horse-skirts; the dragon’s body is operated by ‘Men in White’, and the tail by green ‘Leafmen’; policemen, fi remen and devils also circle. It is considered lucky for a member of the crowd to be able to pull a horsehair from the dragon’s tail. For about half an hour, to the accompaniment of the ‘Doudou’ chant, St George attacks the dragon with a lance and a sword, and then a pistol, and finally dispatches him with a pistol shot, bringing this joyous pantomime to a close. The battle participants then rush off into the courtyard of the Hôtel de Ville as the public chant again ‘Et les Montois ne périront pas!’ A number of events take place in the days leading up to the Ducasse, including a free concert in the Grand-Place on the Friday and Saturday evenings, and they carry on with fi reworks on Tuesday. The following Sunday the ‘Petit Lumeçon’ takes place, performed by children, and ending with fireworks in the evening.