The Dictator’s Highway is a recent book (January 2015) written by Justin Walker. Walker lived for a number of years in Santiago, working as a head teacher in a private school, and despite exploring much of the country, had never made it to Aysén. One day, he packed his rucksack and headed south, hitchhiking and bussing the length of the Carretera, starting at Villa O’Higgins. This travelogue is superbly written, witty and observant. While light on the practical information required to explore the region, his descriptions of the wildlife, stunning vistas, perpetual logistical challenges and astute observations about the culture and traits of those who live in the region, are an utter pleasure to read. Dependent on public transport and hitching much of his adventure is along the main Carretera Austral, and not along the various off-shoots (although he does go to Raúl Marín Balmaceda). Combined with his experiences living for a number of years in Santiago he is able to make interesting observations about Chilean culture and the idiosyncrasies of the south, weaving travel writing with history and economics seamlessly. He shines a penetrating light into the Chilean education system, partially explaining the civil unrest that has plagued the country, including Aysén, over the last years.

The book doesn’t aim to explain how to travel along the Carretera – this guidebook seeks to plug that gap, and interestingly one of Walker’s principle gripes throughout the book is the poor nature of current guidebooks! Instead he eloquently describes why to embark on such a journey, and above all, does so in a very amusing and readable manner. His vivid descriptions of the kindness afforded him by local residents are heart-warming, and consistent with our own experiences. He also touches on many of the geopolitical and environmental challenges in the region, particularly the relentless need for economies to grow continuously without regard for the damage they leave in their wake. His book is a discreet plea to industrialised Chile: please, leave this one remote region of the country alone! 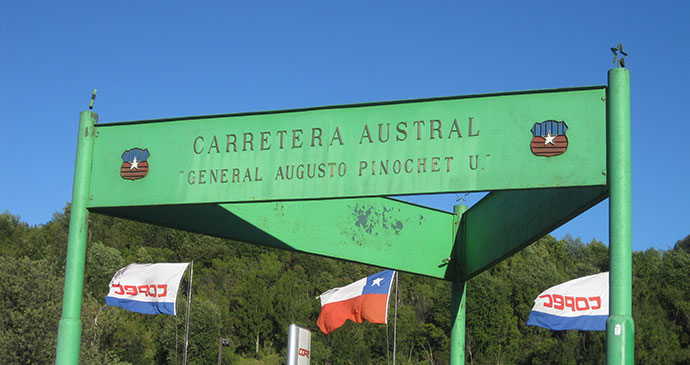 A rare monument to Pinochet in La Junta © Hugh Sinclair

“One intriguing thing about Chilean Patagonia was how recently the human story had unfolded there. So wild and unexplored was the region that even the border between Chile and Argentina was yet to be fully agreed. No significant human settlement had been established until the twentieth century, and the towns count their histories only in decades… All this development was made possible, or at least had been greatly accelerated, by the region’s most influential recent change: the construction of the dictator’s highway. Inevitable calls for development will increase the pressures on the region. Decades ago, early colonisers cleared acres of forest by lighting fires that burned for years. Today, the contrast between the forested north and the denuded grazing land further south is horrifying. You could argue that razing the forests represented progress in a direction that was good and beneficial, or you might think not. As Chilean young people become leaders and discuss plans for Patagonia and her natural riches, they might do well to consider the impact of those fires in order to guard against rehashing the mistakes of the past”.