In the 1960s the Bedouin of the south had an almost unimaginably harsh lifestyle. They owned nothing save their camels, goats and a few leather bags. The children would sleep squashed among the goats. Their close dependence on nature, where they could perish if a well dried out or a camel died, gave them a deep sense of the will of Allah, and the Quran was their only education. Even though they had so little, the rule of the desert was to share with guests and unexpected visitors, even if this meant their own family going without. No Bedu would eat or drink until their companions had all reached the water well; no-one would take more than their share. Petty theft within a tribe was despised as dishonourable, yet it was acceptable, even manly, to raid another tribe’s camels and kill the tribespeople in order to steal for your own. This illustrates the overriding loyalty to one’s family and tribe above all other considerations; an outsider is often a secondary consideration. 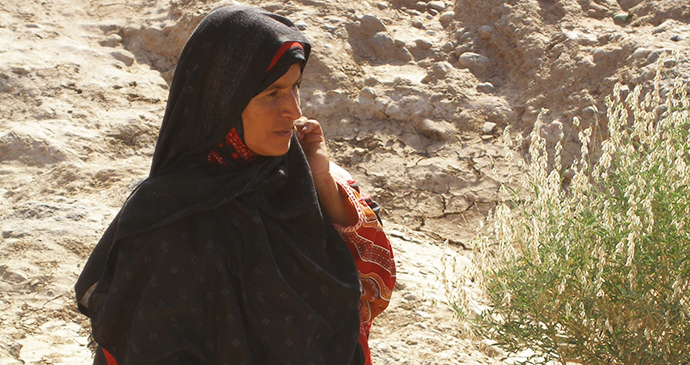 A woman at a Bedouin camp © Diana Darke

In her book The Southern Gates of Arabia, Freya Stark observed: ‘Crime is practically unknown in the Hadhramaut; such things as robbery and murder, being done according to established rules, come rather under the heading of legitimate warfare.’ Blood feuds are also a question of honour; they are not crimes. The camel – the lifeblood of the Bedouin – does not normally sweat until its body temperature exceeds 104°F, thereby conserving its water for long periods even in excessive heat. As such, the Bedouin were able to rely on camel milk in the desert long after their own water ran out. A Bedouin was said to be able to tell from the footprint of a camel who its owner was, when and where it had drunk last by the amount and frequency of the droppings, and in which wadis it had last eaten, from their texture. If one Bedouin owned she-camels, he would arrange a meeting with a he-camel belonging to another man and borrow its services in exchange for milk or food.