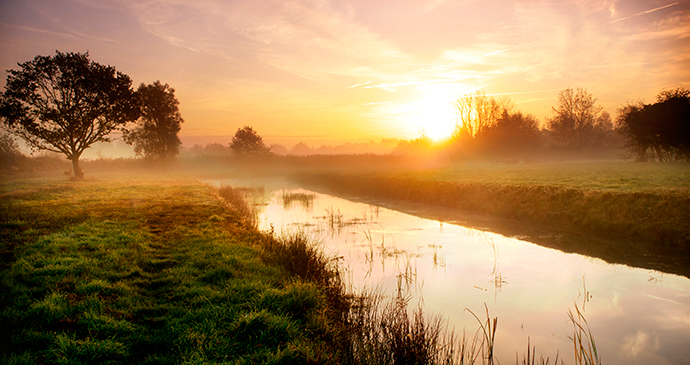 The Waveney Valley is a fine place for walking and there’s a wide choice of lovely walks to be had, particularly alongside the river itself.

I did this long-distance walk in midwinter, over eight days of the coldest weather to hit East Anglia so far this millennium. I started each stage from my home in Norwich, using public transport to reach the day’s trail head. Some of the bus and train connections were tight but it was all just about feasible – on weekdays at least. The first section involved a lengthy stretch along the south bank of Breydon Water, always at its best on bright, frosty days when the water sparkles and migrant waders work the mud. The waymarked footpath left the estuary at Burgh Castle to dawdle through the dormitory village of Belton, probably the dullest stretch along the entire route. After skirting a golf course, the way led across fields to pass the Redwings Animal Sanctuary where I was delighted to see a large number of the eponymous winter thrushes congregating in the paddocks. After passing two charming churches – first, thatched and round-towered Fritton St Edmund’s, then Ashby St Mary’s, isolated among fields – I arrived at the slightly eccentric estate village of Somerleyton. Next day, I followed the railway line east along the marsh edge to wind up at Oulton village.

The stretch from Oulton Broad to Beccles followed the bank of the Waveney for much of the way – an elemental landscape of water and grazing marsh. Beccles to Earsham came next: hard work on my chosen day because the ground was frozen solid. I slithered my way out of the town, past Roos Hall then through fields that looked down upon the Waveney and picturesquely frozen marshes that, with only the distant thrum of traffic to remind one of the 21st century, resembled a scene from a Constable painting.

Emerging at the hamlet of Shipmeadow, I crossed the A143 to head across fields next to a converted workhouse that was now a desirable residence but which must once have been a miserable place to live. Close to the ruins of Mettingham Castle, I followed a timeless green lane lined with coppiced hazel and, before I knew it, found myself gazing down on Wainford Mill just outside Bungay. 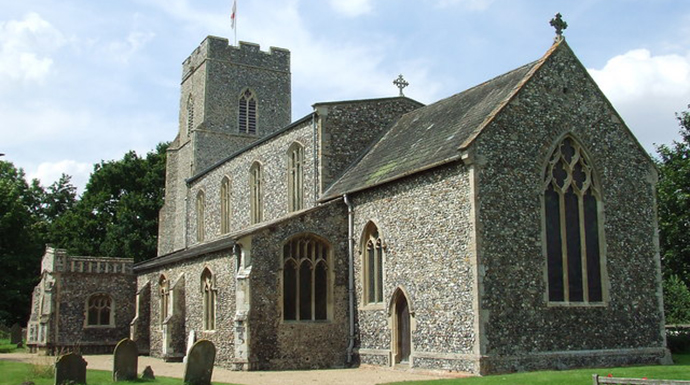 The village of Mendham is known for its beautiful meadows and is home to the Church of All Saints © Keith Evans, Wikimedia Commons

Rather than diverting into Bungay, the Angles Way crosses back into Norfolk here to follow the meander of the river. I took the track through woodland above Ditchingham Lodge and, arriving at Earsham Mill, crossed into Suffolk once more to traverse lush riverside meadows as far as the village of Mendham. After a gentle climb up the north side of the valley I arrived in Harleston. The next leg followed the south bank of the river as far as Brockdish, where the way crossed a bridge back into Norfolk and, after climbing and skirting the village churchyard, I followed another lengthy stretch of green lane and farm tracks across beet fields to end up in Scole. Arriving at Diss Mere the following day, I found the resident ducks looked rather confused by the frozen state of things. I headed west out of town alongside Roydon Fen to reach the gorse-covered heath of Wortham Lings and eventually arrived at the source of the Waveney (and the Ouse) near Redgrave after a splendid leafy section through the woodland area of the nature reserve. 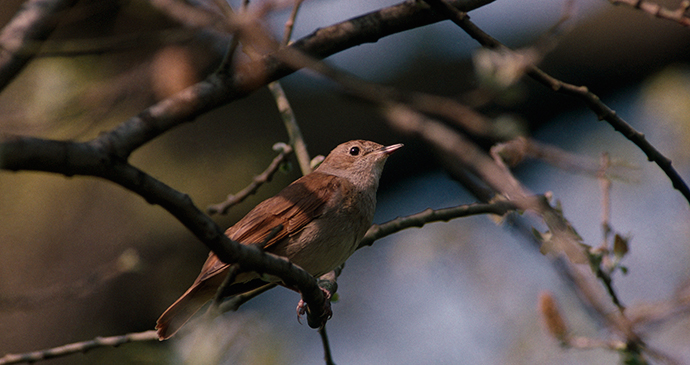 Suffolk’s countryside is full of wildlife including numerous species of birds, such as this nightingale © Andy Hay, rspb-images.com

A final day’s walk brought me to Knettishall Heath in Breckland where future options awaited me: the Peddars Way north to Holme-next-the Sea or the Iceni Way to Thetford and Hunstanton. I had walked around 80 miles in total – perhaps more like 90 – and had encountered virtually no-one along the way give, or take the odd dogwalker. For those in search of tranquility and midwinter exercise, walks like this certainly have plenty to recommend them.

Does this wintery walk sound like you? Find out what else this region has to offer with our brand new guide to Suffolk: