Although Amerindians comprise a mere 3.7% of Suriname’s modern population, they are the only ethnic and cultural relict of pre-Columbian times. They are also known as Indiaan, Inheemsen (Dutch for ‘Indigenous People’) or Ingi (a derogatory Sranan Tongo name), but the preferred term used to refer to them collectively is Amerindian (partially to distinguish them from latter-day Hindustani migrants from India). In practice, far from being a collective entity, the Amerindians of Suriname are represented by as many as eight distinct cultural groups, most of whom live in relatively remote villages and small towns scattered along the rivers of the interior. Running roughly from north to south, these are the Karina (or Carib), Lokono (or Arawak), Tiriyo (or Trio), Akurio, Wayana (or Wajana), Sikiyana, Tunayana (or Katwena) and Mawayana. None of these groups number more than a few thousand today, and some are represented by fewer than 100 individuals. The Karina and Lokono, both relatively large groups associated with the coastal belt, are now mostly Christian, schooled in Dutch, and otherwise quite exposed and integrated into modern Surinamese culture, though traditionalists who speak the Karina language still exist in some areas, for instance the village of Galibi. 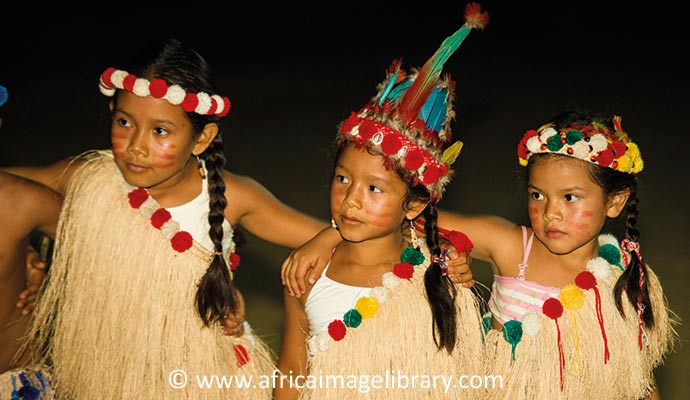 Though some of the Amerindians of the sparsely populated interior have converted to Christianity, most still adhere to traditional animist beliefs, which typically treat the jungle as a potentially dangerous spiritual realm wherein all living creatures have a dualistic nature, possessing both a physical body and a soul, which may or may not be in mutual accord. Here, many people still subsist largely as their ancestors did, fishing in the rivers and collecting edible vegetables or hunting (in particular monkeys and iguana lizards) in the jungle. The characteristically softspoken Tiriyo are numerically the largest Amerindian group in the interior, followed by the more culturally outgoing Wayana. Minority groups are the Akurio, some 50 of whom live in a few family units alongside the Tiriyo in Tepu, Palumeu and Kwamalasamutu; the Mawayana (Frog People) who are represented in Suriname by a few elders (mostly Christian converts) integrated into the Tiriyo community at Kwamalasamutu; the 80-strong Sikiyana, also now based at Kwamalasamutu, who are renowned for their knowledge of medicinal plants and are also regarded as highly spiritual, even shamanistic; and the Tunayana (Water People), around 120 of whom are divided between Kwamalasamutu and Alalapadu. Though many Amerindian tongues are mutually unintelligible, which is hastening the death of minority languages, elements of the vocabulary have made their way into several European languages: familiar words with Amerindian roots include canoe, potato, jaguar, maize and iguana.