Almost everything about this animal – which may reach 4m at the shoulder and weigh six tonnes – is extraordinary. Mature elephants require 150kg of food each day (large ones even more) to fuel that bulk and can drink 200 litres in one sitting. The trunk is much more than just an elongated nose: it is an amazingly strong multi-purpose tool that can pick up anything from a peanut to a fallen log. It is used for feeding, drinking (holding up to 20 litres of water), smelling, breathing (even as a snorkel in deep water) and fighting. The huge earflaps are extremely thin, criss-crossed with a dense network of blood vessels on the underside, and act like a car radiator to cool the animal’s blood by as much as 5˚C. The ivory tusks are enlarged incisor teeth that serve for fighting, digging for roots and stripping bark, and are frequently used in conjunction with the trunk to rip off branches. 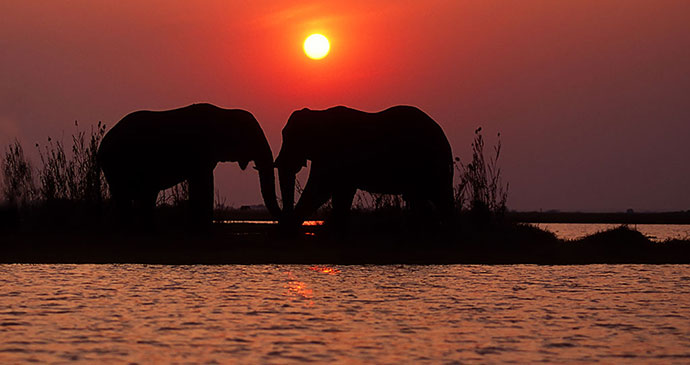 Although Lake Kariba is renowned for its fishing you may also catch a glimpse of the magnificent African elephant © Shutterstock, EcoPrint

An elephant’s acute senses of hearing and smell combine to warn of danger several kilometres away. One night I watched a series of elephants passing along their regular trail and was amazed to see each stop to sniff the ground at precisely the spot where I had briefly stood chatting to two people a full two days previously. It is believed they can communicate over great distances using very low-frequency ultrasound, and research is currently being conducted to establish whether their feet act as long-distance vibration receptors.

Small family groups of females and youngsters are led by an older, experienced matriarch, while the adult and sub-adult males form their own bachelor groups or roam singly. Elephants are extremely sociable animals, and one of the finest sights in Africa is to watch many of these groups coming together, greeting each other, and displaying what appears to be affection. Temporary herds sometimes several hundred strong may gather during the dry season in areas where food or water is concentrated. 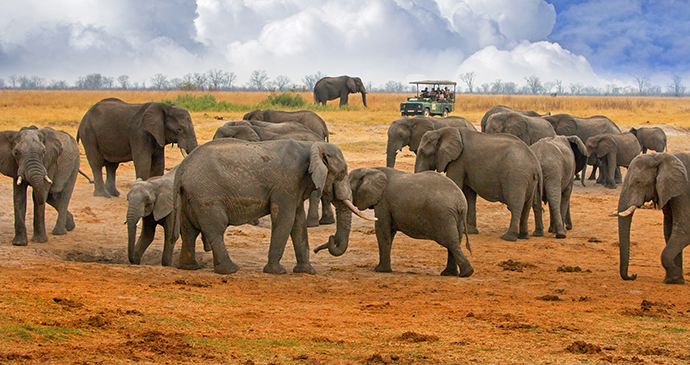 Hwange National Park has one of the largest elephant populations on earth © Paula French, Shutterstock

A female elephant may mate with several males at any time of the year and, after a gestation period of 22 months, gives birth to a single calf, usually at night, weighing around 120kg. The youngster suckles for several years from teats that, unusually in mammals other than primates, are situated between the front legs.

An elephant cannot run, technically speaking, because only one of its feet can leave the ground at a time, so it just has varying speeds of walking. But don’t be fooled: these huge animals can accelerate remarkably quickly and reach an impressive, not to say alarming, pace.

Inspired to discover more about Zimbabwe’s impressive wildlife? Get 10% off our guide: