In this extract from her book, A Cheetah’s Tale, Her Royal Highness Princess Michael of Kent recounts her first week spent with Tess, an orphaned cheetah cub.

That first week, when I spent all day and every night caring for the little cub, I could not have managed without Eduardo’s [the local Portuguese vet] guidance. Oh, how I welcomed his daily visits! He advised me to mix a little egg yolk into her milk, as well as crushed vitamins he added to her bottle to compensate for the lack of nutrients from her mother. Later, he said, when she was taken outside on to the grass, she would encounter worms and bugs, and her immune system must begin building up from the beginning. 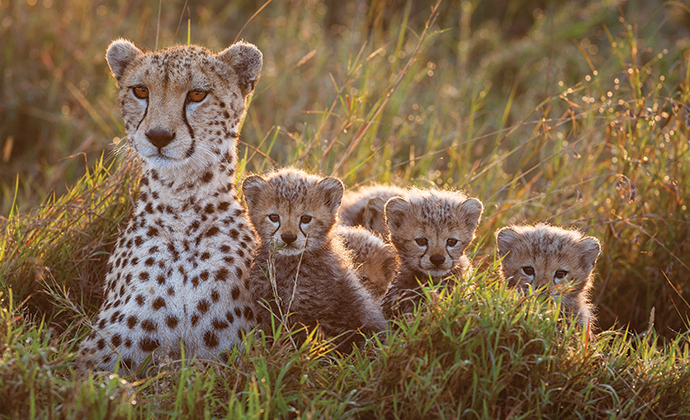 Orphaned cheetah cubs lack vital nutrients from their mothers – when looking after Tess, Princess Michael had to learn how to compensate for this © Jonathan and Angela Scott

When Papi noticed Daisy had moved into my room, he asked with a certain male disdain, ‘Why should a Ridgeback be willing to adopt a baby cheetah? She has had her own puppies and knows this is certainly not one of them.’ But, amazing as it seemed, she did – and even licked little Tess all over, just as her mother would have done. Such a relief for me! Watching Daisy carefully turning the cub with her nose and tongue to clean her and then encouraging her to crawl, pushing Tess with her nose on to all fours, surprised me completely.

Between the loving and feeding, it did not take long before Tess was as tame and dependent as a domestic kitten, following me, crawling slowly around my bedroom, dressing room and bathroom area on wobbly little legs, chirping softly, occasionally plaintively. Then I would pick her up and wash her just as I had been taught by both Eduardo and Benedita. Benedita had replied promptly to yet another of my letters and her information was invaluable, since she had also played the full-time maternity role.

I noted in my journal that in those first weeks I never slept more than two hours at a stretch before Tess would wake and demand milk or attention. Her little face was smooth, but almost all of her back was covered in a sort of fluff – not as strong as fur on a coat, and a beige-honey grey in colour. Eduardo explained that this was called a ‘mantle’. 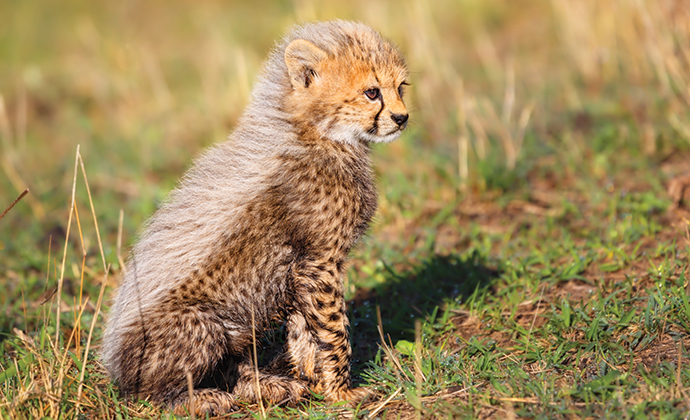 ‘Even today, no one seems quite sure why cheetah cubs grow this extra fluffy coat on their backs’ © Maggy Meyer, Shutterstock

Even today, no one seems quite sure why cheetah cubs grow this extra fluffy coat on their backs, but one theory is that it forms a camouflage when their mother takes them out hunting with her. She leaves them squatting in long grass until she is done and is ready to escort them back to their lair. If alone and threatened from above by birds of prey, the cubs can hunker down and their thick mantle makes them look a bit like a honey badger, a fierce little animal that not even birds of prey like to take on. In the heat of the East African summer, I wondered at nature’s wisdom in adding an extra blanket to the little cheetah’s coat, but perhaps this was the answer. On her tummy, legs and tail Tess had shorter, dark fur with a thick congregation of black spots. Her tail was short, bony and thick, nothing like the long, elegant rudder it would become. But while her walk was still quite unsteady, and she would often topple over and sit, that little tail, as thick as my forefinger, already stuck out and was used to balance her.