When people from other countries have a tea break or a coffee break, Paraguayans have a tereré break. When Paraguayans drink mate, it tends to be a more solitary custom in the early morning, as a wake-up drink – unless the weather is very cold, in which case they may drink mate during the day as well. Unlike the Argentinians, Paraguayans never put sugar in mate. 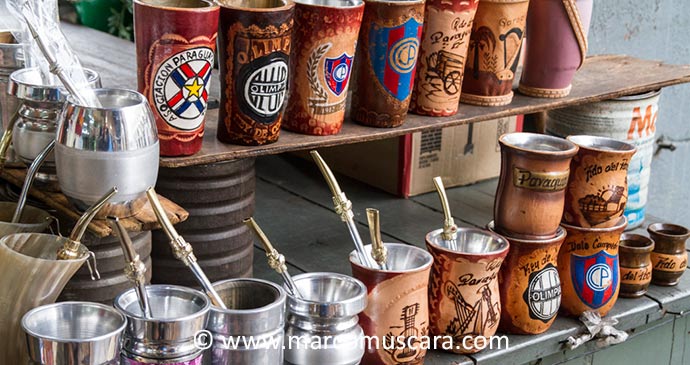 When people from other countries have a tea break or a coffee break, Paraguayans have a tereré break © Marco Muscarà

Both mate and tereré are made with yerba mate, which means ‘mate leaf ’, but people usually just say yerba for short. The cup for the leaves is called a guampa, and there are different types for tereré and for mate. For tereré, a cow’s horn is generally used, with the point cut and filled in with a wooden stopper, so that it will stand up. For mate, people usually use a wooden guampa, because it has to be something with insulation against the heat of the water. In both cases a metal straw is used, called a bombilla, which has a flattened end with a strainer on it, so that the yerba leaves do not pass up the straw. Only one guampa and one bombilla is used, and it is passed around the group for each to drink in turn. This can be found distasteful by many foreigners, who are afraid of getting infections, but in fact that is very unlikely, although not totally unknown.

Just as there are two kinds of guampa, there are two kinds of vacuum flask. The one that holds hot water for mate is similar to the kind of Thermos you can buy in other countries. But the kind for holding iced water has to have a much broader mouth, because the ice is made in thick bars of about 4cm diameter. This fat kind of vacuum flask uses polystyrene as the insulation material, and is very light to carry. Beautiful souvenir vacuum flasks are made with a decorated leather casing, and guampas can have details of silverwork on them. You will see a lot of these in Luque.

Along with the yerba it is customary to add other plants, which are known as remedios, because they have medicinal qualities as well as enhancing the flavour. These are usually mashed in a pestle and mortar, and can be added to the yerba in the guampa, but are more often added to the iced water in the flask. Some yerba mixtures come ready prepared with remedios, usually mint and boldo. Other remedios used (some for mate, others for tereré) are burrito, cedrón, eucalyptus, aniseed, camomile, avocado leaves, sage, and other plants with untranslatable Guaraní names. When you go to somewhere like Mercado Cuatro in Asunción and see a variety of strange green leaves or roots laid out near a large pestle and mortar, these are remedios to put in tereré or mate.

Growing yerba is very difficult, and depends on the right kind of soil, which is found only in this region of South America. Under the Jesuits, the Guaraní became expert at it, to the point where the major part of their export sales was for yerba maté – which became known as ‘green gold’. Aimé Bonpland also became proficient in its production, 50 years after the Jesuits were expelled.

A plantation of yerba trees is called a yerbal. After the leaf is plucked, it has to be dried and lightly toasted, mashed into little pieces, and then stored for several years in a dry place for its flavour to develop, before finally being packeted. The Selecta yerba mate factory in Bella Vista welcomes visitors, to show them their production process. Yerba mate is a stimulant, a digestive and a laxative. Because of its very bitter flavour, you cannot eat while drinking tereré, and so it also acts as a dietary aid.

Learn more about this Paraguayan drink in our comprehensive guide: