I was lucky enough to have been a student at Moscow University at the time, so in May 1960 I was perhaps the first British visitor.

For 15 years after World War II, Tallinn was a closed city, nestling amongst the forest of defensive (offensive) weaponry trained on the NATO countries. Suddenly in 1960 it was opened to Western visitors. I was lucky enough to have been a student at Moscow University at the time, so in May 1960 I was perhaps the first British visitor. Diplomats kept away until independence in 1991 because according to the bureaucrats a visit would have implied recognition of the Soviet occupation.

I not only went there by train from Leningrad but stayed illegally in a private house for the first and only time during the 25 years that I knew the Soviet Union. Far from being worried that I would bring trouble on their heads, the occupants barred the exit and refused to let me out until I had agreed to stay for three nights, having found my photograph displayed on their wall! 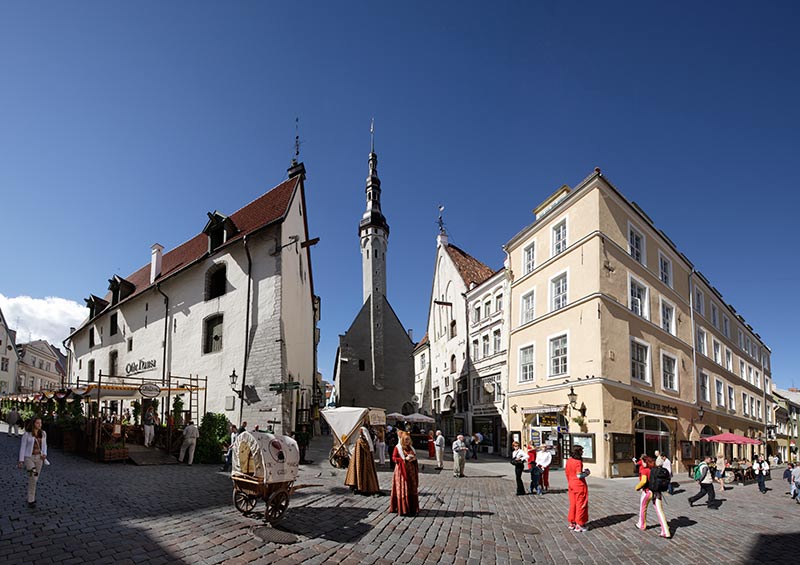 Many aspects of Tallinn have changed since 1960, but the Old Town is still the centre of life in the city © Visit Estonia

How did this come about? In 1958 the Soviet authorities allowed a few handpicked theological students to study abroad. One from Riga and one (Pastor Kaide Rätsep) from Tallinn arrived at Wycliffe Hall, Oxford, while I was there. As I was a graduate in Russian, we gravitated towards each other. The next year, the door suddenly opened to me to study in Moscow as a member of the first-ever exchange programme with the USSR and I met Pastor Rätsep there when he was in transit to London. I promised I would call on his family if ever the opportunity arose.

It did. On arriving in Tallinn, I took a suburban train to the (as it still is) upmarket suburb of Nomme with its large wooden houses among the trees, looking more like Scandinavia than the Soviet Union. Maps of any practical use were unobtainable, being considered items of military intelligence, so I had to ask my way to the Rätseps’ house. A rare Russian speaker eventually pointed me down one of the many paths cut into sand and I found a two-storey house separated from its neighbours by a wooden fence and a strip of pine trees.

Later I would meet Enid’s brother who sang me Harry Lauder songs while marching me through the streets of medieval Tallinn. Thirty years later I reflected on whether this might have been a preview of the Singing Revolution.

I knocked on the bright green door. A man with grey hair put his head out of an upstairs window before coming down. We had no common language, but I mentioned the name of the person who turned out to be his son. He invited me in, and there on the wall was the photograph of the Wycliffe Hall student body of 1958.

He simply would not allow me to leave and I somehow understood that I must await the return of his daughter-in-law. I was anticipating a conversation of a few words, knowing how elementary Kaide’s knowledge of English had been when he arrived in Oxford. On the contrary, Enid Rätsep was bilingual, having been born in free Estonia of an English mother. The family at home had always spoken English, a tradition not entirely dead in 1960. Their 12-year-old daughter spoke it quite well. Later I would meet Enid’s brother who sang me Harry Lauder songs while marching me through the streets of medieval Tallinn.

Thirty years later I reflected on whether this might have been a preview of the Singing Revolution. I could hardly believe I was in the Soviet Union. Lampshades and bedspreads were of British pre-war manufacture. I slept in Kaide’s study with a bookcase of German and English theology behind my pillow.

All of us, as if by common agreement, steered clear of the topic of the Soviet occupation but the family thoroughly organised my time for the next three days. After eight months in drab winter Moscow, the elan of ancient Tallinn in its bright spring colours took me into a new world. A visit on Sunday to Kaide’s Lutheran church, Charles Church, left mixed impressions.

I could hardly believe I was in the Soviet Union. Lampshades and bedspreads were of British pre-war manufacture. I slept in Kaide’s study with a bookcase of German and English theology behind my pillow.

Strangely, the family did not want to accompany me. This huge church was about half full, with 40% of the congregation younger people, a far higher proportion than one saw in Russia. I tried to see the pastor after the service, but the corridor was blocked by dozens of young people waiting outside his door. None of these, to my surprise, would speak to me, although most must have known Russian. I surmised they were waiting for religious instruction, illegal under the Soviet system at the time, and were unwilling for a foreigner (or a Russian if they took me for one) to intrude.

On my final day, having purchased an air ticket to Riga, I was waiting on the tarmac beside a small aeroplane. An official came up, took me inside and told me my intended flight was illegal for a foreigner. ‘Our rules are less strict than yours in Britain for Soviet citizens,’ he said. ‘When I was there, I was prevented from visiting many places. You can go where you like, but not always by your chosen route. Visit Riga by all means, but you must do so by train via Leningrad.’