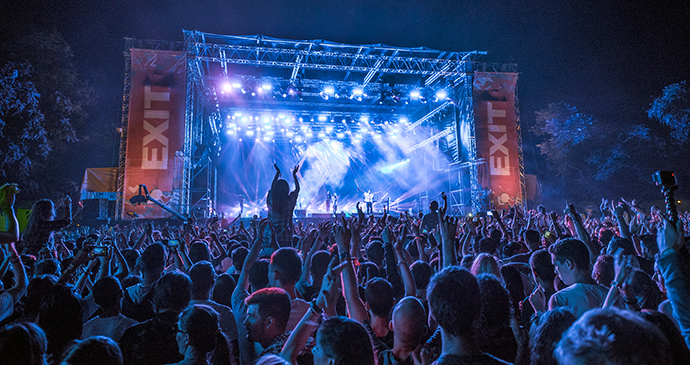 Exit’s plan was twofold: to provide entertainment for Serbia’s youth and to raise political awareness and engender anti-Milošević protest.

The festival first began in 2000, a very critical year in Serbia’s history, as the brainchild of two university students Dušan Kovačević and Bojan Bošković. The plan was twofold: to provide entertainment for Serbia’s youth and to raise political awareness and engender anti-Milošević protest. The first festival stretched through the summer of 2000 and took place at various stages around the campus of the University of Novi Sad and the Danube’s left bank. Serbian bands like the Orthodox Celts, Eyesburn and Darkwood Dub put in appearances several times over the summer months and the event finally came to an end on 24 September, just two weeks before Milošević’s fall from power.

In 2001, the festival moved across the Danube to its present site at the Petrovaradin Fortress. The ethos behind that year’s festival was a twofold celebration: of being finally rid of Milošević and also of Serbia’s opening up to the wider world after years of isolation. EXIT – Noise Summer Fest, as it became known, received generous funding from the new authorities in Belgrade, who wanted to be seen to visibly support the event and who actually attended in considerable numbers, hungry for the photo opportunities it offered. This time, instead of lasting all summer, the event was over a more manageable nine days. It was an enormous success.

EXIT 2002 brought in more DJ acts and foreign artists like the Asian Dub Foundation, Transglobal Underground and Roni Size. Despite success on the ground, the event, again over nine days, ended up making a loss of €300,000. This led to claims of financial mismanagement along with public criticism that the event was too long and had too few big international stars. In response to this, EXIT 2003 was shortened to four days and was more aggressively advertised by its ‘State of EXIT’ marketing campaign. There was a noticeable shift towards the commercial with each of seven stages having a separate commercial sponsor. The change in philosophy seemed to work and, that year, international acts such as Tricky, Misty in Roots, the Stereo MCs, Chumbawumba and Soul II Soul all performed to ecstatic crowds.

EXIT 2004 had a troubled start. Three weeks before the event one of the organisers was arrested for embezzlement but no charges were ever pressed. To some it looked as if the event was coming under some sort of political persecution. Despite the setbacks, EXIT went ahead and, once again, it was a great success with Iggy Pop stealing the show.

It was around the time of EXIT 2004 that the foreign media started to take an interest. In 2005, the festival was covered by BBC Radio 1 for the first time and awareness of the festival reached a much wider, international audience. This was not all that surprising as MTV had already recorded the festival the previous year. There were concerns this year that the newly elected mayor of Novi Sad, Maja Gojković, the Serbian Radical Party candidate, might become obstructive because of the event’s left-leaning, internationalist reputation. No such thing happened, however, and the city continued to support the festival. This tacit endorsement by the Radicals and the abandonment of a minute’s silence for the Muslim victims of Srebrenica (it was the tenth anniversary of the event) was seen by some on the left as a selling out by the organisers. Whatever the political machinations, the music was as impressive as ever, with international names like the White Stripes and Fat Boy Slim headlining the bill. However, the weather was less impressive, with torrential rain putting a damper on proceedings. Perhaps it was the inclement weather that attracted so many foreigners for the first time. With over 150,000 present, 15,000 were from outside Serbia and a good proportion of these were British. These, no doubt, felt right at home if they had any experience of the UK’s Glastonbury Festival where rain and mud are virtually de rigueur.

EXIT 2006, with Franz Ferdinand (an apposite band name for this region), Morrissey, Billy Idol and the Pet Shop Boys all headlining, had 22 stages in all, featuring a wide variety of musical styles that ranged from hiphop to reggae. For the first time even unknown bands had a chance for their place in the spotlight on the Future Shock stage, which gave everybody an opportunity to perform. Perhaps partly because there was no Glastonbury Festival in the UK that year, there were more foreign visitors than ever, with an estimated 5,000 UK visitors.

The following year saw 190,000 visitors come to the festival, 51% of whom were foreigners according to B92. This was the same year that EXIT won the UK Festival Award for the Best European Festival. By 2012, EXIT attracted up to 200,000 attendees over the whole four-day period, a figure that has been maintained in the years since.

Are you now inspired to rock Novi Sad? Start planning your trip now with 10% off our Serbia guide: