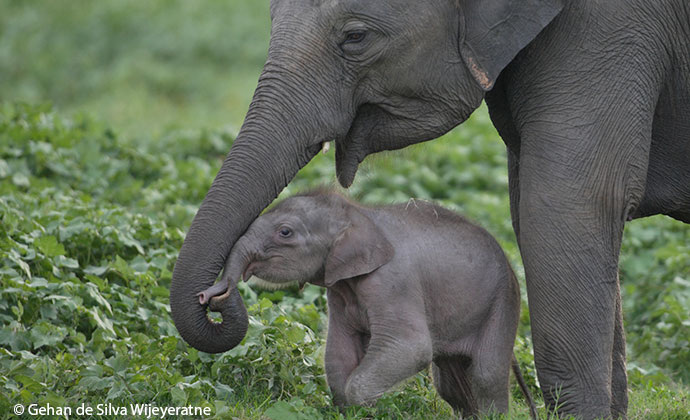 Sri Lanka is an important stronghold for the world’s second-largest land mammal, which is now IUCN red-listed as Endangered, with a total global population of wild animals estimated at 35,000–40,000. Sri Lankan elephants, though appreciably smaller than their African counterparts, tend to be slightly larger and somewhat darker than those found on mainland Asia, and less than 5% of the population (mostly males) bear tusks, which reduces their vulnerability to ivory poaching. Elephants can be seen in most Sri Lankan national parks, with Udawalawe being the most reliable year-round destination, though it is outranked in the dry season by Minneriya, where several hundred individuals gather to drink every evening in the dry season,with numbers usually peaking over August–September. 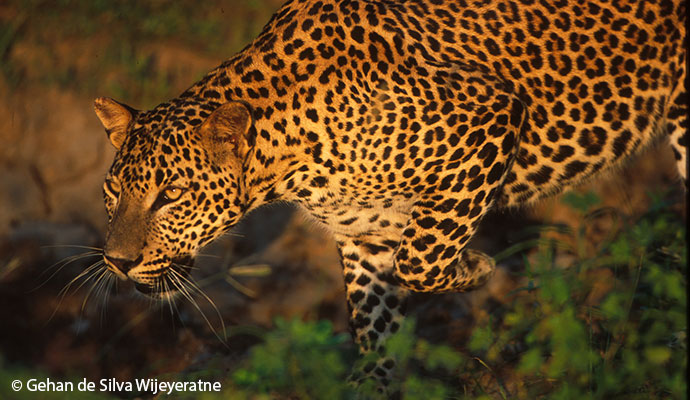 No tigers, lions or cheetahs occur on Sri Lanka, but the island does support its own endemic subspecies of leopard, Panthera pardus kotiya, which is IUCN red-listed as Endangered, though the total population of almost 1,000individuals is actually pretty healthy by modern standards. The Sri Lanka leopard is claimed to be the bulkiest physically of any of several African and Asian subspecies, and it also seems to be less secretive and arboreal, presumably because it has evolved as the island’s alpha predator and thus has no real need to drag kills up trees. It is now largely confined to national parks and a few other protected areas, where it is often quite common and conspicuous – Yala National Park, which hosts the world’s densest leopard population, can offer excellent leopard watching, and other parks such as Udawalawe and Wilpattu also often throw up good sightings. 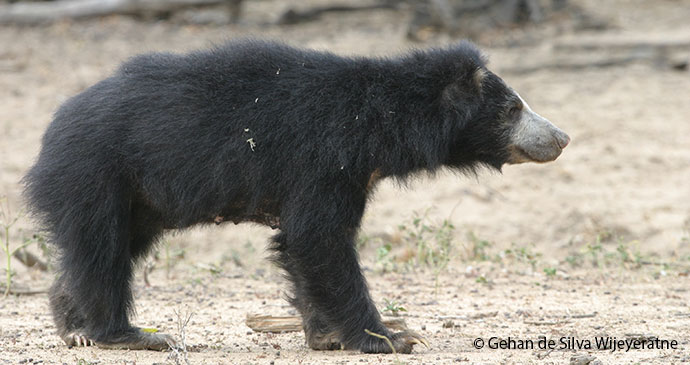 A solitary nocturnal omnivore whose range is centred on mainland India, this distant descendant of the brown bear is named for its heavy sickle-shaped claws, vacuum-like mouth, unusual dentition, and occasional custom of hanging upside-down in trees – adaptations all to a diet dominated by termites, ants and other insects, but which also includes beehives and fruit. The Sri Lankan sloth bear is thought to be a distinct subspecies (Melarsus ursinus inoratus), and is IUCN red-listed as Endangered, with a population estimated at around 500 individuals. It is thinly distributed in most suitable national parks, with Wilpattu having the best reputation for regular sightings, though Yala and Udawalawe also have their moments, usually just before dusk. 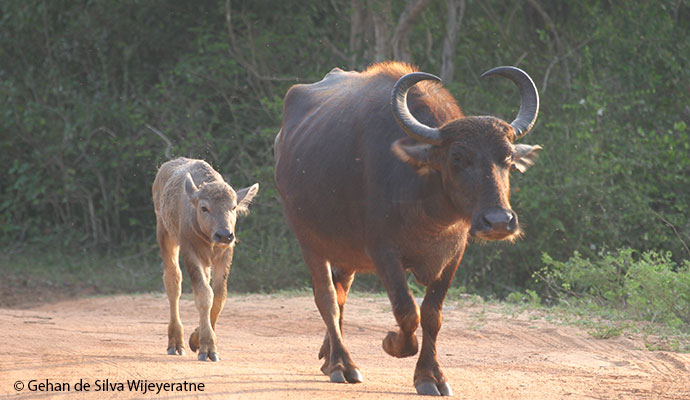 A large ox-like bovid often seen wallowing in muddy pools, the water buffalo is now IUCN red-listed as Endangered in its undiluted wild form, with a global population estimated at around 3,500 centred almost entirely on India. The status of water buffalo in Sri Lanka is controversial. Domestic buffalo, which are probably descended from water buffalo, are common in rural areas, but zoologists suspect that the buffalo populations that occur conspicuously in several Sri Lankan national parks are not actually the real thing, but represent the progeny of domestic animals that went feral at some point in the last couple of thousand years.

Want to learn more about Sri Lanka’s wildlife? Check out our comprehensive guide: