For the first time since the war, there were no communist portraits or slogans, and previously banned religious and patriotic songs were sung instead of the ‘red’ ones that had always been added to the programme.

In 1990, up to half a million people, one-third of the population of Estonia, gathered together in Tallinn to sing the first Estonian programme since the war. The streets and trams were filled with men and women in regional national dress. Crowds reserved places on the pavements in advance to watch the choral procession as it passed through the centre of town and along the coastal road to ‘Song Square’ stadium.

The ancient conductor, Gustav Ernesaks, came by in a horse-drawn carriage acknowledging the cheers with a wave and a nod of his head. (He died in 1994 and in 2004 a statue of him was unveiled in the Song Festival grounds.) ‘Viva Latvia!’ was the cry welcoming a group of Estonians from the southern neighbour and a roar of applause greeted a group of dark, long-nosed Georgian men in crimson suits; but it was the Lithuanians, still suffering from the Russian blockade, who won the loudest cheer. 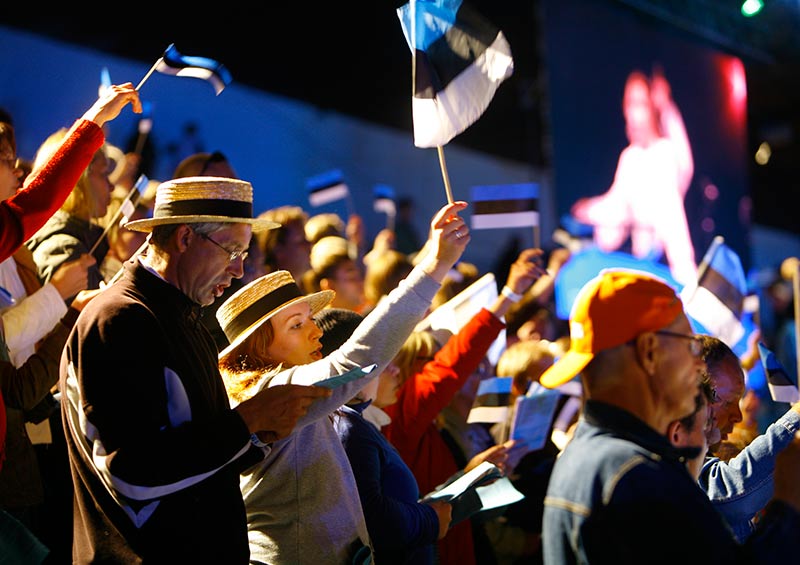 School groups bore banners displaying not the post-war number system but their old, historical names. A choir from a Russian-language school expressed its loyalty to Estonia by wearing costumes of blue, black and white. There was no applause for the choir from the ‘Friendship Society’, the Soviet organisation which had monopolised foreign cultural relations for years and which was to be liquidated a few months later. ‘Horrible,’ said one almost sympathetic onlooker, ‘to be singing in that choir today.’

In 1990, for the first time since the war, there were no communist portraits or slogans, and previously banned religious and patriotic songs were sung instead of the ‘red’ ones that had always been added to the programme. These included ‘Eesti Vabaks’ (Estonian Freedom), which would have led to a one-way ticket to Siberia in previous years for anyone who dared to sing it. Looking down from the sunlit hilltop, over the flood of people towards the giant but remote half-moon-shaped stadium, I heard the song chanted over and over again. It was the only moment resembling anything like a protest in an otherwise relaxed and rather unemotional gathering.

Small shacks set up around the perimeters of the grounds sold ice cream, chocolate, sausages and tomatoes, while hard-currency stalls supplied Czechoslovakian beer to Estonian émigrés and the tiny minority of local Estonians who had any valuta (foreign currency). It was not very fair on the majority. People wandered aimlessly about the grounds during the concert. Others sat on plastic bags and made boat-shaped sun hats out of newspapers.

Small Estonian children collecting beer cans urged Western consumers to drink up fast. An elderly woman went up and kicked two young Estonian men as they lay sprawled out on the grass reading newspapers as the Estonian national anthem was being sung. Later an Estonian friend said: ‘Surely in a democratic society they should be allowed to do what they want?’