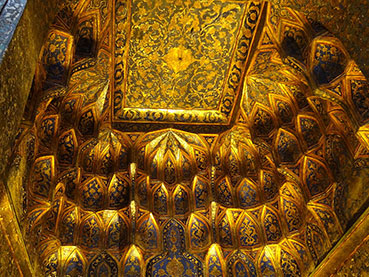 It was Sheikh Safi himself who established a khanaqeh in the 13th century, perhaps on the site of the present Chini-khaneh (Porcelain Room). After his death, his followers built a tomb to honour him and thereafter over the centuries buildings were added, torn down or converted. The main entrance into the shrine complex dates from 1926 when the four or so shops on either side were built, their rents going towards the upkeep of the shrine. This leads directly into a garden laid out in c1834, which today is a favourite meeting place for elderly gentlemen. At the other end a porch from 1629 (heavily restored), leads into a courtyard with ‘very fair and spacious vault[s] arched above, paved without with green and blue [tile] stones’, as seen by one European traveller in 1637. The domed structure immediately on the left, hidden by a large wooden grille, was originally constructed on the orders of Shah Tahmasp I around 1540, perhaps as another khanaqeh, and it is possible that the two Ardabil carpets (if they were ever here) were made for this octagonal building. By 1843 it was in a sorry state, having lost its dome, and it was perhaps at this point that it was turned into a mosque, the Jannat Sura; major repairs were undertaken to this building and in fact to all the tiled façades in this courtyard from 1935 onwards.

A small door takes the visitor into the main building and a long prayer hall known as qandilkhaneh (Lantern Hall); the endowments paid for teams of Quran readers to sit and intone before the tombs. The portal inscription stresses the importance of reading the Holy Book, and it has long been assumed the door and hall were part of Tahmasp’s building programme. However, recent research suggests perhaps both were constructed two centuries earlier. For a number of years it housed a huge vertical loom, as the authorities decided a copy of the Ardabil carpet should be made but, like many projects in the new republic, resources were diverted elsewhere and progress was painfully slow. The massive silver doors were a royal gift in 1602–03, and then ten years later Shah Abbas ordered the hall to be painted and gilded, and silver grilles erected.

A doorway immediately on the left leads into the chinikhaneh, a large octagonal room with plasterwork niches, which once held some of the fine Chinese porcelain pieces from the Safavid court. It is here that the finished copy of the Ardabil carpet is now displayed. In all, over 1,160 pieces of costly, rare Chinese blue and white porcelain and celadon vessels were given by the Safavid shahs, some probably taken as battle spoils from the defeated Uzun Hasan, leader of the Aq Qoyunlu (d1478). In the 1930s about half of these were moved to Tehran for safe keeping. A number of dishes are displayed alongside manuscripts and other historical artefacts. Most of the structure dates from the Safavid rebuilding programme of 1607–11 but, as you will spot, the domed roof is new, dating from 1971.

Returning to the qandilkhaneh, you can explore the other small rooms off to the left housing numerous cenotaphs marking interments in the crypts below. Thick but fine-quality ‘inlaid’ patterned felts cover the floors, getting dirtier and more moth-eaten every year. Important members of the Safavid court, military generals and the royal ladies rest here, including Shah Ismail’s mother and the shah himself with a magnificent cenotaph, presented, so the locals say, by the Indian Moghul emperor, Humayun, in about 1530, in gratitude for giving him refuge during his exile from India.

The haramkhaneh should, as the name suggests, contain the cenotaphs of the royal ladies but as one scholar has noted, at least one of the deceased was the eldest son of Sheikh Safi, who died in 1324 when the room was probably constructed and not, as first thought, the wife of Safi. The tomb chamber nearest that of the Sheikh himself contains Ismail’s large cenotaph and little else, other than deep cobalt blue tiles with stencilled fired gold patterns and smoke-damaged wall decoration. Next door, at the end of the prayer hall, once decorated with costly rugs and gold lamps but ransacked over a century ago, is the circular tomb chamber of Sheikh Safi himself, constructed in 1334 and extensively repaired (on the outside) in 1949. Before you leave the courtyard outside, don’t forget to walk round to see the exteriors of these tomb chambers with their tile decoration.