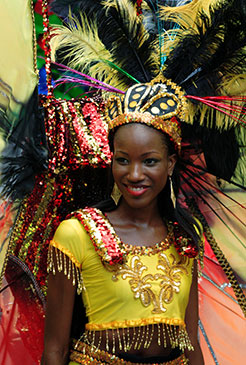 The French and Creole term for Carnival is masquerade and it is from this word that mas is derived, an abbreviated form which is used by Dominicans to describe the period of carnival (you may come across the term ‘Mas Domnik’). This two-day festival before Lent combines costume, music and dance with origins in west Africa and French Creole. Following emancipation in 1838 the festivities of mas moved to the streets of the capital, where bands from villages all around the island would come to celebrate. Each band had its own distinct style of music, dance and costume. One such costume is the sensay, which is a full dress of long strips of material with a headpiece that may include horns and a mask. The mask is of tribal origin and many demonic variations exist. The costumes of these groups, called ban mauvais, were deliberately intimidating, threatening terror with whips, sticks and batons. Today one of Dominica’s best-known ban mauvais groups hails from the village of Colihaut.

During the Carnival season there is always a ban mauvais parade accompanied by the drums of a la peau cabwit (goatskin drum) band through the streets of Roseau, and sometimes also in Colihaut itself. It is always atmospheric and stirring as the sensay dance their way through the streets accompanied by a cacophony of drums, horns and whistles. If you are visiting Dominica during Carnival, be sure to experience the ban mauvais and la peau cabwit parade at jouvert in Roseau, from around 04.00 on Carnival Monday.