Marine turtles are some of the most important species on the islands. Cape Verde is an important feeding area for five species. Recent research has shown that Cape Verde is a crucial participant in the life of the loggerhead turtle (Caretta caretta), the population being the third largest in the world after the Florida Keys in the United States and Oman’s Massirah Island. In the Atlantic, it is the second largest. One estimate states that about 3,000 breed annually in Cape Verde, though the figure varies enormously from year to year. The favoured island is overwhelmingly Boavista, probably followed by Maio, then Sal and all the other islands. 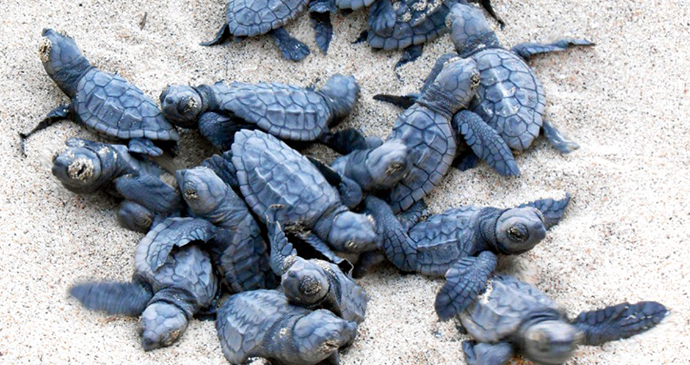 What are the threats to turtles?

Turtles face two threats. The first is hunting. This dates back possibly as far as 1479, when the French explorer Eustache de la Fosse reported that leprosy was treated locally with a diet of turtle meat and by rubbing the affected areas with turtle blood. King Louis XI, who believed he was suffering from leprosy, dispatched his representative to the Cape Verde Islands to investigate after learning of the cure.

The threat to habitat is also increasing as land is used for tourism development and sand is removed illegally for building. A report on the effects of tourism on turtles can be downloaded from the Sociedade Caboverdiana de Zoologia website.

A report by the secretariat for the Convention on Migratory Species called for urgent attention to conserve West Africa’s sea turtles. Klaus Toepfer, Executive Director of UNEP, said: ‘In the western Atlantic and Pacific oceans, populations of sea turtles have been falling dramatically in recent years. This makes [recent] findings in western Africa doubly significant, given its now undoubted status as a globally important region for sea turtle species.’

A national turtle plan was drawn up in 2008 and has now finally been approved. It is hoped that it will be properly funded and implemented. There are active turtle campaigns on several of the islands, notably Sal and Boavista, as well as projects run by communities or city halls on all the other islands. In 2009, a coalition of organisations, called TAOLA, Cape Verde Marine Turtle Network, was formed to synchronise activities and has had some success raising awareness and lobbying parliament. 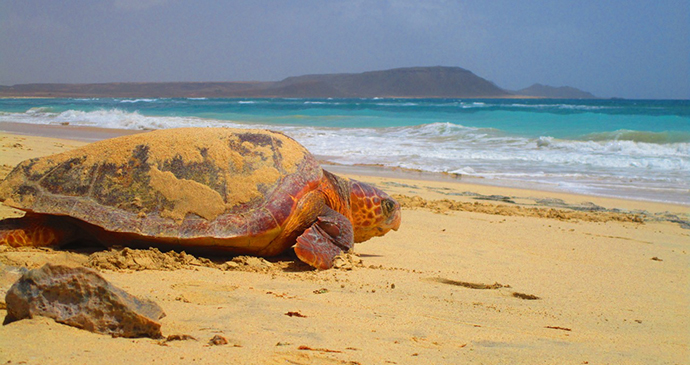 A turtle on the beach at Sal © Project Biodiversity

The common refrain has been that turtles are doomed on Sal. If the locals didn’t get them for supper, the quad bikes would crush their nests; and if the bikes didn’t get them, hotel and apartment lights would lure them into a deathly inland wander.

But there is hope, as long as Project Biodiversity, who recently took over from predecessor, SOS Tartarugas, can persevere in their conservation work. In nesting season, a team of employees and a committed body of international volunteers and visitors patrol some of the beaches of the island, warding off the activities of would-be hunters. Sadly, their resources do not allow them to cover all of Sal’s beaches, and the northern sands are unprotected. A field camp operates on Kite Beach on the east coast, allowing the project’s night patrols a base; in the neighbouring bar, a sobering sign records that 202 dead turtles had been found in the year to October 2016. As well as the hunters, beach hotel developments on Sal result in a loss of habitat and a huge decrease in turtle nests on beaches where construction work takes place. When hotels are complete, the beaches are awash with people, dogs and light pollution.

There are laws already in existence for the protection of turtles: it’s just the implementation/enforcement that’s missing. The willingness is there; shoestring resources have been cobbled together, and the efforts of the project are full-on. Turtles are also entering the tourist itinerary with the launch of afternoon hatchery visits to see the hatchlings which have been born from relocated eggs. As well as operating the hatchery on the beach in front of the RIU Palace Hotel, the Project Biodiversity team campaigns and champions the cause of the turtle at local government level. Their initiatives are doing good work to combat the lack of awareness amongst locals and visitors. Problems raised by proposed new developments are probably the most intractable, with almost every bit of land on the west coast earmarked for development. Turtles versus development: the battle is joined.

Visitors can support the project by visiting the hatchery (August–December), where you will learn more about conservation, adopt a turtle and donate if you wish. You can also ask in advance about volunteering opportunities, including taking part in night patrols.