Santiago has some very atmospheric barrios or neighbourhoods, mostly areas that became run-down when the middle classes moved to the eastern suburbs and were then rediscovered by students and artists, before becoming desirable again.

For most visitors, northern Santiago, across the Mapocho River, is synonymous with the Barrio Bellavista, a bohemian area taken over in the last couple of decades by trendy restaurants and bars; however, there is more to see and it’s worth visiting in daytime too. This was an area of farms and market gardens known as La Chimba, and only really began to be built up in the 1920s. Pío Nono (meaning Pope Pius IX) is the main drag of the nightlife scene, as well as sidewalk craft sales at weekends. The liveliest and most creative restaurants in town are here; it’s an ever-changing scene and many restaurants may have closed and been re-invented by the time you read this. There are better and more established places on the parallel streets, Ernesto Pinto Lagarrigue to the west and Constitución to the east. The hottest clubs are in Bellavista, the only area where it’s possible to move easily from place to place, and where you’ll find the only gay clubs, as well as most of the best salsotecas. 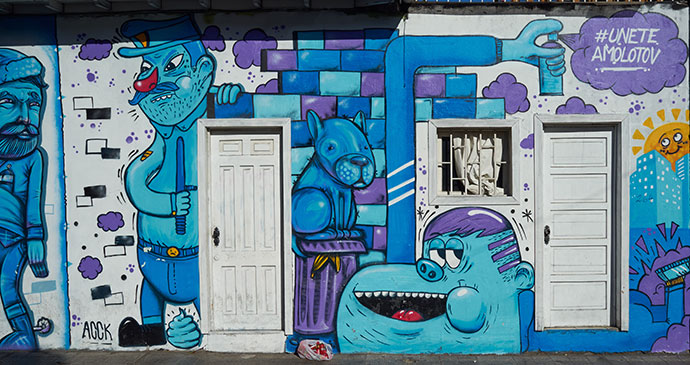 The heart of Barrio Brasil, just west of the historic centre, is the attractive Plaza Brasil, with fine specimens of native trees. The barrio was developed in the 1920s and was fairly affluent until the middle classes moved to the barrios altos and then the Via Norte-Sur severed it from the centre of the city. In the last two decades various private universities have moved into the area, refurbishing buildings and bringing money and youthful vigour to the area; the Metro and a new footbridge across the Via Norte-Sur at Huérfanos have also linked the barrio to the centre again. The plaza is ringed by cafés, as well as the Galpón Victor Jara, a venue for young musicians and political activists. Just west of the plaza on Compañía, the Templo de la Preciosa Sangre is a big salmon and cream basilica with palms in front and is rather more attractive than the better-known Basilica del Salvador, at Huérfanos 1781 (esquina Almirante Barroso).

This small area just across the Alameda from the historic core is somewhat reminiscent of the Latin Quarter of Paris. Consisting of just two cobbled streets, Calle Londres and Calle París, it was developed in the 1920s in the former orchard of the San Francisco monastery. Many of the buildings have been refurbished and some now house characterful budget hotels.