Each and every street name in Reykjavík’s city centre tells a story of its own. Here’s some context to go with your wandering:

(Main Street) The name says it all, except that this is the oldest street in the city with the oldest house (No 10), first built in 1762.

(East Street) Leads eastward past Austurvöllur (East Field) from Aðalstræti. The hollow square where the two streets intersect is popular with teenage skateboarders because in Iceland, skateboarding is not a crime. The next-door ice-cream shop is also one of the city’s most popular.

(Bank Street) Iceland’s national bank (Landsbanki) took up its offices here in 1886 and re-purposed the entire street. An atmosphere of money continues with a number of banks and ATMs, and a variety of high-end clubs, pubs, and restaurants.

(Free Church Way) The construction of Iceland’s Free Church in 1902 finally gave a name to the path along the west side of the Tjörnin. See the National Gallery of Iceland, Fríkirkjan, and the youth sports centre (built in 1908) decorated with Adonis statues and the ‘pavilion park’ Hljómskalagardurinn.

(Harbour Street) Back in the 18th century, this path marked the city’s waterfront. The street took shape with the long row of shipping warehouses that went up along one side and piers that extended from the dock on the other. The dock area was eventually filled in to the breakwater, which became Tryggvagata (Secure Street). 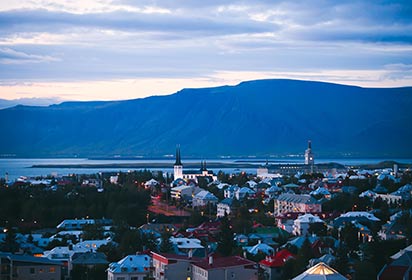 (Ring Road) Reykjavík’s ring road alters the original concept, but it still allows you the most direct access in and out of the city when driving a car. Hringbraut becomes Miklabraut (Great Road).

(Ingólfur’s Street) Named after Ingólfur Arnason, the man who picked the spot on which Reykjavík was built about 1,000 years before the street was here. See his fierce statue atop Arnarhóll.

(Church Street) A public Christian church has stood on this spot since AD1200. Before that, there was a church closer to the original settlement at the intersection with Aðalstræti. The most recent version is Iceland’s national cathedral, Dómkirkjan, across from the Althing.

(Brook Street) The small brook that trickled down from the Tjörnin into the harbour was the de facto sewage outlet for the city centre until the early 20th century. For sanitary reasons, the stream was completely covered, which explains the great width of Lækjargata today.

(Bath Way) The road still leads from the old city centre all the way to Laugardalur (Bath Valley), where the natural thermal pools are still put to good use. As Reykjavík’s main drag, visitors can’t help wandering up and down this street more than any other because of the prime window shopping, restaurants, clubs and bars. It’s the place to see and be seen. 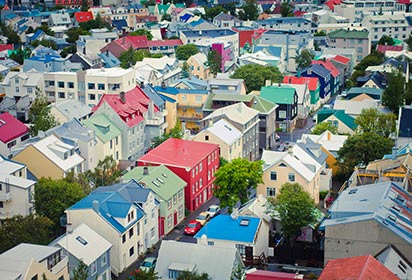 (School Cairn Path) Reykjavík’s straightest street ascends the hill where, in 1790, boys from the Hólavallaskóli school built a tall pile of stones to mark the road into Reykjavík. The cairn was twice rebuilt (1834 and 1868) but was finally removed in 1930 to allow for the Leifur Eiríksson statue.

(Pond Street) Forms the west side of the Tjörnin waterfront and one of the prettiest walkways in the city. Home to some of the city’s older and more traditional homes, several of which are ambassadorial residences; you can also get a glimpse of the water through tallish trees (a rare sight in Iceland).

(West Street) Leads west from the city centre into Vesturbær (West Town), one of the city’s oldest neighbourhoods and longest streets.

(Hope Street) Like much of Reykjavík’s waterfront, the northern edge of the Tjörnin is built from landfill. Although construction began in 1899, it took seven years to complete due to the sinking mud that caused periodic collapse. By the time the little street finally opened in 1906, the area had become synonymous with wishful thinking.