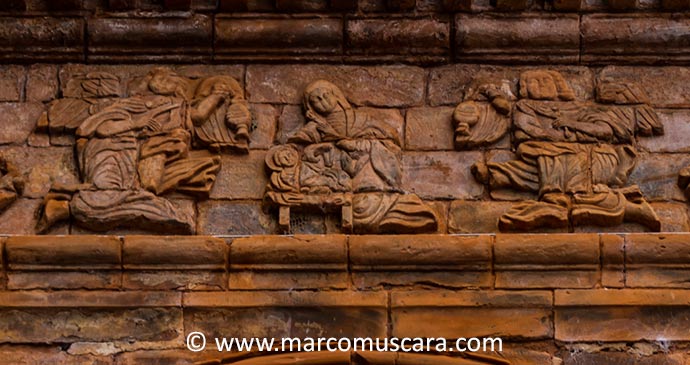 The Jesuit-Guaraní Reductions (and to a lesser extent the Franciscan Reductions) were centred around a square – the plaza – which at times was very large indeed (such as in Trinidad). On three sides of the plaza were casas de indios, which were rows of single-storey buildings with a colonnade all around or at least on the two long sides. Each building would comprise eight or ten square rooms, with doors opening to front and back, and each room would be the home for a family. The houses consequently had more doors than windows: in some places there were windows as well as doors, and in other places not.

In the old Guaraní huts, the buildings would also be long like this, but with the difference that all the families would live together; the Jesuits separated the families, in order to protect fidelity in marriage. Another difference was that the houses in the Reductions used improved building skills, passing from wood and straw, to adobe and tile, to brick, and eventually in some places to stone.

The Jesuit-Guaraní Reductions (and to a lesser extent the Franciscan Reductions) were centred around a square – the plaza – which at times was very large indeed (such as in Trinidad).

On one side of the plaza was the church, which was the most prominent building in the pueblo (town), and at times quite magnificently adorned. The bell tower was a separate wooden construction to one side or the other of the church (right up until the last Reductions, when it became an integrated part of a stone church as in Europe). On one side of the church there was customarily the cemetery, and behind that was the orchard, while on the other side was a group of buildings sometimes collectively referred to as the colegio, although they would include not only the school but also the priests’ residence, rooms for guests, offices and a range of workshops.

This colegio would be arranged around a couple of patios, with the Jesuits’ house adjoining the church. The most able boys studied in the school. Mostly, but not exclusively, they were the sons of the caciques, and, inevitably for the era, boys only. They were taught to read and write in Latin, Guaraní and possibly Spanish: Spanish was not used within the Reductions, but Latin was, in church. They also studied mathematics and music.

The most able boys studied in the school. Mostly, but not exclusively, they were the sons of the caciques, and, inevitably for the era, boys only.

The workshops of a Reduction could cover a wide variety of crafts: stone work and carpentry; carving – especially statues of saints – in stone and wood; painting – to decorate the church and colour the statues; weaving and making clothes; pottery, silverwork and goldwork, and ironwork – both for forging wrought-iron railings and gates, and for making firearms. The Guaraní needed guns to use in self-defence against the bandeirantes who from the beginning attacked and burned down the Reductions, capturing or killing the indigenous population.

Out of more than 70 Reductions that were founded for the Guaraní, more than 40 were destroyed by these slave-traders coming from São Paulo in present-day Brazil. Close to the two patios of the college, but without a fixed, regular spot for every Reduction, was the kotý guasú (Guaraní ‘room big’) for orphans, widows and other women who needed extra help and protection. There was often a small Loreto chapel somewhere in the Reduction, and a Calvary hill, but these did not have set locations.

Learn more about the Reductions in our comprehensive guide: