Rafflesias, orchids, pitcher plants and other unusual blooms have come to symbolise the extraordinary beauty of Borneo’s forests and the botanical wonders that exist in them. Some feature on the endangered species list, but one hopes the awe and attention they attract as ‘power flowers’ will help to save them. 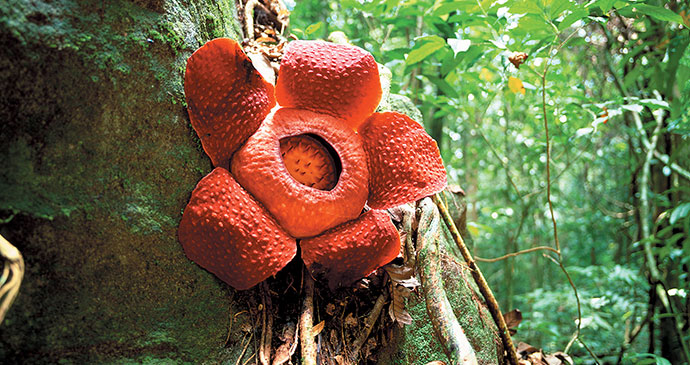 The blooming rafflesia emits the smell of rotting flesh © Sarawaktourism

With its cabbage-shaped, riotous ruby-coloured blooms, the rafflesia isn’t just an icon in Malaysian Borneo; it’s an obsession. Also known as the ‘corpse flower’ for the rotting-flesh smell it emits when in bloom, the foul odour of this lowland rainforest and hill forest species has done little to dampen its popularity. Indeed, challenging smells in the botanical world (durian fruits are just as malodorous) seem to heighten interest. In 1928, Swedish entomologist Eric Georg Mjöberg described the smell as ‘a penetrating odour more repulsive than any buffalo carcass in an advanced stage of decomposition’. The carcass smell attracts carrion flies in what has been described as ‘pollination by deception’. Far from being a carnivore, the rafflesia is a parasitic plant that embeds and spreads its roots among Tetrastigma vines. The largest species in the rafflesia family is Rafflesia arnoldii (also known as the corpse lily in the US), which can produce flowers up to 90cm wide and 7kg in weight – it is the largest known flower on the planet.

The first European to report it was surgeon and lay-naturalist Joseph Arnold, after an expedition to the depths of Sumatra in 1818 with Sir Stamford Raffles. ‘To tell you the truth, had I been alone with no witnesses I should have been fearful of mentioning the dimensions of this flower,’ wrote Arnold. Long admired by indigenous people, they reportedly use the flowers for labour pains and postnatal fatigue, and as an aphrodisiac and fertility charm. Anglicised in Raffles’s honour, the Rafflesiaceae family consists of 17 species, five of which are found in Malaysian Borneo: R. keithii and R. tengku-adlinii are found only in Sabah, while R. arnoldii, R. pricei and R. tuan-mudae can be seen in both Sabah and Sarawak. Rafflesia strongholds include Sabah’s Crocker Range, Gunung Kinabalu National Park and Maliau Basin, and Sarawak’s Gunung Gading National Park. Known collectively as Bunga pakma, they generally grow in hill rainforest but also lower montane forests at elevations of 400–1,300m.

The rafflesia bud – a darkish-brown lump the size of a large grapefruit – lies on the host vine for around nine months as it slowly swells in size. Upon its sudden opening, the giant flower heads have no leaves and virtually no stem, but five mammoth petals. Blossoming occurs over several days – during this time national parks and wildlife and tourism offices issue alerts, prompting a mad rush to see the flowers. Rafflesia are at their most beautiful during their first day or two of blossoming. After that they become covered in brown blemishes, and their flesh darkens and rots to reveal a 15cm-wide fruit full of thousands of tiny, hard-coated seeds. It still isn’t known whether elephants, ants, squirrels or other animals disperse the seeds – a theory hypothesised by Arnold – or why the flowers are so large.

The need for protection of the rare rafflesia is high; the flowers are threatened by spreading urbanisation, trampling by animals and people, and damage caused by egg-laying wasps. As many as nine out of every ten buds never open, shrivelling and dying for inexplicable reasons.

Rafflesia have no specific breeding season – they can appear at any time, though blooms tend to be slightly more frequent between November and January. A number of hotlines exist for checking on rafflesia status. Check with national park or tourism offices in the area you are travelling, though you may be as likely to smell the blooms before you hear about them!

Few plants capture the imagination more than the Hitchcock-ian carnivorous pitcher plants (genus: Nepenthes). These jug-shaped, open-mouthed pitchers are modified petioles (stalks) that grow along herbaceous vines and excel at luring, trapping and devouring insects and small animals. The insects are attracted to the anthocyanin pigments (the colourful cups are often flushed with maroon and pink) or lures of nectar around the rim. When they venture inside the trap, they slip on the mucus-lined walls and fall into the pool of liquid at the bottom, where they are dissolved by bacteria or enzymes secreted by the plant. Because the meat-eating plants derive their nutrients in this unlikely manner, they can survive in very poor soil.

Of the 30 species of Nepenthes found in Borneo, around half occur in Malaysian territory. The huge Nepenthes rajah is the largest of the genus, found only in Gunung Kinabalu National Park and near Gunung Tambuyukon. The largest-ever pitcher recorded contained a staggering four litres of liquid and a half-digested rat! Other species are endemic to the upper reaches of Mount Kinabalu, including N. burbidgeae, N. villosa and N. edwarsiana. Also known as ‘monkey cups’, the pitchers are used by some tribes to cook rice or carry water.

Prime pitcher-plant locations include the Gunung Kinabalu National Park and Maliau Basin in Sabah, and Bako, Gunung Mulu and Lampir Hill national parks in Sarawak. They are far less elusive than Rafflesia, though you have to climb to see them – most occur at 1,500–2,600m. Tham Yau Kong runs one-day to two-week Nepenthes-spotting tours in Sabah.

Exquisitely delicate and intensely colourful, Borneo is said to house around one-tenth of the world’s orchid species: that’s 2,500 out of a documented 25,000 types in the Orchidaceae family. About 1,200 of these (including several endemic species) grow in Gunung Kinabalu National Park. The Rothschild’s slipper (Paphiopedilum rothschildianum) exists only on Mount Kinabalu and is so rare that its specific location was kept secret for many years because of repeated attempts of smuggling. Now protected by law, its close relatives include four other ‘slipper orchid’ species, one of which – P. dayanum – is also classed as endangered.

Other orchid treasures, says Dr Jamili Nais, Director of Sabah Parks, include ‘an amazing gigantic elephant-ear orchid (Phalaneopsis gigantean); peculiar species like the snake orchid (Paraphalaneopsis labukensis), which has rounded, cylindrical leaves looking like a snake; and the giant or tiger orchid (Grammatophyllum speciosum)’. About 120 Bornean orchids are on the IUCN’s Red List – at least 70 of which are listed as critically endangered.

Adding resplendent colour to rainforest and mountain environments, Borneo’s 50 or so species of rhododendron range from ground-hugging shrubs to hanging epiphytes, with pink and red tubular flowers. Around 30 are found in Sabah, including 12 endemic species. Gunung Kinabalu National Park is a good place to see them. 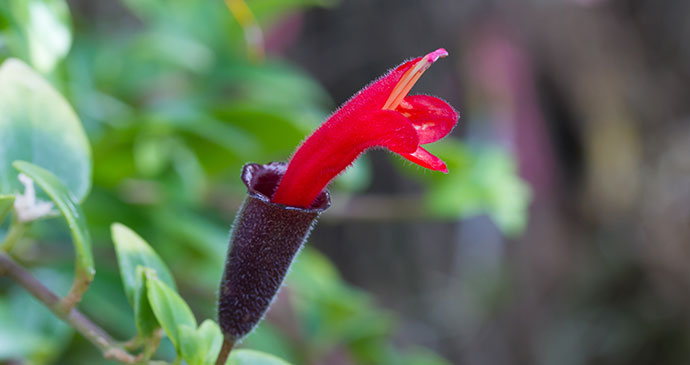 Various species of extravagant, multi-coloured ‘lipstick flowers’ (genus: Aeschynanthus; family: Gesneriaceae) are found in both Sabah and Sarawak. These Old-World epiphytes flourish in temperate, montane forest environments such as Mount Kinabalu. According to Anthony Lamb, British botanist and author of The Lipstick Flowers of Sabah and The Lipstick Flowers of Sabah and Sarawak (Singapore Botanic Gardens, 2003/2005), the name was originally applied to Aeschynanthus pulcher from Java, because the flower buds emerging from the cylindrical calyx tube look like ladies’ lipsticks. Former director of Sabah’s Agricultural Park, Lamb has catalogued some of the most rare and unusual species including A. magnificus, A. speciosus, A. tricolour and A. siphananthus. Of the 25 types in Sabah, ten inhabit Mount Kinabalu.