Despite the rigours of the Inquisition, one of the Catholic Church’s great strengths has been its ability to assimilate the sacred traditions of other faiths into its own, especially where the Jesuits and the Benedictines dominated. In Latin America the Maya of San Juan Chetumal use Christ and the saints as new symbols for ancient connections, and the saints of the Afro-Brazilians of Bahia and Pernambuco double up as Candomblé divinities or orixas. Many Catholics on the left wing of the church have long striven to protect this ability of the Church to preserve rather than destroy – an ability whose ultimate fruit was enunciated as Nostra Aetate and Lumen Gentium in the doctrinal documents of Vatican II.

This process of assimilation is an ancient one. It began with St Paul’s invitation to the gentiles to enter the temple even though they were not circumcised. And its history can be traced from the Middle East into Europe. In Portugal it is most concretely seen in the Alentejo, where prehistoric sacred dolmens have been incorporated into chapels and churches. 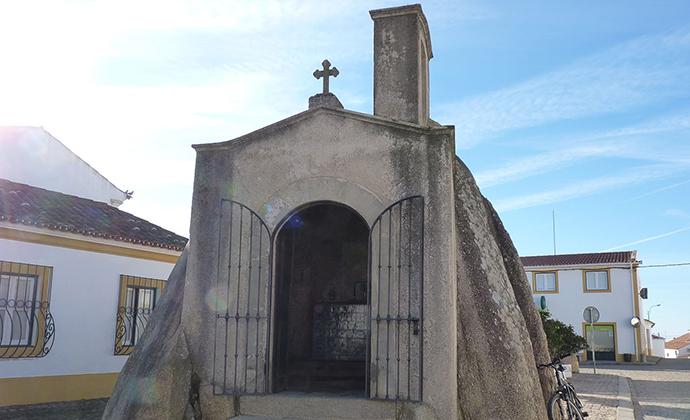 The Anta de Pavia in Mora is the most famous of the dolmen churches © Duca696, Wikimedia Commons

The most famous of these is the Anta de Pavia in Mora – a tiny town 50km north of Évora. This 4m-high stone burial chamber sits in the town’s central praça, capped with a tiny belltower, fronted with a Romanesque doorway and with a shrine to St Denis inside. Most visitors don’t even notice it’s there. There’s a similar chapel at São Brissos in Montemor-o-Novo.

When Christianity came to Portugal with the Romans, this was a profoundly pagan country. And in its rural areas it remained so – at least formally – through the Gothic invasions, the Moorish conquest and even the Inquisition. Like the Irish, the old Portuguese were people deeply connected to the land and the seasons. They worshipped the spirits of trees and springs, and as Christianity became dominant, especially after the Reconquest, these traditions were transformed, even as their substance remained the same. Feminine spirits of springs or grottoes often became associated with the Virgin Mary and old places where the sacred imbued the Earth became new holy sites where the Madonna appeared to local people. Most were ignored by all but the locals – tolerated or ignored by priests, assimilated into daily Catholic life. One was championed by the Catholic Church’s ecclesiastical hierarchy – at Fátima.

Nowadays most of these sacred sites are forgotten, consigned by modernity to old stories, separated from the land or any experience of being alone with it, under a full moon or canopy of stars free of artifi cial light. The sites are remembered only in legends of werewolves and witches associated with the hills around Arronches, or the duende of the woods.

But in the hills of São Mamede and the Vale do Guadiana, there are still silent places, and in the smaller towns and villages of the Alentejo you can find seers and bonesetters, and locals who pray to the Madonna of a spring or rocks. The dolmen churches of the Alentejo serve as a physical reminder of the ancient traditions these few unwittingly preserve.

If you want to find out more about the history of Alentejo, check out our new guide: