Taken from Brian Jackman’s and Jonathan and Angela Scott’s The Marsh Lions, this excerpt illustrates the power-play between prides and nomads. Pride leader Old Man takes on nomad Brando to save the life of his pride, but with devastating consequences.

Old Man lay resting under a fig tree at the edge of the Marsh. During the night he had returned to the giraffe his pride had killed, only to find it surrounded by hyenas. Sensing the hopelessness of the situation, he retreated and left the forest at daybreak, crossing the murram track that led to the Governor’s Camp airstrip, and disappearing around the eastern fringes of the Marsh. Had he been hungrier, had he been younger, had there been fewer hyenas, he might have tried to chase them away from the dead giraffe.

They are the hunch-backed gangsters of the high plains country, and Old Man respected them, perhaps because in their hideous shambling shapes as they whooped and fought among themselves over their stolen kills, he dimly sensed the shadows of his own end.

But he knew the ways of the bear-faced scavengers, knew the strength of their jaws, which could crunch through a zebra’s femur as if it were matchwood. Despised as cowardly carrion-eaters, hyenas are also ruthless predators that can butcher a wildebeest as efficiently as any pride of lions. What they lack in speed they make up for in stamina and determination. Where lions or cheetahs may give up after a short chase, the hyenas will lope relentlessly after their prey until they wear it down. They are killers that live and hunt in close-knit clans. They are the hunch-backed gangsters of the high plains country, and Old Man respected them, perhaps because in their hideous shambling shapes as they whooped and fought among themselves over their stolen kills, he dimly sensed the shadows of his own end. 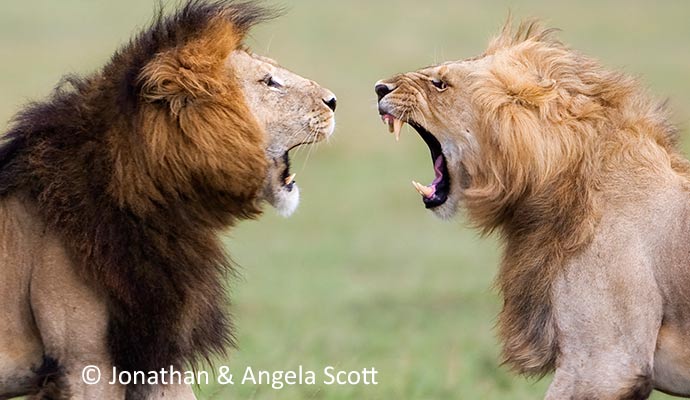 So the old lion had left the kill, walking slowly through the sunlight of the open plains until he came to the Marsh. Knob-billed ducks and Egyptian geese rose up with anxious voices as he sniffed among the tasselled reeds, searching for a place to drink. Afterwards he left the Marsh and sought the shade of the fig tree where he remained, eyes closed in half sleep, far into the afternoon.

He lay alone. His pride had moved back into the woods of Kampi ya Chui, but this did not worry him. When he was hungry again he would hear them hunting. He would hear the sound of killing and would see them out to claim his rightful share as a pride male. For some time now, Old Man had been aware of the presence of the nomads, Scar and Brando. Every night and again at dawn he heard them roaring, and answered them with his deeper challenge. Twice while trailing his hunting lionesses, he had come across the tracks of the trespassing males, but had not pursued them. Without the support and companionship of Dark Mane, he had become nervous and unsure of himself. Confrontation was now only a matter of time. When it came, he would have to fight for his pride, and maybe his life.

When at last he awoke, the fig tree was throwing long shadows across the grass. He rose and stretched, arching his back in a vain attempt to ease the dull ache of advancing age.

When at last he awoke, the fig tree was throwing long shadows across the grass. He rose and stretched, arching his back in a vain attempt to ease the dull ache of advancing age. He felt heavy with sleep. Old wounds nagged at his haunches, and he carried his shaggy head low, as if bowed down by the weight of years. But as he walked out into the plains he was still a majestic beast, and there was now a sense of purpose in his stride.

When Old Man strode over the horizon, Brando was drinking from a muddy pool a few hundred yards from the spot where he and Young Girl had killed the topi. The two males saw each other at the same moment. Young Girl, who lay off to one side in the thickets of the lugga, saw Brando’s body stiffen and followed his gaze to the grassy rise where Old Man had paused for a moment, outlined against the sky as he stood sniffing the air. The lioness remained crouching in the thickets, motionless except for an involuntary twitch of her tail, but Brando leapt to his feet as Old Man roared and came trotting towards him. The nomad was confused. Inexperience held him transfixed, unable to decide whether to fight or flee. Too late he whirled and began to run; but no sooner had he turned than he felt Old Man’s claws hook into his flank.

Over and over they whirled, their movements almost too swift to follow as they ripped and grappled and snarled, seeking the bite that would end the battle. Very quickly the older lion’s experience began to tell. He feinted, rolled and bit savagely into Brando’s shoulder. Brando felt the fangs sink deep. He sensed the strength going from him, but managed to shake free and lashed out in desperation at Old Man. In his prime not so long ago the veteran might have dodged the blow, but now his reflexes were slower, and he caught the full force of Brando’s claws on the left side of his face.

Young Girl, still hidden in the undergrowth, heard Old Man’s roar of pain, saw the two fighting males break apart, with Brando streaming blood from deep wounds in his shoulder and Old Man shaking a head made terrible by the gash which had all but gouged out an eye. Before Brando could regain his breath and return to the attack, Old Man’s fighting spirit had broken. Maddened by the pain of his mutilated face, he turned and fled. His days as a pride male on Miti Mbili Plain were over. Now all he could think of was escape. Over Leopard Lugga he went, dripping blood as he ran. He skirted the northern end of the Marsh and did not stop until he reached the Mara River.