The native cultures of Alaska, while no longer the majority, remain diverse and vibrant, with many groups experiencing a cultural revival amongst younger generations. The Alaska Native Claims Settlement Act of 1971 gave native groups 10% of the state and about US$1 billion, which had the affect of catapulting them into the modern age with internet, TV, westernised diets and snowmobiles. Still, many native groups maintain a traditional lifestyle through subsistence hunting and gathering, and by keeping dance, art and language traditions alive.

The Tsimshian, Haida, Tlingit and Eyak

The lush rainforests of southeast Alaska are home to the Tlingit, Haida, Tshimshian natives. When early Athabascans populated the interior of Alaska and Canada after the last ice age, some tribes split away and made their way to the sea where they established themselves along the coast. With an abundance of food and raw materials, these groups thrived, developing vibrant cultures that are still active today. 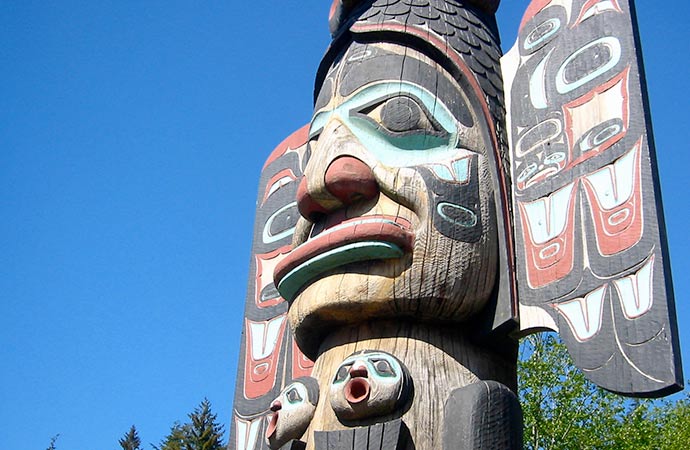 Interior Alaska and Canada has traditionally been populated by the Athabascans whose language is closely related to the Navajo of the American southwest. They carved out an existence in a harsh climate of extremely cold winters and blistering hot summers by harvesting salmon from rivers and hunting large game such as moose and caribou. The Athabascans traded extensively with coastal groups and their trails to the coast were later used by gold prospectors. The group consisted of at least 13 distinct tribes, each with its own language and customs.

Northwestern and Arctic Alaska were settled by the Inupiat (or Inupiaq), sometimes called the Inuit. Their current population is about 16,000 with another 30,000 in Canada and 47,000 in Greenland. The southern part of western Alaska was inhabited by the Yup’ik and Cup’ik who currently number about 25,000 with another 1,400 in Siberia. These groups, while distinct in many ways, all lived off the sea, hunting marine mammals such as whales, walrus, seals and fish from kayaks or umiaks.

To the south were the Unangan, or Aleut people of the Aleutian Islands and Alaska Peninsula. They were masters of the rough seas around the Aleutian Islands, paddling seal-skin kayaks, or baidarkas, through all kinds of weather to hunt marine mammals. In addition to being master kayak builders and paddlers, they were expert weavers, able to weave beach-grass baskets so tight they could hold water.

The Aluttiq people traditionally lived in Kodiak, the base of the Alaska Peninsula and Prince William Sound. Their culture shares many traits with the Unangan, but is distinct in its language and customs. The Aluttiq Museum in Kodiak has spearheaded an ambitious programme to document the language and help teach it to younger generations. The Aluttiq refer to themselves as Sugpiat, which translates as ‘real people’.