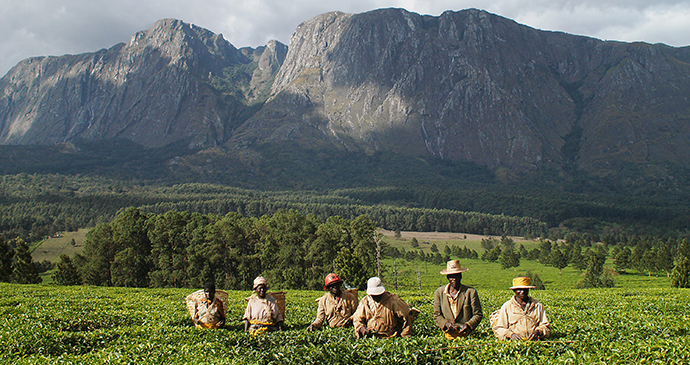 No other geographic landmark in Malawi is quite so shrouded in myth and legend as Mulanje, unsurprisingly perhaps when you consider the extent to which its forbidding silhouette dominates the skyline for miles around. Several legends pertaining to the mountain might be grounded in fact, among them persistent whisperings that it still harbours a secretive population of ‘little people’, possibly Batwa hunter-gatherers, who act as its spiritual protectors. Of course, this is highly unlikely, taken in the most literal sense, but it does seem likely that the upper slopes of Mulanje formed the last Malawian refuge to the Batwa, recently enough that they live on in the folk memory as spirits.

Several other spirits are associated with the mountain. One such entity is Napolo, a serpentine creature who reputedly moves between Mulanje and Mchese, generating the misty chiperone conditions that frequently enclose the upper slopes. Napolo is also blamed for thunderstorms and other destructive weather conditions, and some believe he induced the tragic flash flood that claimed so many lives at Phalombe in March 1991. Other legends describe a humanlike one-eyed, one-legged, one-armed creature that floats slowly in the air, waiting to lure anybody who looks at it up the mountain to disappear forever.

Local beliefs about Mulanje are reflected in the Chichewa name of its highest peak. Sapitwa is variously said to be derived from the phrases ‘musapite’ and ‘sapitidwa’, which respectively translate as ‘do not go there’ and ‘the place you cannot reach’ – the first suggesting that the peak is considered to be out of bounds for spiritual reasons, the second simply that it is difficult to reach. To an extent, both interpretations are true, and either way, anybody planning to climb Sapitwa would be wise to treat it with respect – at least two tourists have died while attempting a solo summit in the past decade.

A more recent legend pertaining to Mulanje is that Tolkien climbed it shortly before he wrote The Hobbit and based several aspects of the book on the trip, going so far as to name the homeland of its protagonists after the nearby Shire River. So far as we can ascertain, Tolkien did indeed visit Malawi at some point, but not Mulanje itself, and aside from the Shire coincidence, it seems more likely that the Hogsback Mountains in the Eastern Cape province of South Africa, which he visited as a child, inspired the landscapes described in the book.

In 2017, Mulanje mythology took on a distinctly sinister edge, with reports of bloodsuckers preying on local villagers. The rumours, believed to have emanated from Mozambique, were that human vampires were feeding on people as part of magic rituals to gain wealth. In the hysteria that grew up around these swirling stories, vigilante mobs attacked anyone accused of bloodsucking: eight people were killed in Mulanje, Phalombe and Blantyre. One literal interpretation of this story is that it grew from misunderstandings around medical testing for HIV/Aids, or that it was a way of targeting outsiders: one of the victims was albino, one epileptic and others were visiting from the Congo. As curfews were imposed and the UN withdrew staff , the area was gripped by these strange developments, which have thankfully now faded to add another layer to Mulanje legend.

Inspired to read more? Check out our guide to Malawi: