In this extract taken from his new book Wild About Britain, Brian Jackman writes about his favourite month, and its eponymous insects.

If I were an exile pining for England, May is the month I would miss the most.

The return of summer: cuckoos calling, hawthorn blossom bursting like Atlantic surf along the hedgerows and yellowhammers wheezing from the telephone wires in the long light evenings. 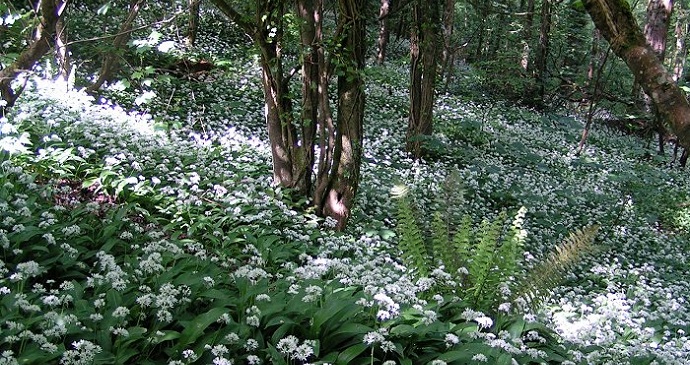 For Brian Jackman, ramsons are a sign that summer has returned to England © Sannse, Wikimedia Commons

At home the lanes are choked with cow parsley, lit by the lily-white bells of ramsons, by whose thick garlic breath I could recognise West Dorset with my eyes shut. The swifts are back from Africa, screaming over the rooftops and seeming none the worse for having spent the past nine months entirely on the wing.

With them has come another fast and dashing flier, itself not unlike a large swift. The hobby is a beautiful sickle-winged falcon, moustachioed like a Mexican bandit, with rust-red leg feathers and a taste for dragonflies that it grabs in the air and eats on the wing. It spends the winter deep in Tanzania, hunting over the Rufiji delta and the Maasai steppe; but in May it returns to breed in southern England, striking terror among our resident swallows and martin colonies whenever its rakish silhouette cuts through the sky.

Yet for all its élan and predatory glamour, the month belongs not to the piratical hobby but to an altogether more delicate creature with gossamer wings. For May is traditionally the month to witness the most spectacular uprising in the insect calendar. It happens with almost stopwatch precision and there is no better place to see it than from the banks of a Hampshire chalk stream.

The Test is such a river – possibly not the world’s finest trout stream, but undoubtedly the most famous. For anglers, every inch of its banks is hallowed ground. There are salmon in the lower reaches, but higher up the trout is king – both native brown and stocked rainbow.

Between the mares’ tails of water crowfoot, in the long swims where the water runs bright over clean gravel, the river is alive with their hovering shadows. And here, around the fifteenth of the month – certainly no later than the nineteenth – the season is marked by one of the last great natural phenomena of the English countryside, as the river’s surface shivers and dissolves beneath a mass of dancing mayflies. 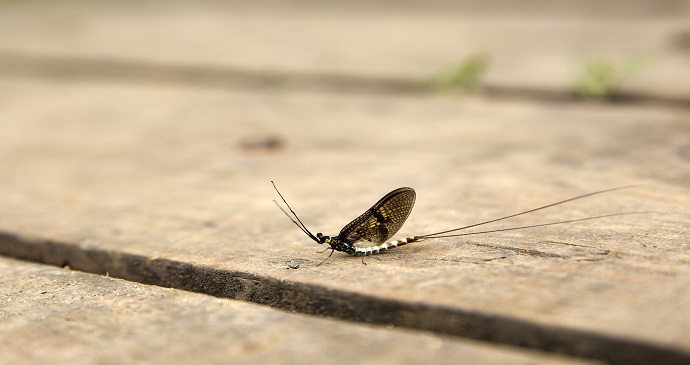 The mayfly is easily the largest of the Ephemeroptera order © Chris Moody, Shutterstock

The mayfly is easily the largest of the Ephemeroptera order – aquatic insects with delicate wings like leaded windows. From the head to the tip of its triple cat’s-whisker tail it measures close on two inches and, at rest, clinging to the underside of a leaf, its wings are pressed together like hands in prayer above the slender body.

The mayfly spends the first two years of its life as an underwater nymph, whiskered and unlovely, burrowing in the silt and breathing through gills on its back. But in May it crawls to the surface and undergoes a dramatic double metamorphosis, emerging first as a dun, or sub-imago with dull wings, and finally as the adult fly, glistening and complete, rising and falling over the water in the throes of its mating dance.

Often the dance begins with a mere sprinkling of flies; but sometimes, as when unfavourable weather holds back the hatch, the pent-up insects take to the air in dense cumulus clouds.

True to their scientific name, mayflies lead ephemeral lives. Two or three days at most and they are done. Once mated, the massed females return to the water to lay their eggs and die. To the waiting trout the spent flies must appear like snowflakes on a windowpane. Now begins a time of plenty – ‘duffer’s fortnight’ – when even the most inept angler can hook a trout as the fish rise and rise again to suck down the dead and dying insects with a faint but audible smack of the lips.

Even without the annual miracle of the mayflies, the Test is remarkable: for much of its modest length it is very private, its exclusive beats and fishing huts closed off by privilege, so that often it reveals itself as no more than a tantalising gleam far out in the water meadows or a receding perspective of bankside trees.

It is not a wild river like the Tay, or a rolling river like the Severn. It lacks the limestone crags of the Dove, the Wye’s wooded symmetry. The Test is a chalk stream, pure and simple, and, in May, when the waters begin to run gin-clear and its galleon reaches of great willows stand becalmed in a sea of buttercups, time and place come together to distil the essence of a southern English summer.

This is an active time for all river life. Other insects besides mayflies appear. Prominent among them are glossy black hawthorn flies with long trailing legs. Orange-tip butterflies search the meadows for lady’s smock, and metallic green demoiselle flies rest on the crowfoot’s floating tresses. Long before sunrise the banks are loud with the harsh song of reed warblers whose cup-shaped nests, slung between the tall Phragmites stems, will soon hold green-speckled eggs.

By early evening the river is like smoked glass. Rising trout dimple its surface, leaving a few bubbles to ride past on the swirling current. A cuckoo calls across the meadows. Warmth and windless air lull the senses. It is all so peaceful, inalienable and unchanging.

Yet even this sacred valley is no longer immune to the forces that have been reshaping so much of our countryside. Here as elsewhere, inch by aquatic inch the mayfly is losing ground. Outwardly the Test is as serene as ever, but under the surface something slow and insidious is at work.

Causes and theories abound: rising nitrate levels, insecticides washed from the fields, trout-farm slurry, dredging and drainage schemes that disturb the riverbed in which the mayfly nymphs live. All may take their toll. Mayflies need shade and shelter, and the remorseless defoliation of the farmed landscape – the removal of trees, hedges and bankside cover – may also be hastening their decline.

If the mayfly goes, how long will it be before the trout and the swifts and reed warblers follow? In the fight to maintain our clean rivers, the dance of the mayflies is a welcome sign that the battle is not yet lost.