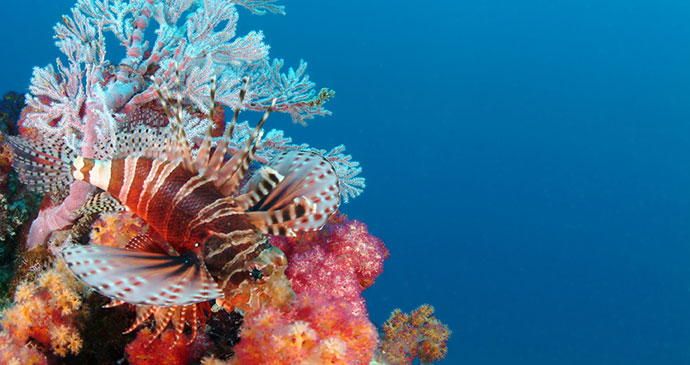 The Seychelles has designated some 140km² of its territory for conservation of marine ecosystems, and the country has the distinction of having established the first marine park in the western Indian Ocean. The Ste Anne Marine National Park, which was proclaimed in March 1973, is probably the best known and, because of its proximity to Mahé, is visited by boatloads of tourists. The park encompasses the islands of Ste Anne, Moyenne, Round, Long and Cerf, together with the adjacent reefs and sea, an area of 15km². The park offers a diversity of marine habitats including fringing coral reefs, patch reefs, coral-encrusted granite boulders, seagrass beds, sand flats, intertidal rocks and sandy beaches. Snorkelling is permitted and, if you don’t wish to get wet, tours by glass-bottom boat set out from the Marine Charter Association jetty in Victoria. Fishing by visitors is prohibited, as is collecting shells and coral.

The other marine protected areas managed by the Seychelles National Parks Authority include Curieuse, Baie Ternay, Port Launay, Silhouette Marine National Park and the area surrounding Ile Cocos. The Curieuse Marine National Park was established in 1979, and extends from the northeastern shores of Praslin across to, and around, Curieuse and Ile St Pierre. Baie Ternay and Port Launay, adjacent areas at the western extremity of Mahé, were also established as marine parks in 1979; these bays are characterised by fringing reefs which can be viewed by snorkelling or glass-bottom boat trips. Silhouette Marine National Park was designated in 1987 and comprises an area 1km wide around the perimeter of the island famous for its glacis that slope steeply into deep water.

Aldabra, a World Heritage Site, serves as a flagship marine protected area and is administered by the Seychelles Islands Foundation. Similarly, the marine areas around Cousin and Aride are protected through the respective efforts of Nature Seychelles and the Island Conservation Society. African Banks, through its allocation to the Ministry of Defence, also offers some protection to the marine life in the area.