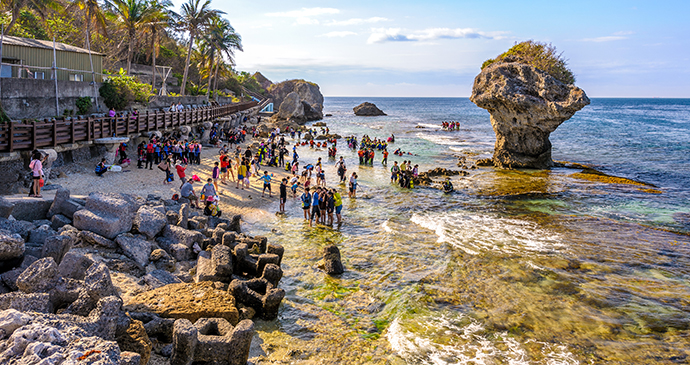 The island’s best-known and most-photographed coastal feature is a rock outcrop that’s shaped like a giant mushroom © Richie Chan, Shutterstock

Little Liuqiu is a jewel surrounded by clean seas.

Whether you arrive at Baisha 白沙 or the smaller settlement of Dafu 大福, your first thought is likely to be that Little Liuqiu isn’t very different from the rest of Taiwan. The town behind the ferry dock at Baisha is a dense collection of three-storey concrete boxes, and hundreds of tripod-shaped coastal fortifications have been piled up where the land meets the sea. Three temples are visible (Liuqiu has an amazing number of folk shrines considering its population, a mere 12,100), and the moment you step off the boat you’ll find yourself in a whirligig crowd of people and motorcycles.

Don’t let these initial impressions put you off. Fortunately, there’s no more to Baisha than what you see from the boat – and it’s the island’s biggest settlement. Little Liuqiu is a jewel surrounded by clean seas. The ‘little’ is to distinguish it from Japan’s Ryukyu Islands (now called Okinawa), the name of which was written using the same Chinese characters. The island is largely uplifted coral reef and thus unsuitable for farming, so you’ll see not a single rice field and very few vegetable gardens. Nonetheless, food and other necessities are no more expensive on the island than in Donggang or Kaohsiung, so there’s no need to haul lots of provisions with you.

The absence of industry and the tiny number of cars mean that the sounds of nature can be heard everywhere: waves, wind and birdsong. The vibe is unusually and genuinely relaxing. No wonder, then, that some expats head here rather than Kenting when they want a get-away-from-it-all weekend. Twenty kinds of coral and 300 fish species make Liuqiu a good place for snorkelling, and there’s also superb scuba diving but no infrastructure for divers who don’t speak Chinese.

English-language sources sometimes refer to the landmass as Lamay Island because its original inhabitants were the Lamayans, an Austronesian tribe. In 1621 and again in 1631, tribesmen massacred European shipwreck survivors. The VOC attacked the tribe in 1636. Most of those fighting on the Dutch side were recruits from other Taiwanese tribes that despised the Lamayans. The climax was a siege at what’s now called Black Ghost Cave, where more than 300 Lamayans were massacred and the survivors were sold into slavery. After that, Little Liuqiu had no permanent human population until the ancestors of the current islanders arrived from Fujian in the late 18th century.