In this extract taken from his new book Wild About Britain, Brian Jackman writes about his experience tracking geese on Islay in the Inner Hebrides.

Out of the cold Hebridean twilight falls a wild music. At first so faint I can hardly hear it; a distant chorus of high horns in the wind. Then louder, more insistent, drawing closer until this time there is no mistaking that exultant yelping clamour. It is the hounds of heaven in full cry: a thousand barnacle geese flying in to roost on the salt marsh of an Islay sea loch.

Of all the winter movements of wildlife that sweep across Britain, there is nothing to match the huge migrations of Arctic wildfowl that settle on our coasts and estuaries, and nowhere better to thrill to the sight and sound of wild geese in their tens of thousands than this most southerly of the Hebrides. 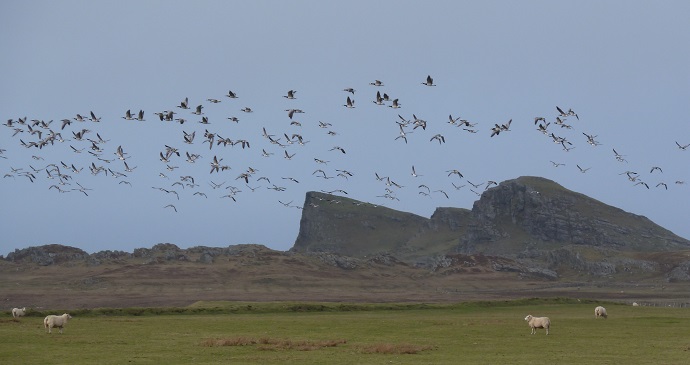 Islay is a wet and windy place. The west coast is exposed to the full force of the Atlantic. Only in the woods of Bridgend, where snowdrops lie in deep drifts beside the little River Sorn, is there shelter from the gales. But the sea brings blessings, too. Lagged by the North Atlantic Drift of the Gulf Stream, Islay is spared the worst of the winter. While the mainland shivers under snow, the island’s fields stay miraculously green.

Over the years, Islay’s mild winters and protection from shooting have led to an enormous build-up of migrating geese. They arrive in October from their breeding grounds on the Greenland tundra: twenty-two thousand barnacle geese and six thousand white-fronts, making this island of lonely bays and melancholy hills a winter refuge of international importance. Now, in these short February days, the birds must spend every waking moment feeding.

They dig for clover roots, strip seeds from sedges and nibble the salty merseland turf; but nowadays they much prefer the hard-won pastures of improved rye grass, plucking the tender shoots at the rate of ninety pecks a minute.

This is good for the geese but hard on the farmers, whose grasslands are clipped bare each winter. So great is the damage that the eight farmers whose fields are most seriously affected currently share fifty thousand pounds a year in compensation from the Nature Conservancy Council.

Sometimes, when the moon is full, the geese will even feed through the night; but most nights they roost on the sandflats of Loch Gruinart and Loch Indaal, congregating towards dusk to create a spectacle without equal in Britain.

Shivering in the sea wind, I watch them until it is too dark to see. They are such evocative birds. Long after the last stragglers have settled down, their gabbling voices still ring in my ears. There’s a wildness about them, and something more, a whiff of the Arctic that makes London seem a million miles away.

Next day, a wild-goose chase to see the birds on their feeding grounds at Loch Gruinart, where the RSPB owns a desolate tract of boggy fields. By February the barnacles have split up into smaller packs, but there are at least two thousand on the reserve this morning.

I sit and watch them from the roadside. The wind hisses in the rushes. A brown hare lollops past. The geese ignore it; but when a peregrine appears, all feeding stops. Up come the heads, black necks erect as two thousand pairs of beady eyes fix on the falcon. Then they are climbing, baying and yapping, heading for the fields behind Bruichladdich.

Above the sands of Loch Gruinart stands the lonely chapel of Kilnave. In 1598 a war party of MacLeans were smoked out and butchered here by the victorious MacDonalds in a bloody clan battle. Now all is peaceful. Sheep graze among the headstones and, in the fields running down to the loch, more geese are feeding. These are Greenland white-fronts – so-called because the orange bills of the adult birds are set off by a white mask. They feed more quietly than the bickering barnacles; but in flight their cry is infinitely more musical, an eager yodelling whose icy echoes prick the soul.

In 1985 the white-fronts were the subject of a major row between Scottish Malt Distillers and the Nature Conservancy Council. The distillers needed a fresh source of peat to flavour the island’s renowned malt whiskies and were offered a bog called Duich Moss. Unfortunately for them, it also happened to be a favourite roost for the white-fronts. In the end an alternative source of peat was found and honour satisfied on both sides. Duich Moss is now a forgotten battleground and geese can roost in peace.

A single-track road leads past Loch Gorm, lost in a dun waste of moor grass and peat hags. Hooded crows sit on the telegraph poles, waiting for something to die, and the sky is the colour of solid slate. Farther on, in a field by the roadside, a couple of choughs are probing the turf for leather-jackets. The chough is a rare bird these days, but not on Islay, where eighty pairs nest on sea cliffs and in the tumbledown walls of deserted shielings. 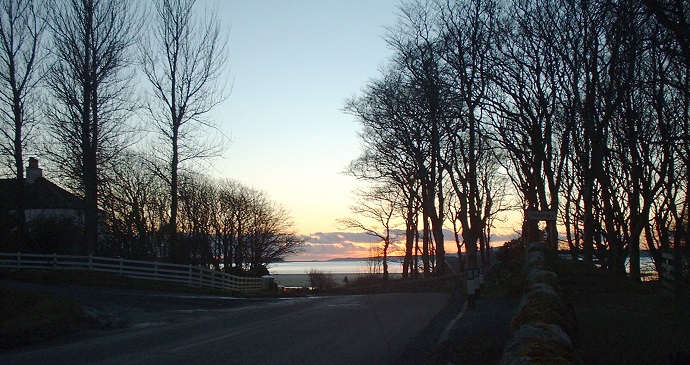 Back at Loch Indaal the evening flights are just beginning. As the lights of Bowmore begin to blink across the bay, the first packs of barnacles appear. More flocks pour in, turning high above my head, then spilling the wind to tumble earthwards in a rush of wings. By now it is so dark I can no longer make out the tower of Bowmore’s round church on the skyline; and still they come, filling the deepening chill with their anguished chunterings.

Later, after a hot bath and a fireside dram in Bruichladdich, the geese still fill my thoughts. Why should the sight of them strung out across a winter sky seem so uplifting? Maybe it is because we recognise them as symbols of something we have lost. Free spirits from the boundless tundra, they owe no allegiance except to the immutable impulse that has brought them south every winter since the Ice Age.

Now they will remain here, feeding and fattening until the lengthening days reawaken their migratory urge. One day towards the end of April the tug of the Arctic will become unbearable. Then they will take to the air in their thousands, calling excitedly as they gain height, and then head north, out towards Tiree, past the Cuillin of Skye, the lochs of North Uist, to be seen no more until they return from Greenland in the autumn.