Way down south, two tropics down and several time zones across, for one magical night and more than three passionate months on the cusp of an Indian summer and autumn in Flanders, Lille became Rio …

A wise woman once told me that Lille, hugging France’s most northerly border with Belgium, was la ville la plus méridionale, the most southerly city in France. Nothing to do with the climate, but the warmth of its people and welcome. And so, despite a distinct late September chilly nip in the air, hundreds of thousands locals and visitors took to the streets to launch the latest incarnation of Lille3000. 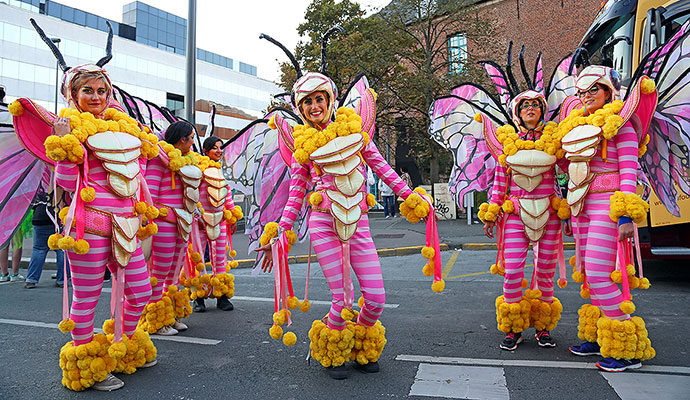 New readers start here. Way back in 2004, Lille was appointed European Capital City of Culture. The year began with a party and an avalanche of invention, imagination and creativity and when the time came to hand the baton to the Irish and Greeks, Lille decided that that the fun was not going to stop and immediately created Lille3000, with a promise to reinvent the city and its region with a world-class arts fest every couple of years, with an option to review the policy the following millennium. And so, in 2006, the city centre was transformed into a Bollywood fantasy, with the old Gare Flandres railway station illuminated as the Taj Mahal, and the main thoroughfare lined with elephants.

Now in its fourth season, Lille3000 has dressed that same rue Faidherbe with a dozen of artist Fabio Ricardo’s towering totems shipped over from Brazil’s famous Mardi Gras. The opening weekend saw the city dance, strut and swagger in celebration of Rio, one of the five 21st-century Renaissance cities feted by Lille for three dazzling months of memorable weekends.

The dress code for opening night was clear: “A poil ou aux plumes!”.  Modesty forbids me to go into too much detail as to my own costume for the evening. Suffice it to say that it involved a last-minute foray to pound shops and garden centres, judicious and hitherto unexplored use of gaffer tape, pipe cleaners and twine, and that more than one Disney princess north of Marne la Vallée had lost her sparking crown before I hit the city centre at 8pm on Saturday night, a couple of bières blanches and a hearty estaminet supper to the good. 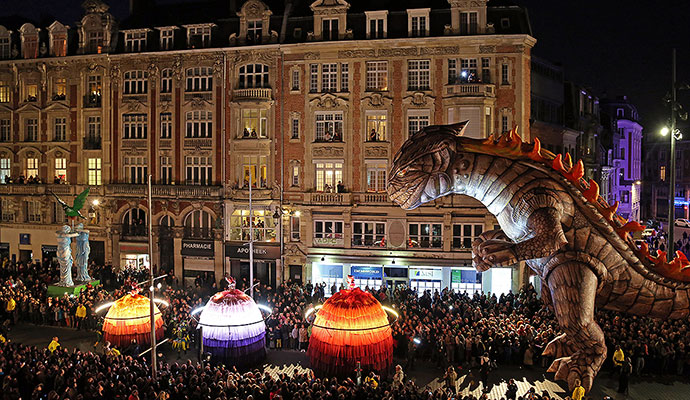 The parade began by Gare Flandres and reached the opera house, then snaked round to Grand’ Place where we waited. Cheers from crowds in the previous squares and a seismic rumble of drums shaking the cobbles, the lights of a thousand smartphones from rows of the multi-tiered crowds creating a microscreen wall heralding each new arrival. All street lights had been dimmed and silhouetted on every balcony and in each window of the familiar buildings of the squares were privileged spectators, themselves forming a backdrop to an anticipatory son et lumière as images of Brazilliant beaches, faces, parties and personalities were projected onto the gabled façades outshining the gilded symbols of France’s own sun king in a kaleidoscope of colour as the samba rhythm got ever closer.

Rio may have provided the illuminated backdrop and monumental totemic taut-buttocked statues, but the samba rhythm came from 2,000 local drummers, musicians and dancers in homemade headdresses and costumes. The parade was headed by France’s very own Giants of the North, those brobdingnagian figures of domesticity that are the emblems of every town from Lille to Dunkerque. Towering fathers with tankards and mothers with babies, quintessentially French, yet totally appropriate to welcome the great giant heads of the extravagant Latin floats to follow. Hovering above, a vast inflatable Godzilla loomed and swerved across the crowds, and three motorised farthingale dresses topped by a trio of opera singers, coloratura queens of the night in pantomime fright wigs and miked up to the nines, belched out airs and choruses from Carmen and Traviata.

A tender moment occurred when a flying acrobat swooped down from the skies to kiss the face of Tobias Huseman’s extraordinary ethereal teardrop marionette Dundu, before returning to the night sky, performing gyroscopic somersaults from writhing cranes along the way. Each float, along with several extravagantly decorated trucks, brought a fresh batch of veteran musicians and fruit-bedecked showgirls signposting their own after-show gig, followed by yet another marching band, drum corps or strutting samba line of feathered headdresses. It was heady stuff, and when the clockface above the theatre showed us that we had been hopping on the spot, craning our necks and waving our camera phones in the air for more than two hours, we could still see the floating dinosaur tail and swooping arcs of the acrobats as they glided along the rue National towards the Esplanade. 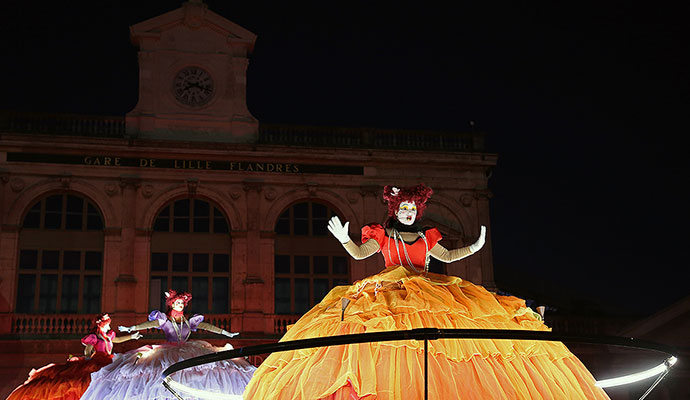 The crowds scattered, many to find back doubles through the ruelles and backstreets of Vieux Lille to that same Esplanade and bag a place for to watch the fireworks, set off from the walls of Louis XIV’s citadel. Others spilled along the squares or explored hitherto ignored corners of the centre in search of more music, served through the night whether on official stages or makeshift arenas. There was a traditional bal musette guinguette accordion ambiance at square Foch, home to the city’s monument to a lullaby, as well as electro and club sounds on the stages outside the theatres and opera houses, and even Zumba on Grand’ Place. The sounds of music spread from the Bois de Boulogne all the way to the Gare St Sauveur and the party beat at the Maison Folie Moulins.

But this is Lille3000, meaning it is so much more than just one night. The Renaissance concept goes beyond Carnival in Rio: this is the theme of a 21st-century reawakening, as the world emerges from depression to realisation of the glorious potential of its people and its talents. Seoul, Phnom Penh, Detroit and Eindoven are also bringing their gifts to Lille between now and January. Around 800 events and 35 world-class exhibitions are programmed in the city and beyond across the département du Nord, and in the first week of the festival I have explored only a few (but I am going back for more).

Every season of Lille3000 brings its celebrated metamorphoses – delicious installation art to gladden the heart and quicken the step and turn back the body clock just enough to make your day. Godzilla is not the only giant inflatable guest at the party this year: as Korean artist Choi Jeong Hwa has created so many fabulous giant bonbons around the city, including a Carmen Miranda explosion of tropical fruit amongst the slightly foxed bouquinistes of the Vieille Bourse; Lucy & Jorge Orta’s angelic clouds float under the glass and girders of the old station; and there’s also the refreshed return of old favourites, including the iconic tulips that greet arrivals on the Eurostar, the melted fast-food van, cascades of tableware spilling through a church and general dottiness inherited from previous incarnations of Lille3000. 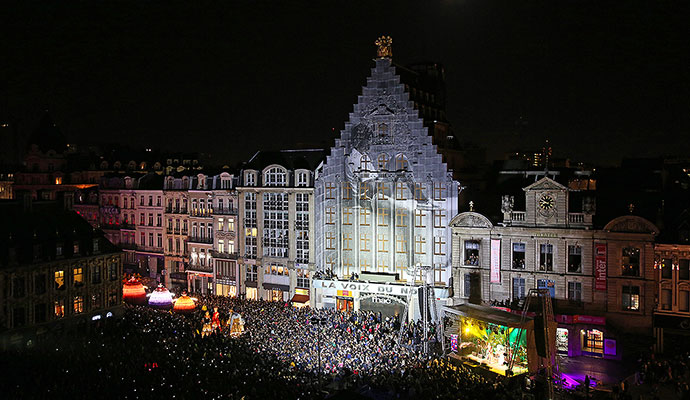 Over the next few weeks, I’ll share the gems of the exhibitions and performances in the ever-evolving programme. President Obama and Gene Kelly join Rodin, Picasso, Breughel and Renoir Pere et Fils to explore the fleeting nature of joy at the Palais des Beaux-Arts. Adam West’s Batman and John Tenniel’s Alice in Wonderland are made over as great Flemish portraits at the Tripostal and later this month there will be two important shows devoted to Chagall in Roubaix and Tourcoing.

None of these shows will be quite what you expect, for this is Lille3000 and the passion, youth and experience of this unique city will always have the first and last word. My abiding memory of the opening night is of the iconic Voix du Nord building, home to the fiercely independent local paper born of the French Résistance in the occupation of 1941. Before the images of Brazil were shone on the walls, through the evening and long after the last partygoer had staggered and swaggered home as the smooth clean up team began to sweep the squares, another of Lille3000’s metamorphoses dominated the square. We had all lived a Latin dream for the evening, but pasted across the façade of the Voix du Nord was the haunting image of a young migrant (above), courtesy of the artist JR – a reminder of the world we live in today, when crossing cultures and continents comes with a price for some and responsibility for all.

Lille3000 Renaissance continues until 17 January 2016. Themed weekends to come include: