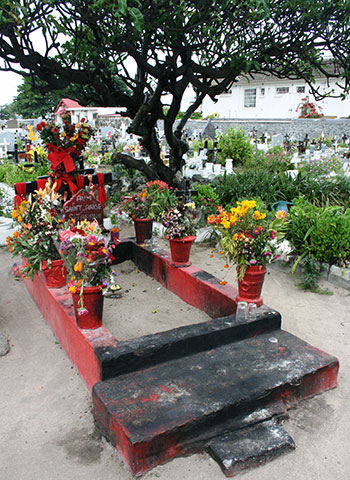 The place of Le Sitarane in Reunion’s history and folklore has been assured by people’s unshakable fascination with his story. It is said that he was actually quite a pleasant man until he was led into crime and black magic by one St-Ange Calendrin. They formed a gang, which began in 1907 to commit the horrific acts, forcing their way into their victims’ homes, burgling them, murdering them and using their bodies in black-magic rituals. Fear seized the population around St-Pierre and Le Tampon for two years, as the gang repeatedly evaded capture. Eventually, ten arrests were made. The ringleaders, St-Ange Calendrin, Sitarane and Fontaine, were condemned to death. However, shortly before the execution, Calendrin’s punishment was mysteriously toned down and he was deported to French Guiana. Sitarane and Fontaine were publicly guillotined in St-Pierre in 1909.

Sitarane’s tomb still holds both fear and fascination for the local population. Those who dabble in gris gris (black magic) visit his grave to ask for assistance in their practices, whilst those who fear black magic ask for his protection. His grave, which is red and black, is almost always strewn with offerings of rum, cigarettes, red material and candles. From the main entrance to the cemetery, the grave is on the far left near the wall, under a tree. Locals would advise you not to take photos of it, for fear of upsetting the occupant. It is also considered bad luck to mention Sitarane by name.

(Photo: the tomb of Sitarane in St-Pierre © Thierry Caro/Wikimedia Commons)