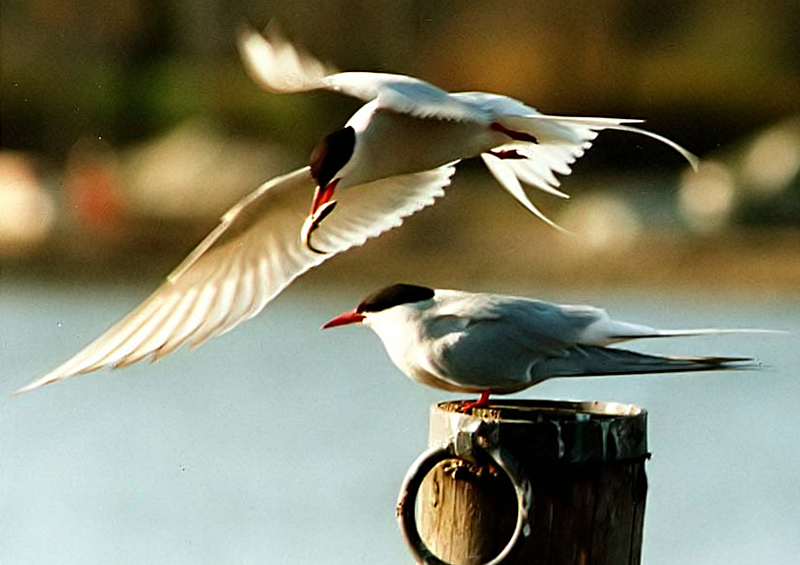 It seems like a scene from Alfred Hitchcock’s The Birds: hundreds, if not thousands, of terns dive-bombing the innocent humans who are out strolling along the shore. Add to that a soundtrack of harrowing screams and birdwatching becomes a terrifying, extreme sport. Arctic terns have the physique of a sleek fighter jet and are equipped with a pointed, arrow-sharp red beak – when aimed and directed at high speeds it will puncture your scalp and draw blood (to this I can testify). What you have to remember (whilst rubbing your head) is that the Arctic terns don’t hate you – they’re just a little defensive.

Wherever nature is lacking, nature also tends to compensate. When it comes to building nests, Arctic terns lack skills – the birds lay a pair of eggs on open, gravel-strewn fields, typically inside a crude little indent of pebbles. The eggs are tiny, coloured greenish white with black and grey spots on them. Once they hatch, the babies are just teeny weeny balls of fluff with black speckles. The two-inch-tall birds tend to wander clumsily while their parents are out collecting fish to feed them with. It’s no surprise that birdwatchers in heavy hiking boots can easily crush the eggs and babies and not even know it.

In response, the Arctic tern collective is a highly defensive bunch, with appointed lookouts that fly high and sound a piercing alarm call for incoming predators. Approaching threats are met with a regiment of tern forces that will actually line up and take turns dive-bombing the enemy until he or she runs away screaming. Arctic terns are also equal-opportunity defenders and will protect the nests and babies of all birds in the area. Even after their own fledglings have grown up, Arctic terns will keep an eye out for the young eider ducklings and the puffin chicks. In most seaside areas, it’s a game of ‘hot and cold’: as you get closer to the baby birds, the terns get crazier.

The birds’ message is clear: tread lightly! It’s not hard to avoid the terns’ territory, but there are times when you may have to cross. Watch where you step and keep your head low. The birds always aim for the highest point, so as long as you are shorter than others in your group, you’re safe. As a deterrent, tourists are often handed plastic poles to carry over their heads, though something tells me that the terns are getting smarter and have learned the difference between plastic and flesh. Wearing a hat up high on your head might help.

Icelanders feel a great affinity towards the kría, the local name that matches the sound of the bird’s banshee cries. They don’t view the terns as violent, respecting instead the birds’ solidarity and their passion for protecting all birds. You’ll find the kría depicted on stamps, on the signs of restaurants and summerhouses and on the hulls of boats. It’s not the lion or eagle crest of some nations, but quite fitting for Iceland – the bird is small, but if necessary, it’s got a bite to match its bark.