Skip to the content
David Horwell is a tour operator, photographer and writer specialising in the Galápagos. He has travelled extensively throughout South Amercia and in 1978 became a licenced Galápagos guide. He now runs Select Latin America (www.selectlatinamerica.co.uk) running small group tours every year. Here he discusses the islands, their future and his own travel history.

Other islands with a similar diversity of endemic wildlife (eg: Socotra) are little known yet almost everyone has heard of the Galápagos – how much of this popularity is due to the Charles Darwin connection? Was it this Darwin connection that inspired your first visit? If not, what did?

Darwin was the first person to popularise Galápagos and his best-selling books Voyage of the Beagle and Origin of Species both include graphic accounts of the islands and their curious creatures – this certainly helped propel them into the world’s consciousness. He described experiments with the marine iguanas and mentioned the diversity of the tortoises and mockingbirds. The finches’ importance came later after he examined the specimens that he and other crew members had collected. He regretted that he had not kept better track of which finches came from which island, having noted that there was a huge variety of beaks that may have arisen from one parent species. Today, the islands acknowledge the significance of Darwin by naming everything from volcanoes to beaches after him, as well as some dodgy statues in various places in the towns.

I was brought up in Bromley, not far from Downe House where Darwin spent over half his life, so I must have heard about him in my youth. It was doing A-level Biology that introduced me to the famous finches and the ‘enchanted’ islands, but I was equally enthralled by the stories of pirates, whalers and Swiss-family-Robinson inspired settlers. I too wanted to escape to far-flung islands but do something useful and earn my keep, so working as a naturalist guide was a dream job.

Rising sea levels are becoming an increasingly urgent issue in the Pacific – to what extent will this affect the Galápagos Islands? What do you think the future holds for the archipelago?

As the Galápagos are tips of oceanic volcanoes, the waters around are very deep which means the larger ones will survive rises in sea level, while the low-lying ones might not. Indeed there are already ‘hidden’ submerged ancient islands to the southeast of the archipelago, which are the result of erosion and the moving of the Nazca Tectonic Plate towards Peru. Climate change generally is more of a challenge as only a few degrees change in water temperature can destroy the eco-system; the famous blue-footed boobies are greatly down in numbers, possibly as a result of the absence of sardines. However, it’s human intervention that has caused the most damage ever since the 16th century, the introduction of mammals like dogs, cats, donkeys, rats and – most destructive of all – goats, has wreaked havoc. Only in the last 50 years the conservation of the islands has been made a priority, but the last 30 or so has also seen a boom in tourism. Though boat tourism has been strictly controlled, the land-based construction of hotels and the local immigration explosion has created pressure on the colonised parts of the islands. The Ecuadorian government has introduced strict laws to conserve the islands, but they have not always been enforced and, for example, illegal fishing has sometimes been punished with derisory fines. The problems today are mainly political will and funding for conservation, plus the dangers of introduced parasites through so many planes and ships arriving. UNESCO helps keep an international eye on the islands, which is ostensibly positive, but has no real effect. 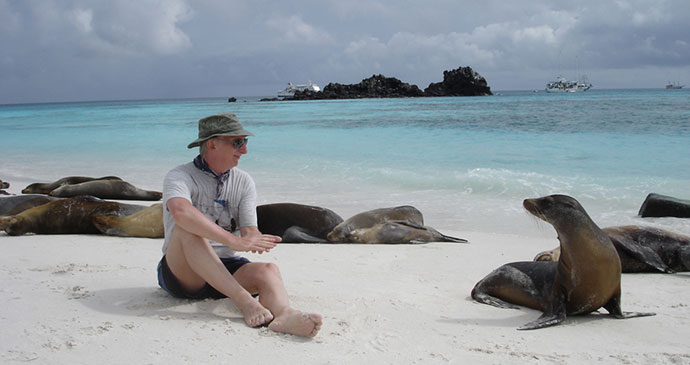 Sea lions are a common sight in the Galápagos © David Horwell

You regularly give talks at consumer events such as the Rutland Birdfair, how does the experience of talking at these events differ from leading a tour?

Leading a tour is a much more interactive experience, you have to think on your feet and respond to what’s going on around you. Plus make sure no-one falls off a cliff or gets bitten by a sea lion. It also takes diplomatic skills to try and keep all the passengers happy when they have such varying interests, from bird photography to botany. The  boats all have to have local licensed guides on board, so a tour leader also has to work well with the local guide without stepping on his or her toes. Giving a lecture is more a question of preparation and some damn good photos to entertain as well as inform. They are much shorter than a tour so you can’t really compare the two. Whilst leading a tour is more challenging, it is an infinitely more rewarding experience.

Having travelled extensively throughout South America, is there one destination that sticks in your mind as an all-time favourite?

Apart from the Galápagos, I have several favourite destinations: deserts, mountains, jungles and cloud forests – it is hard to pick on just one. Probably I’d go with Torres del Paine in Chile, which is an amazing place for a naturalist, photographer and for my first interest (like Darwin’s) geology. However, I first went there over 30 years ago when it was relatively unknown, not sure if I’d enjoy it so much today with all the coach parties and posh hotels. 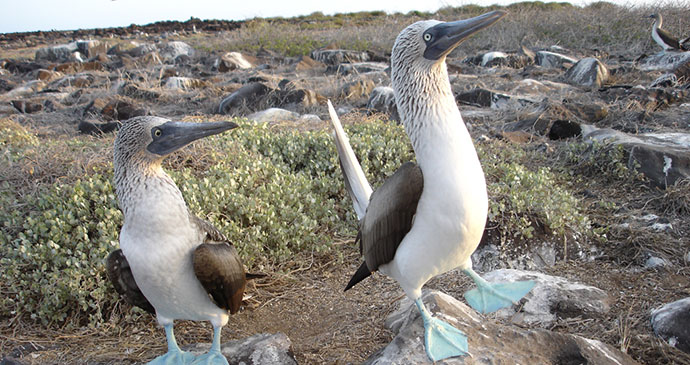 What is your earliest travel memory?

Flying a kite as a nine year old on the pebbly beaches of Norman’s Bay in Sussex, (where the French are supposed to have landed in 1066). I also enjoyed ‘surfing’ on a lilo —  I nearly came a cropper when a big wave threw me on the beach head first. Later I hitched to Paris when I was barely 16; I started travelling when young.

If you had to choose, what would be your top five ‘Don’t Miss’ of the Galápagos’ flora and fauna?

You are one of the few Britons to be a licensed Galápagos guide – what does this involve? How much emphasis is placed on sustainability and conservation?

To become accredited I needed a natural science degree, three languages, a month’s course and some weeks in the field shadowing another guide. I am no longer able to guide there professionally as one has to be a Galápagos resident and work a minimum number of weeks per year. In those days there was more emphasis on science and research, but the guides have always been duty bound to enforce the strict national park rules to prevent tourists damaging the islands or the wildlife. For instance, tourists must not deviate from marked trails and always be in sight of the guide and they must not remove anything nor drop any litter. Today you can’t eat or smoke ashore on the uninhabited islands. So the guides are the front line of conservation and it is often them who report illegal fishing or other activities. Unbelievably people have been caught at the airport trying to smuggle out live iguanas and even big seabirds in their cases.

Have you, either on the Galápagos or elsewhere, had any scary moments when in the presence of wildlife?

When we used to snorkel at night it was scary to come close to sharks with just a beam of torchlight shining in front of you, but they have plenty more tasty food around so it wasn’t really a big risk. More dangerous was when I chased a large bull sea lion away from one of my passengers on a beach, then he turned on me and I fell in the waves with all my camera gear. A crew member fortunately was on hand with an oar to shoo him away. Those beasts can weigh up to 250kg!

Take a look at our Galápagos Wildlife board on Pinterest.