Fort building was a major feature of the early years of independence, a flurry of construction that produced the Citadelle Henry, the Caribbean’s most imposing fortress, as well as the quasi-Versailles palace of Sans Souci.

However, Haiti’s history means that it is simply littered with old forts, many in quite spectacular locations. Near Les Cayes is the splendid Citadelle des Platons overlooking the southern coast, at Saint Louis du Sud the overgrown Fort Anglais guards a lonely tropical island, while the green Artibonite Valley is dotted with them, especially at Marchand Dessalines. Striking Fort Drouet is just a couple of hours away from Port-au-Prince. At Môle Saint-Nicholas in the far northeast, half-a-dozen forts guard a beautiful coast, little visited by foreigners. 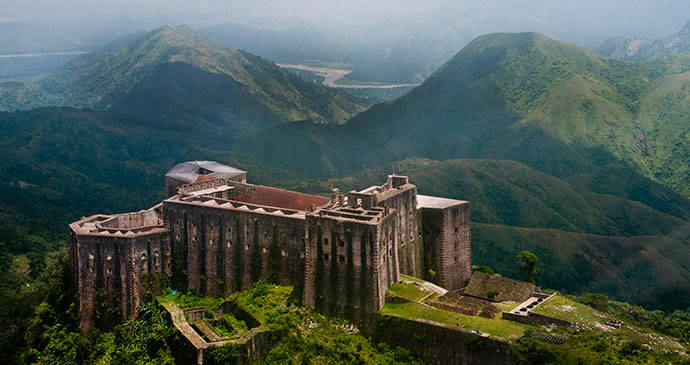 Citadelle Henry, the mountain fortress that all but symbolises the great victory of the Haitian Revolution, is the country’s stand-out tourist sight, and, if at all possible, the one thing you mustn’t miss from a trip to Haiti. It’s an hour from Cap-Haïtien, set in fabulous scenery: the landscape suddenly opens up and there it sits above you, its massive scale designed to humble anyone approaching.

Even before you reach it, the statistics about the Citadelle Henry demand that you be impressed: on top of a mountain 900m above sea level, 14 years to build with the labour of 20,000 people, and with walls 4m thick and 40m high. By some way the biggest fort in the Caribbean, it could hold a garrison of 5,000 people for a year, and yet it never saw its guns fired in conflict.

One of the series of forts built on the orders of Jean-Jacques Dessalines after independence, this little-visited fort is one of the most spectacular historic sites in Haiti. It sits on a plateau at an altitude of 600m, surveying Les Cayes and the southern coast. A a wide, low structure, it has four artillery bastions and a series of underground rooms in the northwestern corner. The heritage organisation ISPAN hopes to do some restoration work on the fort and improve access to a site that could be a real jewel for local tourism, but for the moment you’re likely to have the whole place to yourself, bar a couple of local kids curious to see foreigners. 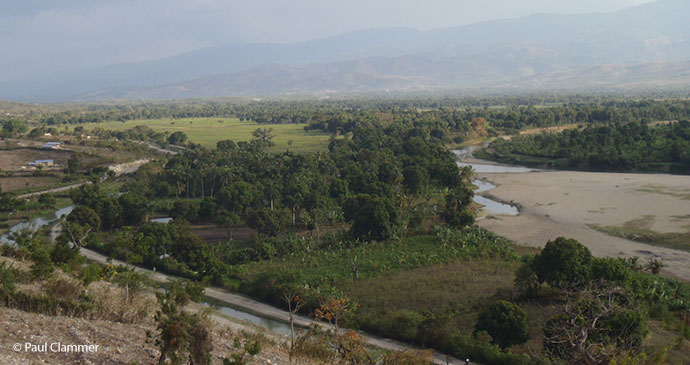 This was the location of one of the most hardfought battles of the Haitian Revolution, the siege of Fort Crête-à-Pierrot. The fort, built by the British during their brief occupation of the region, is a long rectangle with extending bastions at each corner. The views south along the Artibonite River and the Chaîne des Matheux Mountains show its strategic importance. There are several cannons scattered about behind the ramparts, and at the centre of the fort, the large square powder magazine – the only remaining original building.

In 1802 the French army, 12,000 strong, bombarded Crête-à-Pierrot but never broke through. After nearly three weeks the defenders ran out of food and water. Incredibly, the remaining troops still managed to fight their way out and break through the French lines to rejoin Dessalines in the mountains. When the French finally entered the fort, they found only a few white prisoners remaining, all for the cost of 1,500 dead.

This fort sits on a small island in a bay near Saint Louis du Sud. It is much larger than its mainland counterpart, and covers almost the entire island in a giant skewed pentagon. It’s very overgrown – in several places there are mature mapou trees with great buttress roots slithering over the brickwork. It’s possible to walk around the island if you don’t mind getting your feet wet. Some fine stone detailing (imported specially from France) remains, just one sign that this fort was once the cutting edge of military architecture. Although tumbledown, it’s very evocative and great fun – exactly the sort of place where you feel like searching for buried treasure with an old parchment map and ‘X marks the spot’.

Nearby is Fort Olivier. It’s in much poorer condition, romantically crumbling at the end of the tiny peninsula. A solitary cannon still guards the approach to the bay. It’s worth a clamber – the views are better from the western side. The fort and beach is where Saint Louis du Sud’s fête patronale is held every 25 August. 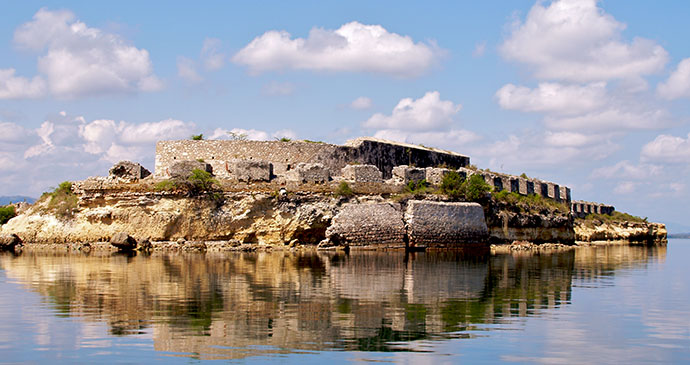 Known locally as Fort Saint Joseph, Fort Dauphin was built in 1731 to celebrate the birth of King Louis XV’s son (then also the name of the town, which took its current name of Fort Liberté during the revolution). It sits on a thin spit of land guarding the west side of the bay, a 10-minute walk (also accessible by car) from the town square.

There are several other forts guarding the opposite (eastern) side of the bay, built by the French during the same period. Best preserved is Fort Labouque, which sits on the beach at the narrow inlet to the bay, though you’ll need a boat to get to it. Fort Labouque has an intriguing design, with a curved defensive wall with two round bastions at each end, and a magazine and barracks behind. Also on this side of the bay are the smaller forts of Fort St Charles and Fort Saint Frédérique, both in some state of disrepair but rife for exploration (by boat).

It would seem to beggar belief that, in a country as small and densely populated as Haiti, a set of major historical sites could simply be lost, but this was the case with Fort Drouet and its surrounding colonial plantations. The fortress, only recently redisovered, is splendidly preserved, with five strong bastions, thick masonry walls pierced with loopholes and cannon emplacements; and inside a powder magazine, covered with red lichens, and two water cisterns. With its commanding mountain-top position atop a high ridge, overseeing both the coast and back across the Artibonite Valley, Fort Drouet is a truly knockout historical site.

Fort Jacques certainly has a commanding position, looking out from a height of 1,300m over Port-au-Prince and its bay. It’s the closest fort to the capital, and is commemorated on the back of the 500HTG note. It has thick double walls forming an embankment, three sharply pointed bastions and, on its fourth corner, a wide rotunda. Inside the courtyard are a series of rooms and munitions stores with vaulted ceilings, and outside the ruins of a powder magazine. At least one of the cannons still remaining on the site is British, captured in battle by Toussaint Louverture.

A second, more ruined bastion, Fort Alexandre (named for Pétion) sits on a nearby hill, protecting Fort Jacques’s only exposed flank. It was never completed and is now quite ruined. 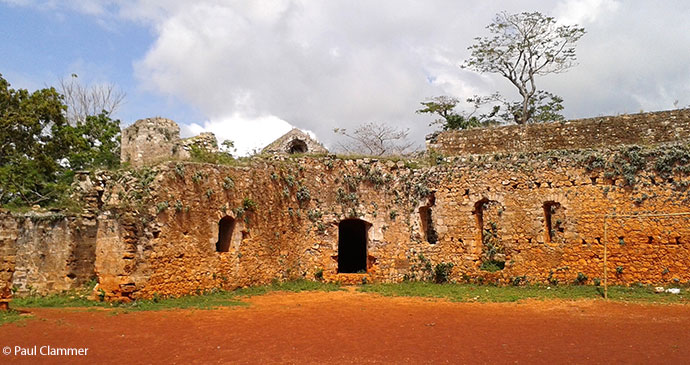 Commanding the view out across Jacmel Bay, Fort Ogé (locally also called Fort Cap-Rouge) is part of the chain of defensive forts built across Haiti by Dessalines in 1804. It has impressively high rampart walls with a couple of watchtowers and a wide courtyard. Look out for graffiti left by American soldiers during the occupation. A local association proudly looks aft er the fort, keeping it locked, clean and ready for visitors.

By 1740, Saint-Domingue was already the world’s largest single sugar producer, and Cap Français needed protection from the jealous eyes of colonial rivals. To this end, the French built a series of forts along the cliffs outside the city, lined up to target any ship trying to navigate the reef-protected entrance to the harbour. The forts can be reached by continuing on the rough road past the Jardins de l’Océan Hotel at the end of Carrenage.

Fort Picolet is is the real prize of the series of forts, with some great exploring to be had. It covers the most strategic part of the channel through the reefs. The road ends by the Hotel Rival, so head onto the beach (Plage Rivál) and follow the path along the bottom of the cliffs. The fort is clearly visible on the headland. Be careful here – the path can involve a bit of scrambling along the shore, and although locals say that the fort is accessible any time of day, it would still be sensible to be wary of high tides. It’s about half an hour’s walk from Carrenage.

A chain of hilltop forts are just visible from Route National 1 as you travel between Saint-Marc and Gonaïves. Th ese are the guardians of Marchand Dessalines, a small market town sitting amid the well-watered Artibonite Valley. Often overlooked by visitors, it’s a piece of the patchwork of Haitian history well worth the diversion.

Fort La Source (also called Fort Culbuté) guards the town’s water supply. It had a bastion surrounding a courtyard, a separate powder magazine and water channels running through a sizeable pool. It’s one of the liveliest historical sites you might visit in Haiti, as the pool (called Bassin Felicité) is a popular spot for doing laundry and swimming. As you explore, watch out for clothes drying on old cannon barrels. The open space outside the magazine is regularly used for Vodou services.

Next is Fort Decidé, which is followed by Fort Innocent, Fort Madame, Fort Doko and finally Fort Fin du Monde.

The French built a series of forts to protect the entrance to Môle Saint-Nicholas, giving defenders a continuous field of fire against potential attackers. The largest is the Batterie de Vallière, just past the cemetery. Its imposing gate is the town’s iconic site, while the fort takes its name from the colonial governor at the time. The walls stretch an impressive 196m along the coast. The fort consists of two platforms (now partly overgrown), pierced with loopholes for muskets and cannon embrasures. The large courtyard contains the remains of a couple of buildings, although part of it is currently fenced off and being used, it would appear, to keep goats. Only one cannon remains – an abandoned barrel on the lower platform. The rest of the cannons were taken by Christophe during the building of the Citadelle.

There are three other forts in the series – Batterie de Grasse (Grace), Batterie d’Orléans and finally Le Vieux-Quartier.

If you’re feeling energetic after visiting Citadelle Henry, there are more fortifications just over a kilometre away along the narrow ridge running south from the Citadelle. Collectively called Ramiers, they guard the only exposed flank of the Citadelle as well as overlooking the road south to Dondon. The (very rough and rocky) track starts next to the hospital. There are redoubts on the walk from the Citadelle, shaped like pyramids and guarded by small moats, as well as a large lime kiln.

You’ll need to be a handy scrambler to gain access. After the second redoubt you’ll find the ruins of the building called the Queen’s Palace and the barracks, plus two more redoubts. Everything is wild and overgrown, and covered with moss, ferns and orchids. Very few people visit here, and exploring with the site and the views to yourself invokes a very pleasing Indiana Jones feeling.