Hugh, our Senior Marketing Executive, goes off the eaten track to discover Gaziantep, a Turkish city brimming with food, just north of the Syrian border.

All in all, the consensus was I was crazy. “You’ll become radicalised!” cried one, “You’ll get captured!”, said another, “Can I have your car?” asked a third. The chancer.  When I told friends and family about my upcoming trip to Gaziantep, a Turkish city just north of the Syrian border, their reactions had left me feeling a little worried.

However I wasn’t going because I was nuts, but rather because of them.

You see, Gaziantep (often still referred to as just Antep – the ‘Gazi’ prefix meaning ‘the war hero’ was only added after the city’s heroic resistance against the French in 1921) is famous throughout Turkey and beyond for the quality, and quantity, of its pistachio nuts. Drive the short 20-minute journey from the airport to the city and you will see groves of gnarled pistachio trees dotting every arid slope, in the sprawling city shops selling ‘fistik’ appear on every corner, and among the jumbled bazaars and streets of the Old City, the staccato crack of shelling pistachios is drowned out only by the rat-a-tat rhythm of copper craftsmen hammering out their handicrafts.

While eaten both in handfuls as a snack or for breakfast in the delicious katmer, a thin, flaky pastry filled with cream and pistachios (the very best of which can be found at Zekeriya Usta, a third-generation bakery that makes 500 of the pastries a day), the most famous use for Gaziantep’s pistachios is as filling for baklava, the arrestingly-sweet dessert of layered filo pastry. 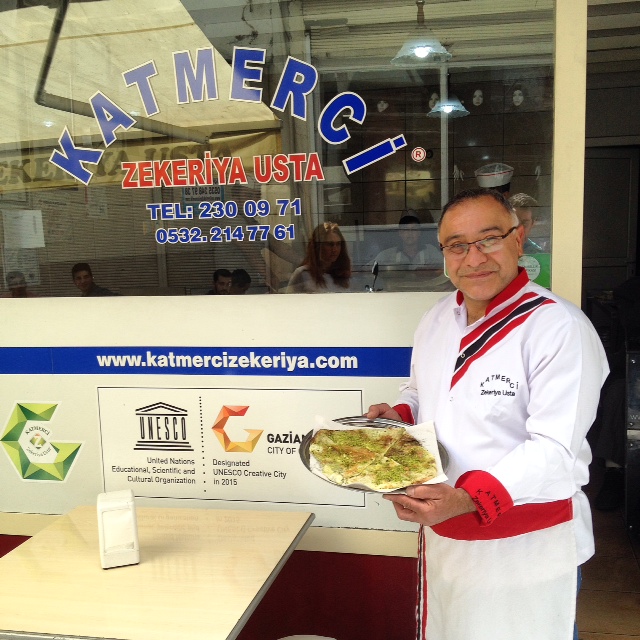 There are over 100 baklava bakeries within the city’s limits, but perhaps the finest – and certainly one of the most popular – is İmam Çağdaş, a traditional restaurant and bakery situated in the Old City around 100m south of the castle. It’s one of the largest in the city employing 62 men, and only men, simply to make baklava. And I was lucky enough to be getting a tour.

Stepping upstairs through the restaurant, past milling bow-tied waiters, I entered the bakery to a wall of heat. The air was thick and clouded with flour and in the haze, ghostly white-aproned figures rolled billowing sheets of dough to almost impossible size. Made of just flour, water and eggs, the dough used is a simple one but the trick lies in getting it thin – tradition dictates that you should be able to read through it – to ensure the perfect crunch. 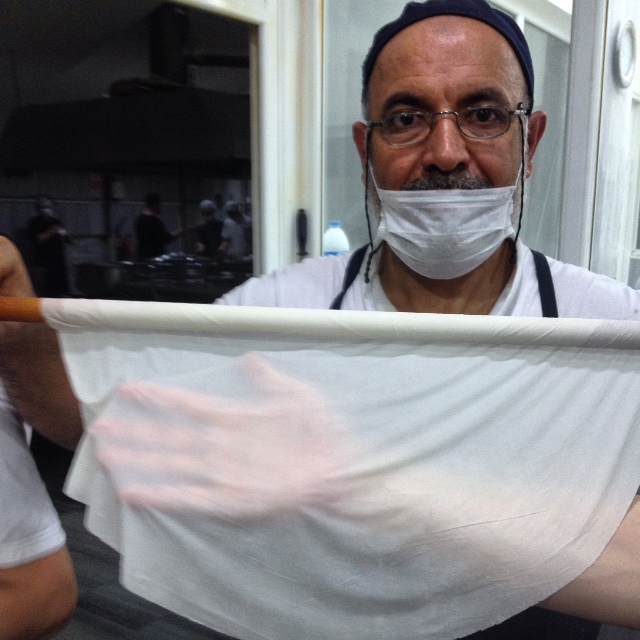 Yesterday in #gaziantep, Hugh visited Imam Çagdas, one of the city’s most famous #baklava bakeries. Here’s a video of a pan of bubbling baklava just after the hot syrup has been ladled on top. #turkey #gototurkey @gototurkeyuk

In the next room, more aproned workers layered the sheets of dough into large circular tins. After three or four sheets and a brush of oil, handfuls of bright-green pistachios were scattered onto the dough, before the whole process was repeated again and again, building up the pastry’s iconic layers. Then after baking in the wood-fired oven, hot sugar-syrup was ladled over the pans to give the baklava its unmistakable stickiness (and a few more calories). The result, eaten with a glass of strong Turkish tea, was quite unlike any other baklava I’d ever eaten. The trick, so Selim our guide told us, was to hold the pastry upside down to eat it – that way the sticky sugar-syrup drips through the filo layers as you eat it rather than onto your hands! 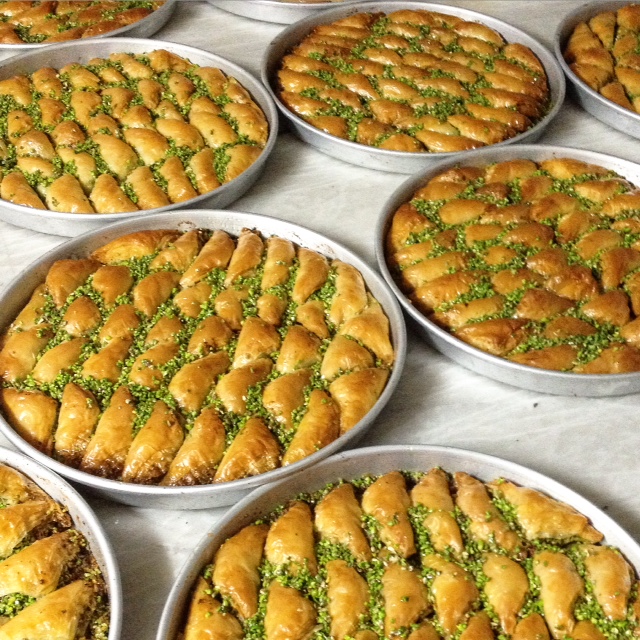 It will take a while, I guarantee it, but when your stomach starts to rumble again, there’s much more for the curious foodie traveller to discover in Gaziantep than simply tempting desserts. In fact, such is the breadth of dining options on offer that the city has been recognised by UNESCO as a centre of gastronomy in its Creative Cities scheme. A succession of twelve cultures, each leaving its stamp on the city – from Byzantine and Seljuk to the Ottoman Empire – means there are a staggering 450 dishes that are unique to Gaziantep, including lahmacun (a sort of Turkish pizza), the finest kebabs in the whole of the country, and yuvarlama, a quite extraordinary soup made of goat’s milk yoghurt and bulked out with tiny lamb meatballs. 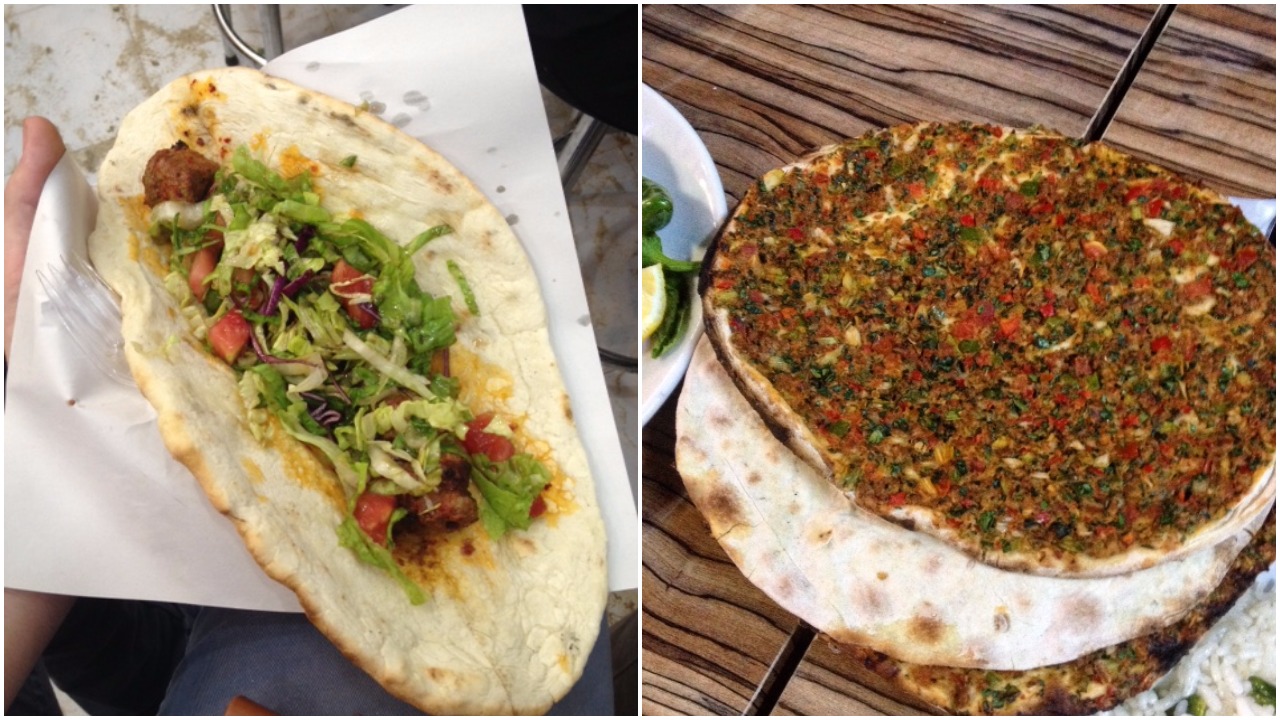 The best place to learn more about the city’s cuisine is at the Emine Göğüş Culinary Museum. Opened in 2008, the museum is housed in the old home of Turkey’s first tourism minister and, for the price of just 1 Turkish Lira (around 25p), you are treated to detailed displays (in English) on the importance of food to the city, learn how every Gaziantep woman is ‘born a chef’ and gaze at collections of huge copper teapots and platters. Also on the site is MUSEM, Gaziantep’s cooking school, where enthusiastic home cooks and eager professionals alike can learn how to prepare the city’s traditional dishes in the state of the art kitchen or gain a recognised certificate after a three-month course.

Travelling in Gaziantep isn’t easy, despite the numerous daily flights from the tourist hub of Istanbul. Few locals speak English, temperatures vary from searingly-hot in the summer to sub-zero in the winter, and you may, like me, have to answer a couple of questions from the police when you land back at Heathrow. But with the most exciting food culture on offer in the region and the beginnings of a nascent tourism infrastructure (the Zeugma Mosaic Musuem is oustanding), it should be on the travel list for anyone interested in ethicurean exploration. Quite simply, you would be nuts to miss it.