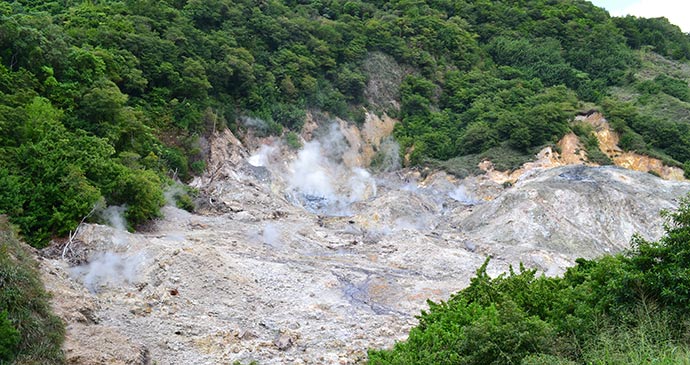 Glancing out of the windows of our Boeing 777 approaching Saint Lucia allowed us glimpses of the island: rolling, rainforest-covered hills punctuated with mostly coastal settlements and steep green peaks. The volcanic origins of the island were immediately obvious and the Pitons, Saint Lucia’s iconic twin peaks, could be seen along the western coast. But one mountainside stood out from the others. This one was bleak and empty – no sinuous creepers wound between the trees of the forest – the moonscape cried ‘deforestation’.

Later, when we checked into our apartment, I spoke to the concierge. ‘Oh, no’, she smiled. ‘That’s the drive-in volcano.’ Intrigued, we booked onto a Volcano Safari and the next morning we were heading towards the best-known remnants of Saint Lucia’s sulphurous past.

The island of Saint Lucia, one of the Windward Islands of the Caribbean, is just 27 miles long and 14 miles wide, with a combination of high mountains, forests, low lying lands and beaches. A central mountain range runs from north to south, with a largely inaccessible interior. Only two roads provide access to Castries in the northwest from the international airport near Vieux Fort in the south. The previous day, we’d taken the major road running up the eastern side of the island, cutting west through the mountainous centre, across to the western coast, and then north to Castries and Rodney Bay. Today, we cut south from Castries along the other road that runs between the western beaches and their settlements and which eventually weaves its way back to Vieux Fort

I say we cut south, more accurately the car must have weaved in every direction, including north, as we navigated hairpin after hairpin at a mercifully slow speed. But this was our holiday and we revelled in the pace, marvelling at bananas and breadfruit growing wild at the roadside, spying narrow tracks leading down to tiny coves and watching as the Pitons grew ever closer. We passed Marigot Bay, best known as the location of the Rex Harrison version of Doctor Doolittle, a secluded and sheltered harbour invisible from the sea, where British ships successfully hid from the French fleet in the turbulent 18th century. As the road climbed over a headland the colourful village of Anse la Raye came into view, and we crossed a temporary structure and saw a bridge being built to replace one that was destroyed by Hurricane Tomas in 2010. 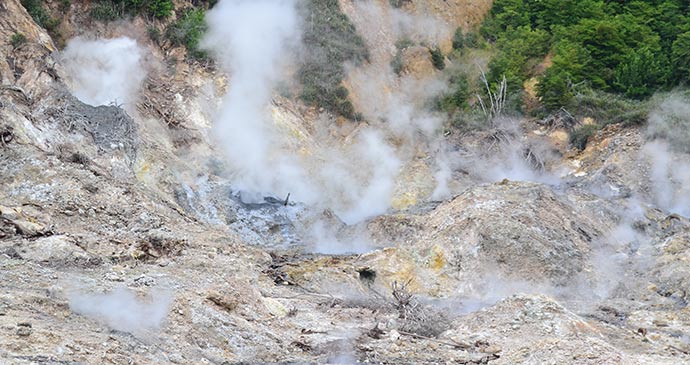 An hour and a half after leaving Rodney Bay we reached Soufrière, the colonial-era town with its pastel-coloured weatherboard houses set against the magnificent backdrop of the Pitons. From here it was only another short hop up to the volcano itself – the smell of rotten eggs (hydrogen sulphide) heralding our arrival. The Sulphur Springs cover a seven-acre area surrounded by steep slopes, some forested, but others bare of any life.

Now known as the Drive-in Volcano, the site is believed to be a crater that collapsed about 40,000 years ago. Much of it is fenced off for safety, but several viewing points provide excellent opportunities for photographs. Visitors are led by expert guides who explain about the geological history of the Caribbean basin. While the volcano itself is inactive (lava hasn’t flowed here since 1780), visitors can see bubbling mud and boiling springs, as well as numerous small, scientific instruments that continuously monitor the atmosphere and temperature. With some fumaroles ejecting water at 170⁰C, the instruments are there to detect variations that could be a sign of changing geological conditions deep underground.

Today, the guide explained, the readings are no different from any other day. Not that the readings are ‘normal’ in any way; where chemicals leech out through the ground, plants fail to thrive. And acid rain, caused by tropical outbursts falling through volcanic gases in the atmosphere, finish off any remaining vegetation in localised areas downwind of the volcano. We drove back along the twisting coastal road to our hotel remembering the scar on the hillside that we’d seen from our vantage point high above Saint Lucia’s volcanic peaks. 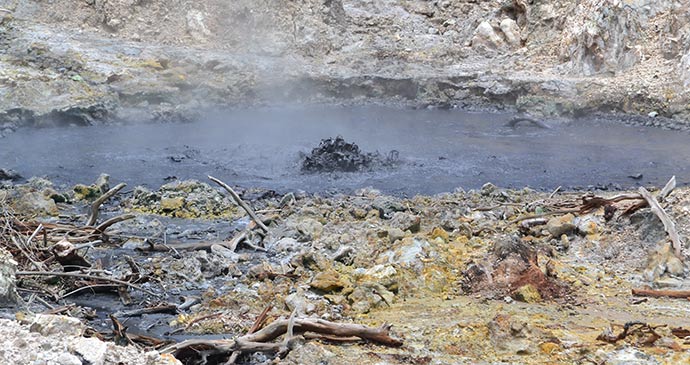