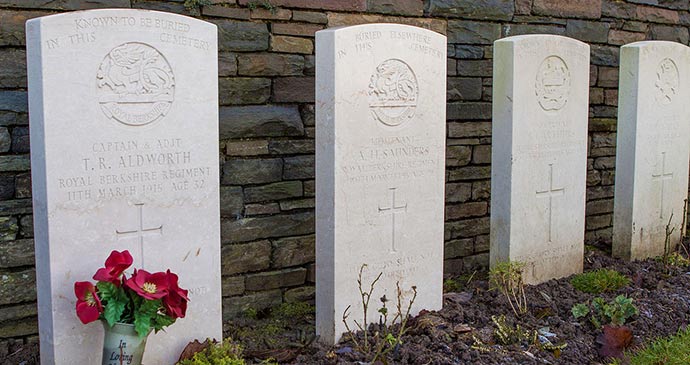 While the horrendous statistics of the dead and wounded at the Somme and similar headline-grabbing battles stick in the collective mind, it’s easy to overlook the likes of the Battle of Neuve Chapelle in March 1915, close to Lille, cited by one reader as being forgotten in our World War I Battlefields guide.

She raises an interesting point. The 90th anniversary of the battle, described by our reader as ‘more than just a skirmish’, was held on a cold, grey day in 2005 and was reported to have passed with little comment. Indeed, apart from the memorial commemorating the lives of Indian soldiers and labourers lost in the First World War, Neuve Chapelle has never been widely publicised, either by the Brits or the French.

Yet the offensive from 10–12 March 1915, with a toll of 10,000 dead or wounded, remains important for being the first set-piece by the British from static trench lines. While previously seen in other forms, these were new to many soldiers and staff officers. Lessons learnt were not lost in subsequent battles.

Use of the small village, lying roughly midway between Béthune and Lille, just over 30km south of Ypres, Belgium, was planned early in 1915 by Douglas Haig, who was at that time was in command of the First Army. The Battle of Neuve Chapelle by Geoff Bridger (Pen & Sword Books) is devoted to its relevance.

The initial idea was that by capturing the German lines and then the village, they could reach the nearby Aubers Ridge, whose high ground meant the enemy’s lines of communication between La Bassée and Lille could also be disrupted.

The Aubers Ridge clash, too, gets forgotten, yet more than 11,000 British casualties were sustained, the vast majority within yards of their own frontline trench. Mile for mile, division for division, it was one of the highest rates of loss during the entire war. There is, at least, a memorial to Neuve Chapelle at Rue du Bois, Richebourg; there is nothing to mark the Aubers Ridge assault.

Happily, I have now learnt from French colleagues that the Commonwealth War Graves Commission (CWGC) have created an itinerary around the area, and that Le Nord tourist office are likewise developing new tours based around Armentières. As it stands, Loos is still regarded as the major battle in 1915, both in our guide and, to a large extent, by battlefield tour companies. With 457 CWGC cemeteries listed in Pas-de-Calais – 394 in Le Nord, 368 in the Somme and 131 in Aisne (plus the German and French ones) – it remains a sad fact that it is unrealistic, as well as incredibly costly, to produce a truly comprehensive coverage of all of them.

Likewise, the First Battle of the Marne in September 1914 which fought to protect Paris (and covered in our guide) also had far reaching repercussions for the Great War. Yet, according to military historian Sir Hew Strachan, it ‘has been forgotten by the French and almost entirely forgotten by the British’. Fortunately the largely untold story is explained at the Musée de la Grande Guerre in Meaux, just under 50km east of Paris and close to the Marne battlefield (see page 84 of our guide).

Despite Strachan’s claims, the battle is well-known in France, typically for the fact that around 600 Parisian taxi drivers drove an estimated 6,000 French reserve troops to the frontline to fight the Germans. But the British were also at Marne in significant numbers under the command of Sir John French, for ‘a great defensive battle … fought on a scale that nobody had anticipated’. It prevented a quick German victory, kept France in the war and encouraged generals to believe they could win a major manoeuvre battle.

Though our guide concentrates on the familiar war on the Western Front, there were other factors at play, such as the deadly game of cat and mouse between Allied shipping and German U-boats in the North Atlantic, the romantic image of T E Lawrence and the Arabian campaign, and the horrors of the Eastern Front. The latter, at its greatest extent, encompassed the entire frontier between the Russian Empire and Romania on one side, and the Austro-Hungarian Empire, Bulgaria and Germany on the other.

True to its name, the Great War was a genuinely global struggle, and lesser-known battles raged worldwide.