Shrove Tuesday, any schoolchild will tell you, is Pancake Day. True, you can witness many traditional pancake races in many a village, such as that run at Olney, Buckinghamshire, since 1445, allegedly the mother of all pancake races, commemorating an absent-minded woman who ran late to church upon hearing the bell, without putting her pan down. The service would have been a shriving, or blessing to help the faithful through the Lenten fast until Easter: hence Shrove Tuesday. Rich foods would have been used up, hence the pancakes and the name used elsewhere, Mardi Gras, meaning Fat Tuesday. And if you weren’t given the full shriving, at execution for example, you received ‘short shrift’. 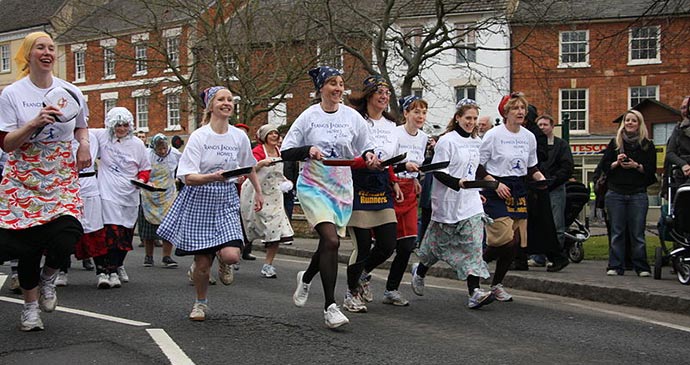 Olney’s pancake race is one of most famous in Britain © Robin Myerscough, Flickr

The Olney Pancake Race starts at the marketplace and ends at the church, where the winner gets a prayer book and a kiss from a verger. In Toddington, Bedfordshire, children climb Conger Hill and lie with their ears to the ground to listen for the witch frying her pancakes as the clock strikes noon (the midday bell itself is a recurrent feature of ancient Shrove Tuesday customs). An equally ancient pancake race runs at Winster, Derbyshire, but don’t eat any titbits that fall from the pans. These are special racing pancakes made for toughness. Yarmouth, Isle of Wight, also holds a race in the town’s square.

However, more weird and wonderful things happen on Shrove Tuesday than the odd bit of egg on face. Much seems to involve screaming scrums of muddy men instead of women in aprons.

At Ashbourne in Derbyshire, for instance, there’s the Royal Shrovetide football game between the Up’ards and Down’ards, defined as people living on opposite sides of Henmore Brook, along whose course the riotous game, starting with the ball being ‘turned up’ at 2pm on Shrove Tuesday (and again on Ash Wednesday), runs back and forth until well into the evening. 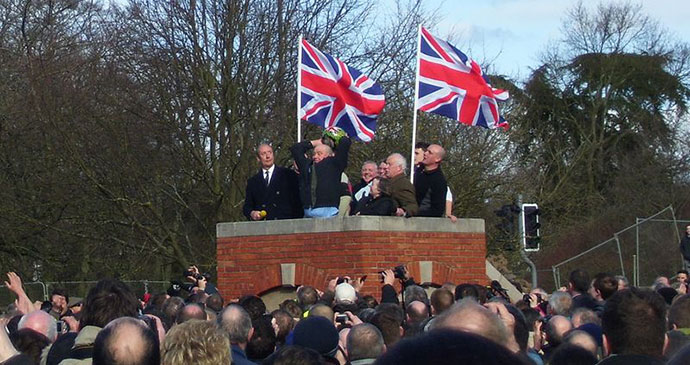 The ball for each day is beautifully made from leather stuffed with cork and painted with scenes relevant to that year’s ‘turner-up’. Those won become prized family heirlooms. The goals are three miles apart at Sturston and Clifton and the shops are boarded up against damage as ‘the hug’, as it is called locally, heaves back and forth. Trees are split, fences flattened, and washing poles uprooted. No-one knows what started it all.

In Atherstone, near Nuneaton, Warwickshire, another great scrummage of a Shrovetide football game starts with the ball being thrown from the upstairs of Barclays Bank at 3pm, and the main road is closed for the game. No-one knows
exactly why, but here the ball can be water-filled, and the winner is the person holding the ball at 5pm.

The raucous scenes are similar at St Columb Major near Newquay in Cornwall at 4.30pm on Shrove Tuesday, when Hurling the Silver Ball starts. With the Townsmen versus the Countrymen, and up to 300-a-side, the fast-running game can degenerate into a huge heaving scrum from which the £200 silver ball can be smuggled out to ‘lie luff’ under a hedge until there’s a chance to go for one of the goals – stone troughs two miles apart.

Again the shops are boarded up – ‘You’d think the Hezbollah were coming through,’ said enthusiast Ivan Rabey – and as the pitch covers the parish, the game makes Guinness World Records for having the largest playing area. The game was already old by the reign of Queen Elizabeth I. Its origins? ‘No-one knows,’ said Rabey. Similarly huge scrummages take place on massive pitches at Sedgefield near Darlington at 1pm, and at Alnwick in Northumberland where the Duke of Northumberland’s piper leads the ball on to the pitch, usually at 2.30pm. The goals are a quarter-mile apart and each team is 150 strong.

A similar mass football game to the Ashbourne one takes place at Workington, Cumbria, on Good Friday, and also shortly after Easter – usually the next Saturday and one other day. Hailing the Ball involves a specially made coloured ball being thrown up at the Cloffocks car park and two huge teams, the Uppies and Downies, heaving up and down to get the ball their side of the River Derwent. At Jedburgh, Borders, its Uppies and Doonies is held a couple of weeks earlier, but it’s all basically the same game, as is the Orkney Islands’ version at Kirkwall on Christmas Day and New Year’s Day.

Near St Ives, Cornwall, another Hurling the Silver Ball takes place on the Monday nearest 3 February, but not on 3 February. It is thrown by the mayor some time after 9.30am and passed, not hurled, from person to person over the whole town; whoever is holding it at noon wins a crown coin. At one time, the sides were selected as simply anyone called John, William or Thomas against the rest of the world. 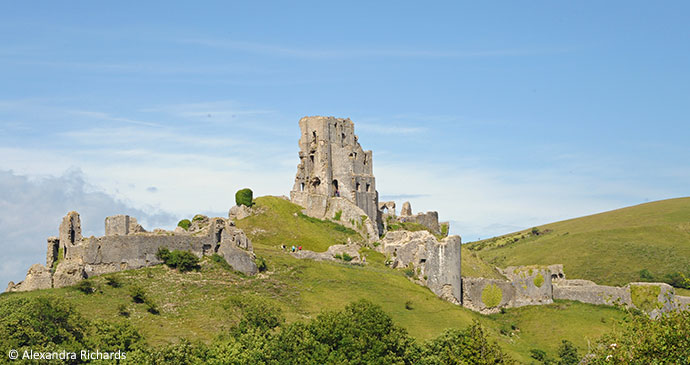 Very different is the ritual at Corfe Castle, Dorset, where at noon on Shrove Tuesday those who have completed quarrying apprenticeships must carry a quart of beer, a penny loaf and the equivalent of 6 shillings and 8 pence to the town hall for the solemn conclave of the Ancient Order of Purbeck Marblers and Stonecutters. They then kick a football all round the town and carry a pound of pepper – why pepper, no-one really knows – down to Ower Quay in Poole Harbour to mark their right to carry stone there.

A more elegant form of exercise is undertaken at Scarborough, Yorkshire, where, when the Pancake Bell is rung at noon, the town takes to the South Foreshore for skipping in great lines with long ropes, plus a few pancake races. The bell is a remnant of that once-common old shriving bell. But why skipping? A tourism official said: ‘Well, it’s been going on for at least 200 years, and it helps get an appetite up for pancakes, but the truth is, no-one knows.’