Lying just off the west coast of Africa, the tiny islands of São Tomé and Príncipe remain unspoilt by mass tourism, making the former Portuguese colony the perfect place for adventure. Immerse yourself in local culture as you explore white-sand beaches, misty rainforests and crumbling plantations. From exploring plantations to catching a glimpse of the ibis, the islands of São Tomé & Príncipe have so much more to offer than their tiny size would suggest.

Catch a glimpse of the islands’ exotic birds

The rivers and streams of the east coast road are good places for birdwatching. The best place to spot the endemic dwarf olive ibis is around the ruins of Monte Carmo (Ribeira Peixe), an area where all the endemic birds occur. The ibis is dull olive-brown in colour, with flesh-coloured legs and short flesh-orange bill, which is usually first seen flying from the ground, where the birds feed silently. The ibis is quite tame and normally perches on a low branch, a behaviour that makes it vulnerable to hunters, who occasionally catch it for its meat. Hardcore birdwatchers might want to head for the Xufe-Xufe river area in the southwest, where all 20 endemics also occur, including the elusive São Tomé fiscal. This bird has a long tail, yellow underparts, glossy black plumage on the back and a white broken line across the wing. Forests in the south of São Tomé are considered the second-most important for threatened bird species in Africa. The giant weaver nests around Santo António de Mussacavú, while the beautifully coloured giant sunbird is most easily found in primary forest above the Xufe-Xufe River. 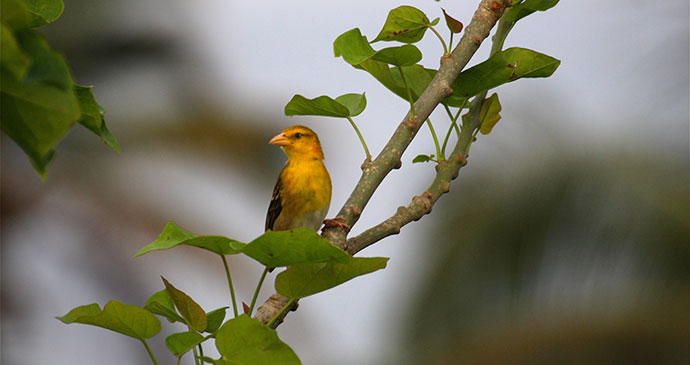 Admire the archipelago’s coastline from below the water’s surface

The bumpy underwater relief of the islands’ volcanic ocean floor mirrors the archipelago’s mountainous surface. Enjoy the undisturbed natural beauty of a habitat where the equatorial currents at the meeting point of the eastern and western Atlantic host a wealth of species, including sharks, rays, turtles, fan corals and many fish you won’t see anywhere else in the world.

There are plenty of good dive sites dotted around the coast of São Tomé as well as near Club Santana and Ilhéu das Rolas, just off the southern tip of the island. Príncipe has less human intervention and even fewer fishermen, trawlers and dragnets disturbing the marine fauna and flora of the shallow littoral than ST. At night, with the coral flowering, it turns into a garden. However, there is no dedicated diving infrastructure here yet, as the big player, the HBD company, are taking the cautious approach and will not offer diving without the presence of a decompression chamber. 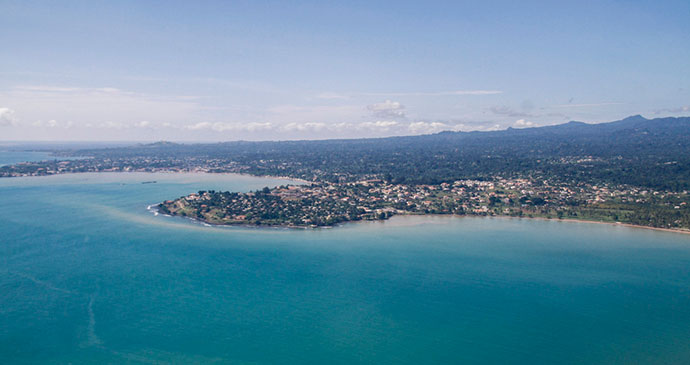 Climbing the island’s highest point (also, on old maps, called ‘Pico Gago Coutinho’ after the colonial admiral who first measured what, in 1918, was the highest mountain in the Portuguese empire), is one of the most physical and rewarding things to do on the island. You will hike through different types of forest, with views of misty peaks in the distance, and see amazing plants, trees and orchids close-up. Even experienced hill-walkers have found the climb demanding, unrelenting even, but the determining factor here is the weather. If you hit a lot of rain, the Pico is a tough walk indeed, slip-sliding your way up and/or down, carrying a backpack laden with water and overnight gear. Otherwise, the Pico is a perfectly possible proposition for anybody in good physical condition who doesn’t mind using roots and lianas to get ahead. 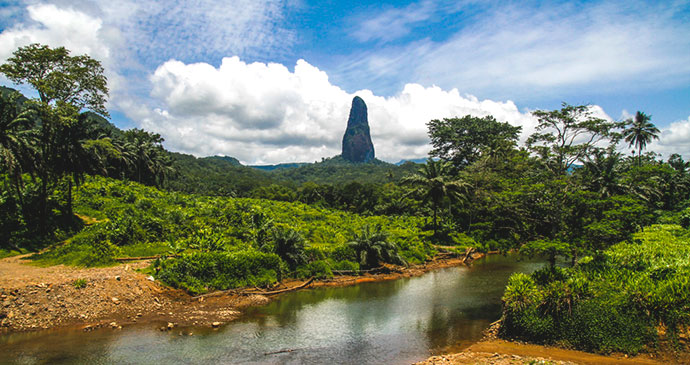 Relax on the idyllic Banana Beach

This is the island’s most famous beach – perfect for swimming, with white sand curving in a banana shape around turquoise waters. The easiest way to visit is to stay at Belo Monte. Another way of exploring the beach is on a 25-minute boat trip from Bom Bom. You can also hitch a ride or hike to Belo Monte and walk down from Belo Monte in about 25 minutes, via the 203 miradouro (viewpoint). A famous ad for Bacardi rum was filmed at this beach. On a recent visit we came across pieces of tortoiseshell, pointing to the fact that for all its UNESCO Biosphere status, turtles are still being hunted here. 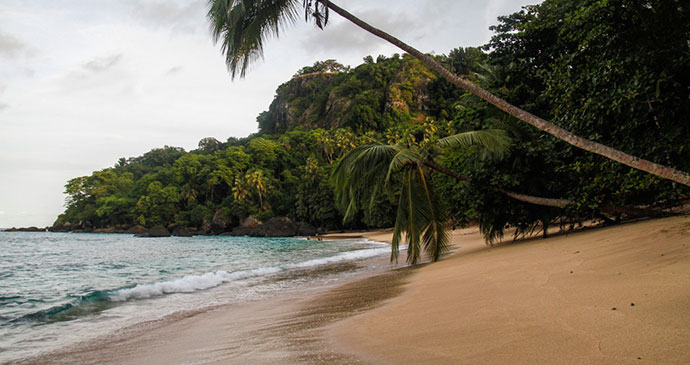 Covering an area of 1,657ha, Sundy is the biggest plantation on the island and gives you a real idea of how self-sufficient some roças once were. This was the only coffee-producing plantation on Príncipe. The governors’ house is no longer open to visitors, as it will serve as offices for new owners, HBD, who are planning plantation accommodation here too.

The plantation belongs to the state, and the former owner’s house is kept, waiting for state visits. There are gorgeous views out to sea from the balcony and the colour-co-ordinated bedrooms upstairs. The green one, closest to the bathroom and furthest from possible intruders, was the president’s; his bodyguards slept in the red and blue rooms. The whole place, with a large rectangular tree-lined square at its centre, is surrounded by a crenellated wall; over on the other side of the square, the former stables have beautiful horseshoe-shaped windows. Railway tracks can still be seen in the soil, with a rusting locomotive. 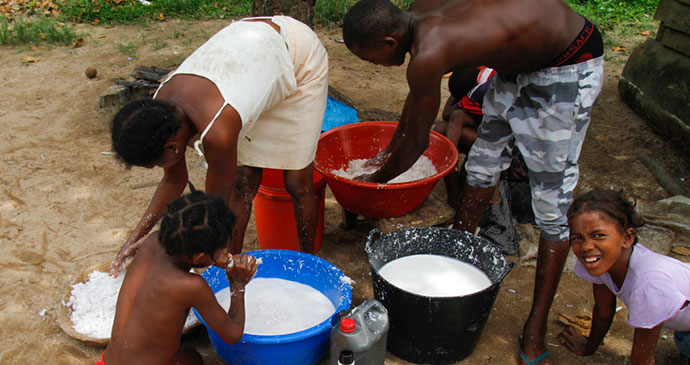