Mongolia is a fabulous wide-open land of extreme climate and extraordinary natural environment: it is the home of horses and herdsmen and one of the last great undisturbed wilderness area on earth. Participate in some of Mongolia’s cultural traditions — take a turn at milking a yak or ride out with a party of Kazakh eagle hunters. 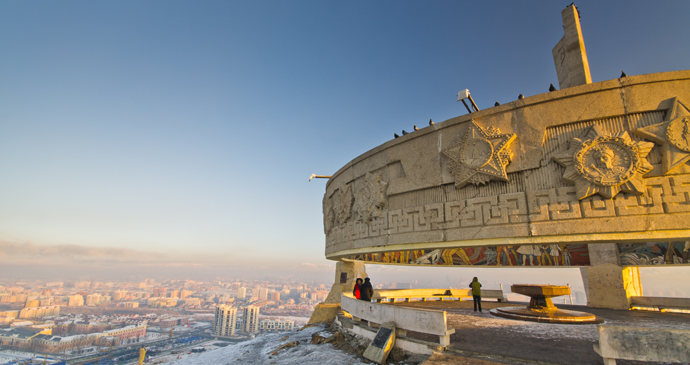 Ulaanbaatar was once a felt-tented capital made up of thousands of gers and temples; indeed, it was known as Ikh Khüree Khot, the Great Monastery Town. Now, Ulaanbaatar is a thoroughly modern, concrete city, teeming with people and humming with taxis and buses. Soviet-style apartment blocks mixed with modern developments and government buildings line long avenues, cut by ring roads and traversed by the main railway line between Moscow and Beijing. The city’s Gandantegchinlen Monastery (pictured above) is the centre of Mongolian Buddhism and houses a large library of rare books and manuscripts in Mongol and Tibetan on Buddhist philosophy, astrology and medicine.

Relax inside a nomadic ger 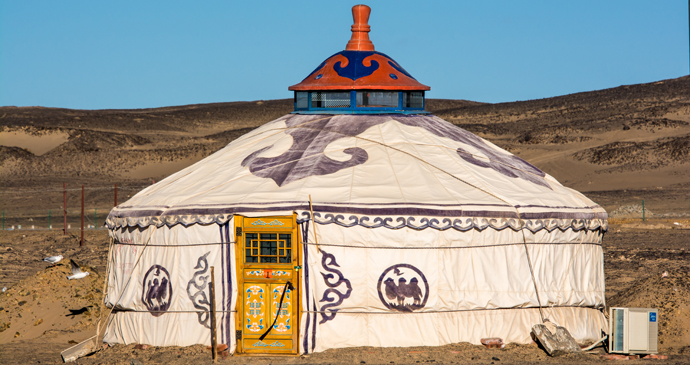 Let your eyes scan the horizon and, sharpening focus, you might see nestled together in the dip of a valley, or in some strategic place out of the wind, a tiny collection of gers (Mongol tents), set against an awe-inspiring background of mountains and river valleys. Nomadic lifestyle over the centuries has principally depended on this classic, collapsible, round tent. Beds are nestled close to the east and west sides and stacked with colourful cushions, packed full of blankets and neatly folded bedclothes for the night. At dawn, the woman of the house rises first to light the stove. She sprinkles a little incense on the flames, which gives a lovely aromatic smell. 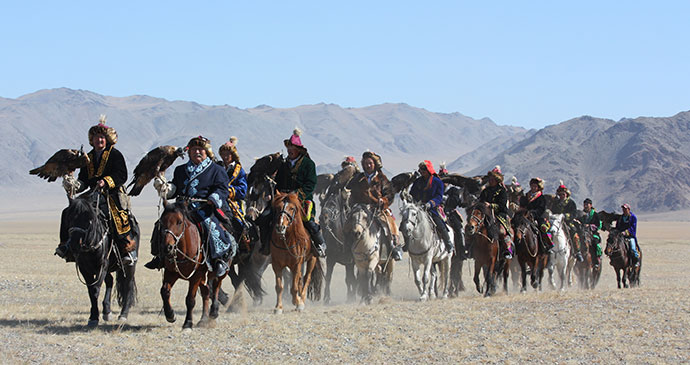 Mongolian horses, although small, are well adapted to the harsh environment where they have survived over the centuries and display tremendous stamina over long treks. A ride across the Gorkhi-Terelj National Park will offer breathtaking alpine scenery. In particular, the landscape of the Khan Khentii offers riders two strikingly different areas. Heading northeast from Ulaanbaatar towards the northern wilderness, the first part of the journey is over the open grasslands, but, should you head north to ride in the Gorkhi-Terelj National Park and Khan Khenti Special Protected Area, you will experience mountain forest taiga. 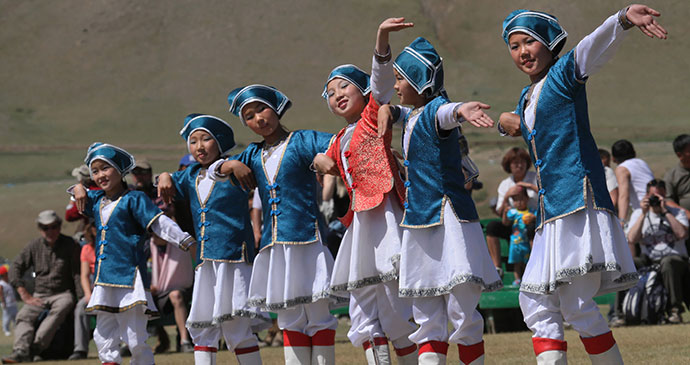 Traditional dances during the Naadam festival in Kharkhorin © Pierre-Jean Durieu

Held annually in July, the great Naadam Festival is a thrilling three-day sporting event that has been happening for centuries. The festival highlights Mongolia’s ‘three manly sports’ – horse racing, wrestling and archery; it is also a time when people remember their glorious past and are proud of their equestrian skills, the stamina of their horses and the strength of their arms. The combination of people and events presents an unforgettable spectacle to the visitor: colourful silken tunics, fresh-faced nomads, thundering hooves, flying arrows, wrestling bouts, which thrill and entertain thousands of spectators. 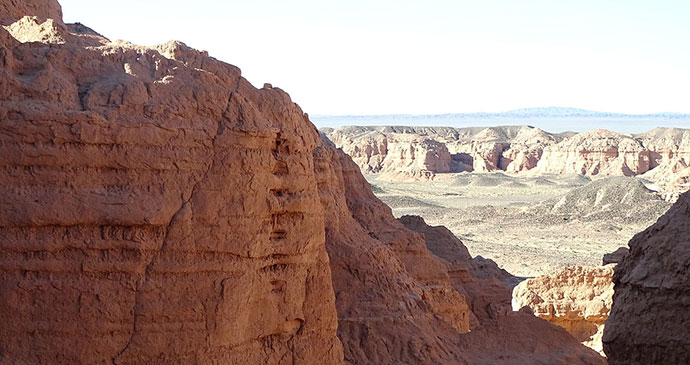 As well as fifty-two species above ground (including the Gobi bear and snow leopard), one thousand families and 250,000 of their livestock, the Gobi Gurvansaikhan National Park hosts five of the seven sub-orders of dinosaur, which range in age from 100 million to 65 million years. Ancient cartographers filled in unknown areas of their maps with the words: ‘Here be Dragons’.

One unique find consisted of the skeletons of two dinosaurs, protoceratops and velociraptor, locked in mortal combat. It is likely the plant-eating protoceratops was stalked by the meat-eating velociraptor, a dinosaur with savage jaws and a long pointed tail. It is thought they were preserved in their dying moment by a collapsing sand dune that buried them alive…