Starting this week, the first non-chartered international flights will leave Dundee Airport bound for Amsterdam Schiphol. Flybe’s latest route, already regarded as one of the airline’s most successful launches, will not only offer Dundonians unprecedented ease of access to the continent, but will open a door to European citizens interested in exploring Scotland’s fourth-largest city.

But why should international travellers begin their Scottish adventure at Dundee and not Edinburgh, Glasgow, Aberdeen, or, for that matter, Inverness? What does Dundee have to offer that other comparable cities do not? And why is now the best time to discover the one-time City of Discovery? Read on to discover just why Dundee deserves the increased attention that it has already started to receive. 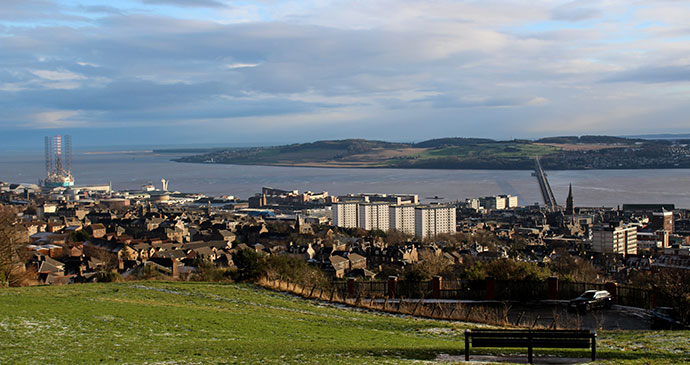 A view over the River Tay to Fife from Law Hill.

Although technically outwith Scotland’s central belt, Dundee enjoys a prime location between both Edinburgh and Glasgow to the south and Aberdeen to the north. Boasting excellent bus and rail links to the rest of Scotland, Dundee is perfectly placed for day trips to the country’s other major cities, including Perth, or excursions into the surrounding countryside.

Dundee is also located at the convergence of two long-distance footpaths and cycle routes, which stick closely to the coastal contours of Angus and Fife – the latter easily accessed via the Tay Road Bridge. It’s possible to walk all the way to Aberdeen or Edinburgh respectively should you wish, although both Arbroath and St. Andrews make for agreeable and achievable day hikes.

Though most commonly associated with the three Js, Dundee is in fact the historic centre for much more than jute, jam and journalism. Once at the heart of the shipbuilding, whaling and maritime industries, Dundee has a proud history that is celebrated the city over – not least at Discovery Point, an award-winning museum and the final resting place of the RRS Discovery. 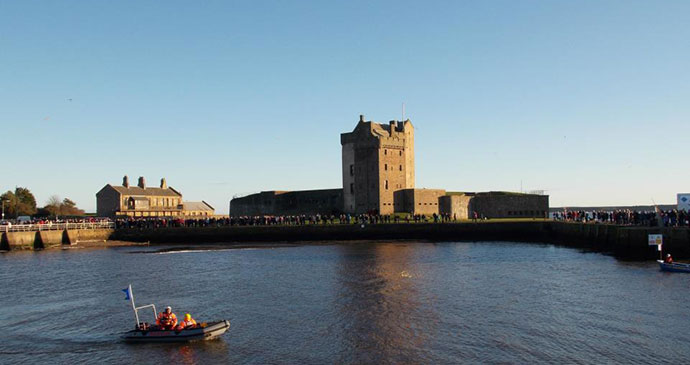 The crowds gather at Broughty Castle ahead of the New Year’s Day Dook.

Elsewhere, Broughty Castle, Verdant Works and The McManus: Dundee’s Museum and Galleries curate a comprehensive guide to the city’s past, from its early origins to its recent history. The V&A Museum of Design looks set to provide the next chapter of the story when it opens in 2018 – the centrepiece of a £1 billion plan to redevelop the city’s waterfront.

Far from being backward-looking or old-fashioned, Dundee is actually at the cutting edge of a number of disciplines, with Dundee University renowned for its contribution to medical and biochemical research and Abertay University at the forefront of computer game design (it was the first UK university to be accredited as a Centre for Excellence in Computer Games Education).

Abertay has hosted Dare to be Digital since it was established by the University in 1999, and the competition has attracted international attention since – not just in terms of competitors either, with developers like Electronic Arts and Rockstar North showing their continued support. Dundee Degree Show is also well attended, with Duncan of Jordanstone College of Art and Design holding a high reputation of its own. In 2014, Dundee was named the first UK UNESCO City of Design.

Despite losing its bid to be named UK City of Culture 2017 to Hull, Dundee has proven itself time and again to be a vital and vibrant cultural centre – even prior to the opening of the much heralded V&A. Dundee Contemporary Arts is a world-class exhibition space that also comprises a shop, a bar and a studio – not to mention a cinema esteemed for events such as Dundead and Discovery Film Festival. 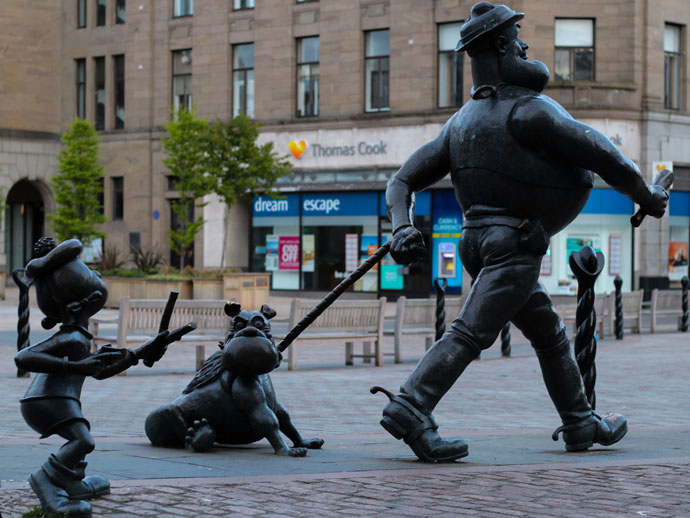 Desperate Dan takes Dawg for a walk as Minnie the Minx watches on.

Dundee is also home to some of the UK’s most famous cartoon strip characters, most notably Dennis the Menace and Gnasher. Many are immortalised around the city thanks to statues depicting Minnie the Minx, Desperate Dan and Oor Wullie. Just as important to the city’s sense of identity are its two football clubs and Elite League ice hockey team, while its proximity to Carnoustie Golf Links and St Andrew’s Old Course make it a popular base for golfers.

For what it’s worth, Dundee is reported to be the sunniest place in Scotland. While still prone to the characteristically changeable weather that make forecasts so difficult to predict, Dundee enjoys more sunshine on average than anywhere else in Scotland. Even the infamously unskilled William McGonagall appeared unusually perceptive when he described the ‘silv’ry Tay’…

A good thing too, because there is much to be enjoyed in both Dundee and the surrounding area in the sun: Broughty Ferry is perfect for a warm summer’s day, whether you’d prefer to promenade along its esplanade, sunbathe on its beach or spot dolphins from its medieval castle; Camperdown Park caters to visitors of all ages, with its adventure playground, wildlife park and putting green; while Cairngorms National Park, located a few miles to the north, is always on hand for a bit of adventure.