In this extract from her new book, A Cheetah’s Tale, Her Royal Highness Princess Michael of Kent recalls the first time she saw a cheetah in the wild.

Despite the surprising yet charming touch of tablecloth and candles – typical, I would learn, of Rosemarie [my stepmother] who made everything attractive; even wild flowers had been picked from shrubs to decorate the table – our first safari dinner was not a success. The staff waited at table wearing white gloves, just as Karen Blixen’s servants had been obliged to do on her safaris, which made their task of holding the slippery china plates almost comical. (Why china on safari? I asked myself, but this was an older generation.) Nonetheless, the stew looked and smelled promising and, with the addition of sweet-smelling wild herbs, tasted delicious. After dinner, I complimented Schultz, Papi’s chef on safari, and asked him what was in it. He chuckled merrily: ‘Mamba, missy.’ 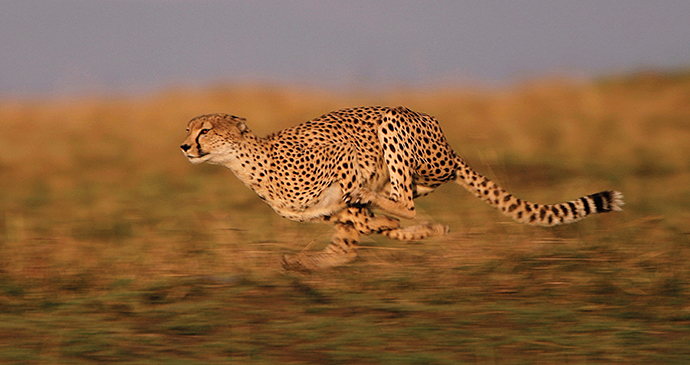 ‘We had been driving for a couple of hours and seen much game, when I spied my first cheetah’ © Jonathan and Angela Scott

It was the snake we had run over on the way to the camp. I rushed to the bushes – not a good start. Papi laughed as I weakly climbed up the huge tyre of the trailer and retired into the sanctuary of my mosquito-net tent, the temperature pleasant at least, the stars clearly visible above, and Africa’s night calls loud around me. 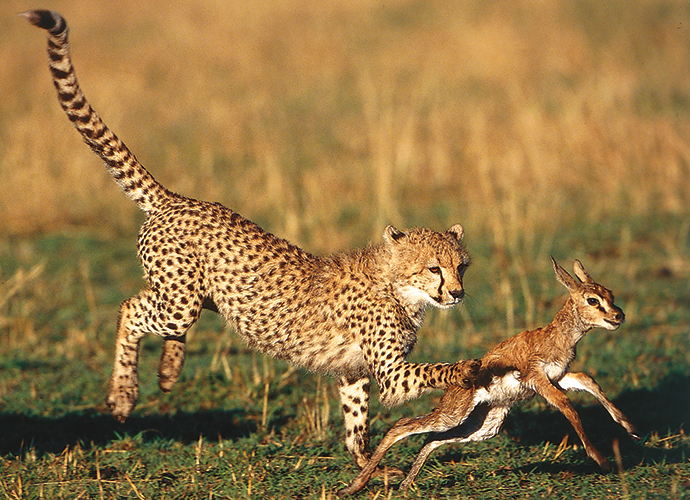 ‘That day I saw for the first time a cheetah at full speed hunting, and the thrill of it engulfed me’ © Jonathan and Angela Scott

The following morning, we rose early and drove across open country, watching the animals rising, the clear shape of where they had lain during the night still visible in the dew covered grass. We had been driving for a couple of hours and seen much game, when I spied my first cheetah. We had stopped for morning tea on a termite mound, which are often as high as a small house, perhaps three or four metres, and can be very old. Cheetahs especially use them to study the landscape for potential prey, but this time we were the observers. We spread our tablecloth on the top and were unpacking our sandwiches and thermos of tea, when to my horror I saw ants appear from everywhere and crawl over everything. I looked at my father, who grinned, and I watched in awe as he picked up a sandwich covered in ants, bit and munched happily. ‘Adds to the flavour – you’ll see,’ and I guess they did. Then he pointed and I lifted the binoculars hanging around my neck. There he was – in a large stretch of dry grass – my first cheetah about to make his charge. I zoomed in and watched open-mouthed as he ran, his action indescribably elegant, almost floating above the ground alongside his antelope target, whirling and twisting as he shadowed it, his long, white-tipped tail swinging to balance him as he made sharp turns. The antelope managed to escape, but that day I saw for the first time a cheetah at full speed hunting, and the thrill of it engulfed me.

Read more of HRH Princess Michael of Kent’s story in her book, A Cheetah’s Tale…