From cheese rolling to worm charming and just about everything in between, England has its fair share of unusual events. If you’re looking for a day out with a difference these are for you! 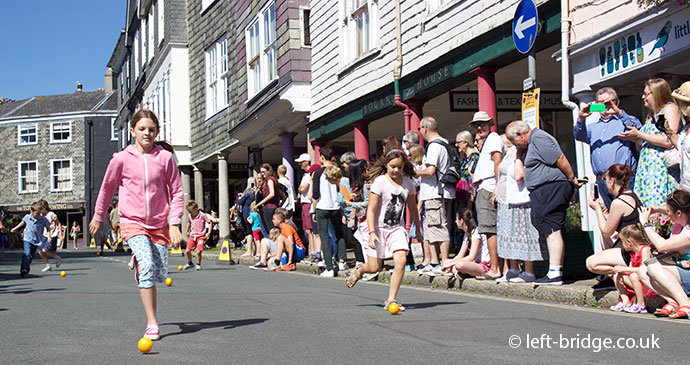 Unique to the South Devon town of Totnes is the Orange Race which is held after the annual carnival in August. Locals pursue the fruit down the hill, the speed (and danger) of the pursuit dictated by the age of the contestant; there are races for all age groups, from four to over 60. If you want to see the true definition of breakneck speed, watch the adult men’s group. Apparently Sir Francis Drake started the ball rolling, so to speak. 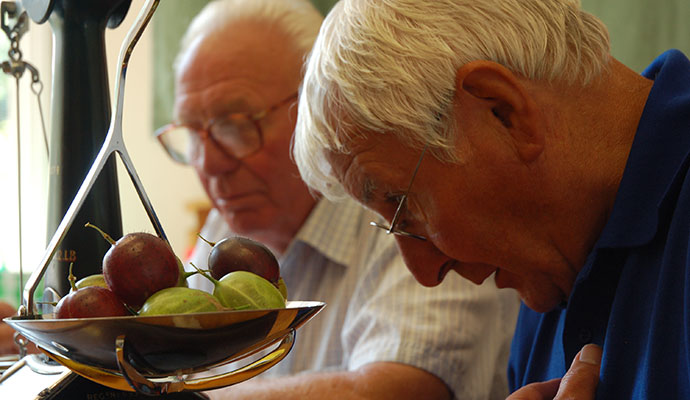 North Yorkshire’s Egton Bridge Old Gooseberry Society has been holding an annual gooseberry show on the first Tuesday in August for over 200 years, making it the oldest in the country. Come along in the afternoon for public viewing of the 600 or so entries and prizes for the winners. You will learn about reds, whites, yellows and greens and the relative merits of the Lord Derby, Lord Kitchener and Montrose varieties but you’re not likely to see the like of Bryan Nellist’s monster 35-dram (two and a bit ounces) Woodpecker in the foreseeable future.

The British Asparagus Festival, the Cotswolds 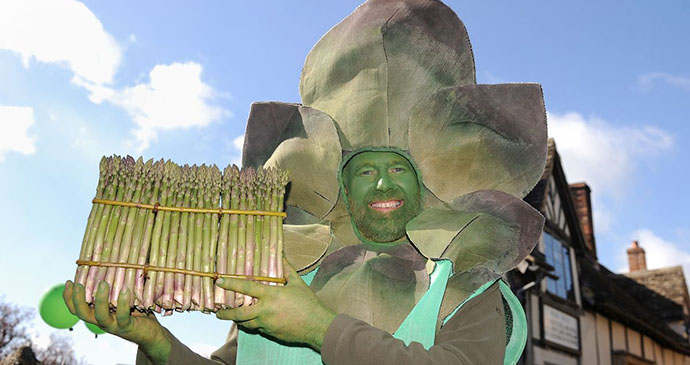 Forget supermarket sales of a vegetable that has travelled all the way from Peru; Evesham asparagus is simply the best. Asparagus is celebrated all around the Vale of Evesham and the north Cotswolds through many events. The most famous is perhaps the annual Asparagus Auction, which takes place at the Fleece Inn, Bretforton, followed by a Festival Day. You’ll also find fresh Evesham asparagus on many pub and restaurant menus during asparagus season. The festival takes place each year from St George’s Day (23 April) to Midsummer’s Day (21 June). The auction and main festival day happen over the late May bank holiday weekend. 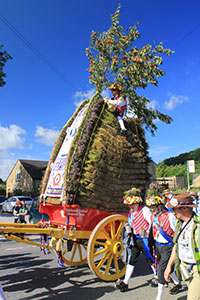 This August festival, held at Saddleworth in the Peak District, has its roots in an ancient tradition in which parishioners replaced the worn-out rushes that covered church floors with fresh reeds. It’s a bizarre sight; the cart stacked high with reeds (cut from the lower slopes of Pule Hill) and decorated with heather and a banner. One of the morris men sits atop the approximately 13-foot-high stack with a copper kettle full of ale as the rushcart is paraded through the parish of Saddleworth. How he manages not to fall off in his drunken merriment is a mystery. Morris dancers come from far and wide to take part in the spectacle. On the Sunday the cart is taken to St Chad’s Church above Uppermill, where the rushes are taken off and mixed with fragrant herbs and flowers before being spread out in the aisles.

(Photo: A morris man sits atop the cart stacked with reeds, making for a bizarre sight © Craig Hanna) 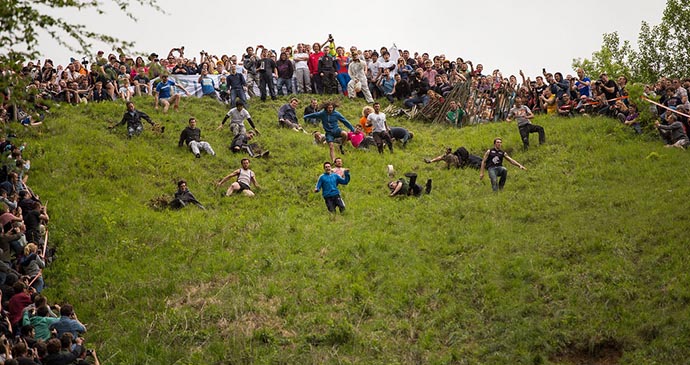 Not only is Cooper’s Hill one of the most jaw-dropping points of the Cotswold ridge, it’s also home to one of the Cotswolds’ most bizarre events – a highlight of the region’s quirky calendar. Every year hundreds of people throw themselves down this slope in pursuit of a giant wheel of Double Gloucester cheese. The annual cheese-rolling event takes place every spring bank holiday at the end of May. 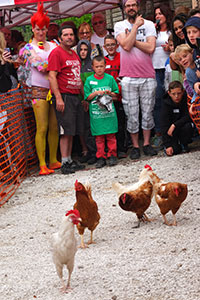 The prestigious World Championship Hen Racing Competition is held at the Barley Mow on the first Saturday in August. This may sound like an April Fools, but the race is a very serious business (well sort of). The hens are given sardonic names such as Korma, Kebab, Nugget and Drumsticks or more traditional country names like Flo Jo, Buffy, Jenny, Henry and Betty. Pruned and pampered, they’re coaxed to run the 15-metre course with the promise of the best chicken feed at the end, shaken in a bag or rattled in a tin. The fowls are given three minutes to reach the finishing line. Any squabbles between the competitive, or more likely food-greedy, hens result in disqualification. Beware that red card. The commentary is full of double entendre and hen jokes: ‘That was a fowl!’ ‘Shame, he’s beaked early.’ ‘Poultry in motion.’ Some chickens ramble aimlessly, or even turn round and head back to the starting line. Others bolt through the course in a few seconds. Hire a chicken, or just turn up on the day with your hen and register.

(Photo: Hens race around a 15-metre course at this annual championship © Richard Bradley) 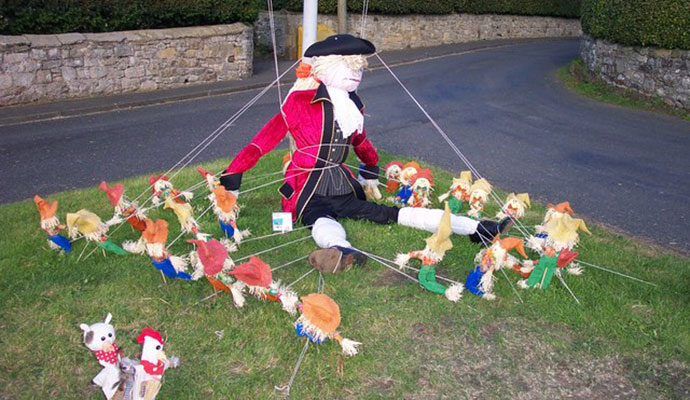 Almost every garden in Rennington has scarecrows on display during the festival © geograph.org, Wikimedia Commons

In Northumberland the village of Rennington hosts its annual scarecrow festival during August bank holiday weekend. With scarecrows on display in almost every garden, Elvis, Harry Potter, R2-D2, Little Bo Peep, Boris Johnson and Pippa Middleton have all made appearances in recent years. ‘It’s a great fun event for all, celebrating eccentric English village life at its daftest,’ say the organisers. As well as seeing the scarecrows, visitors can enjoy refreshments, cake stalls and games in and around the village hall and green. 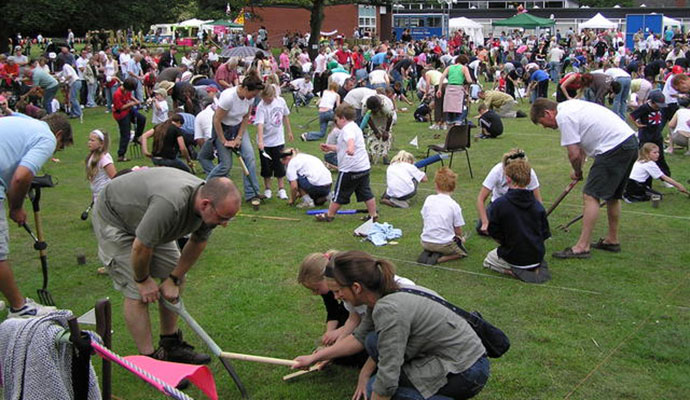 The world record for the most worms charmed is 567 © Graham Shaw, Wikimedia Commons

Worm charmers young and old do battle on the playing field at Willaston Primary Academy every June. Competitors at the Willaston World Worm Charming Championships descend on the 144 neatly marked out 3-metre-square plots for 30 minutes of cajoling the slippery customers from their soily lairs without resorting to digging. A variety of techniques are employed; most wiggle a garden fork in the turf to stimulate vibrations said to be similar to rainfall, but brute force is also popular – jumping up and down, bashing the ground – and the worms are even serenaded on musical instruments such as the tuba. When the bell rings, the cacophony ends and the count begins, with trophies awarded for categories including Most Worms, Heaviest Worm and Chief Wormer. Meanwhile, the worms must wait until after dusk, when the birds have gone to their roosts, to safely return home. What’s a good trawl? Well, the world record for the most worms charmed is 567, unearthed by 10-year-old Sophie Smith in 2009. 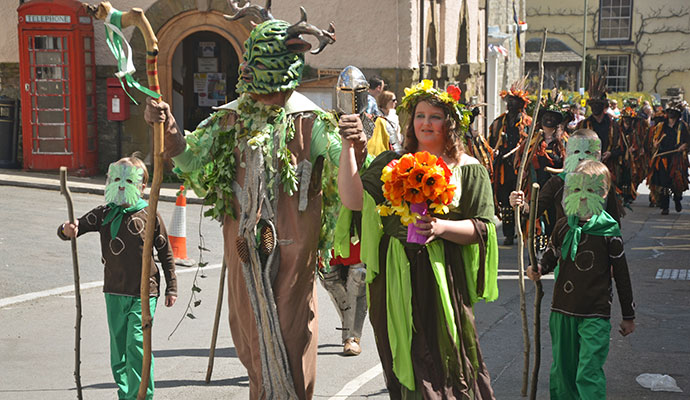 The festival sees a fight between the Green Man and the Frost Queen © Deatonphotos, Shutterstock

The May Day weekend is when the Green Man Festival comes to Clun in Shropshire. This three-day celebration reaches its climax at noon on bank holiday Monday with a fight on the packhorse bridge between the Green Man and the Frost Queen. Legend has it that if the Frost Queen triumphs, there will be no summer in the Clun Valley. If the Green Man wins, he and his May Queen will proceed to the castle grounds where a May fair awaits, with craft stalls, games, music and dancing. It’s an uplifting springtime celebration. 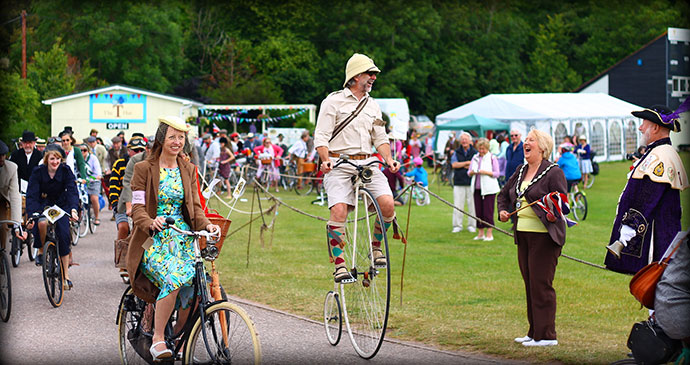 Velo Vintage run a number of unique cycle events in East Devon. The events usually involve a cream tea and their motto is, appropriately, ‘Time to cycle, take tea, converse and dress with style’. Riders are asked to dress appropriately for the 1920s to 1950s and not to turn up in Lycra. The cycling is leisurely, often only 10 miles and usually with live music along the way, plus competitions for the best-decorated bicycle and best moustache. 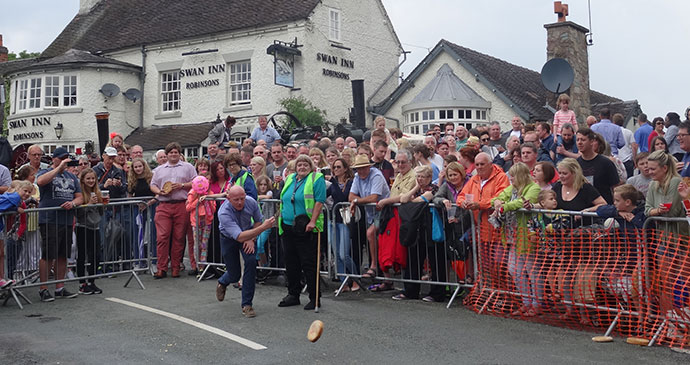 Try to time your visit  to Cheshire during Wybunbury’s annual Fig Pie Roll in June, a fun 19th-century tradition that was revived in 1995 to raise funds for the preservation of the Wybunbury Tower. The pies, which must be home-baked to a traditional recipe, are rolled down the hill between the village’s two pubs, the Swan Inn and Red Lion, with the owner of the one that rolls the furthest, and crucially remains intact, winning the title Pie-roller Champion.

Swan Upping, Along the Thames 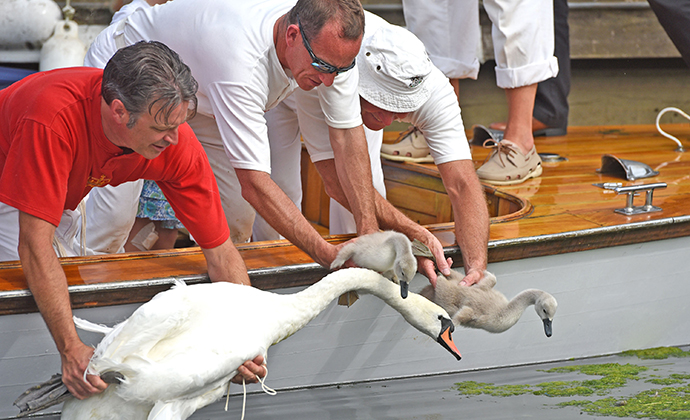 This strange ritual takes place along the Thames each year. The origins may go back as far as the 12th century, when the mute swan gained royal status, meaning that if a privately owned swan escaped, it became the property of the Crown.  The process of swan upping involves identifying swans and their cygnets, weighing them and checking their health. It now takes place during the third week of July each year.

The Royal Swan Uppers, who wear the scarlet uniform of the Queen, travel in traditional rowing skiffs together with Swan Uppers from the Vintners’ and Dyers’ livery companies, who are now the only owners of private swans on the Thames. In today’s world, the emphasis is heavily on education. The Swan Uppers make over a dozen stops over the course of four days, starting at Romney Lock, the nearest lock to Windsor Castle, and finishing at Moulsford. 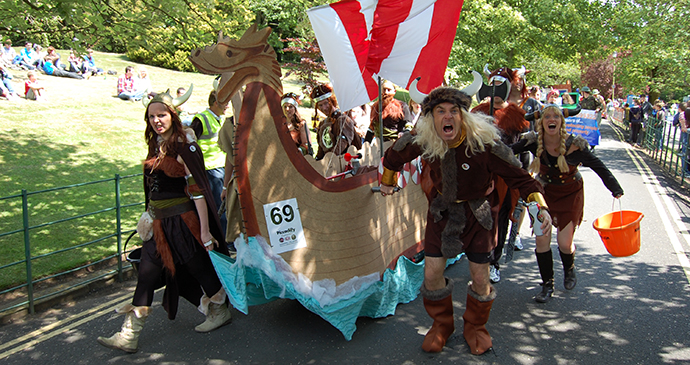 Knaresborough is famed for its annual Bed Race, a real community-spirited athletic event with the subtle difference of pushing a decorated bed through the streets! It might not make it as an Olympic sport, but at least there is somewhere to snooze after all the strenuous activity. It’s usually held every June, and most competitors take a dip in the Nidd during the closing stages of the race.

Discover more unusual events with our Slow Travel guides. Buy online to save 10%.