Over 700km from Lille and Roubaix, the tiny village of Le Saillant, in the heart of the soon-to-be-consumed region of Limousin, has a bridge that spans the River Vézère. Several years ago, as I walked off a gastronomic lunch, I watched local teenagers smoking and fishing from its parapet on their Wednesday afternoon out of school. The village was not much more than this six-arched bridge across the fast flowing waters, and a single main street leading out to the rolling countryside of the Corrèze.

“Is there anything I should see here?” I asked the lad who had nodded a polite B’jour m’sieu as I sat down by the river.

“Nothing to see. Nothing to do.” was the simple response. Then his friend joined us and mentioned the chapel. “Do you remember, a man came fromProvenceto do the windows?”

A number of possibilities began to ring in my ears.Provence? Windows? I had not even noticed a church in the village. Let alone windows. The boys pointed out a small building in a row of cottages, but it was locked and closed, with no hint of glass amongst the plain brickwork. “My aunt has a key”, offered one of the kids who scampered off to find it.

As we unlocked the door, afternoon sunlight streamed through a small fanlight. Unmistakeable hues of red, grey-green and blue flashed in my eyes. The improbable was true. A tiny little room, not much wider than the wingspan of an eagle, hid six modest, simple, honest and  inspirational vitraux by Marc Chagall. Two small panes in the artist’s trademark colours; four sketches in black and gold, seasons of the agricultural year, the working life of Le Saillant.

This was my first true experience of serendipity. Way off the tourist track, unmentioned by any guidebook of the time, in stillness of the modest chapelle of this Limousin hamlet, I felt a communion with one of the century’s greatest interpreters of the spirit, even more powerful than that which draws thousands of visitors to the great cathedral in Rheims and the grandest museums in the land.

This month, Chagall dealt me another memorable hand. A brace of exhibitions dedicated to the artist had not yet opened during my last visit to Lille, during the first week of Renaissance, the latest Lille3000 fest. So I made an autumn return to the city, especially to visit the exhibition Marc Chagall: Les Sources de la Musique at Roubaix’s La Piscine. 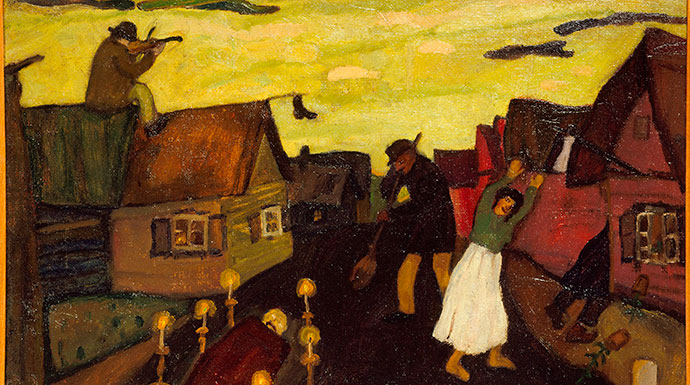 Over a truant catch-up with friends, which included coffee and mini merveilleux creamy meringue cakes on Lille’s Grand’ Place, just around the corner from her office (hey, would you rather gossip beside the photocopier or people-watch on one of France’s historic squares?), a long-standing colleague remembered that there was to be a concert at La Piscine that evening. The event had been fully booked for weeks, but she had a ticket, could not go and asked, to my delight, if I would I like to use it instead.

So it was, I wiped coffee and cream from my lips, headed to the métro, and spent the afternoon wallowing over more than 200 works celebrating the musical influences of the Russian-born French artist.

I had expected the celebration of the famous Sources de la Musique from New York’s Lincoln Center; after all, a twin exhibition at Paris’s Musée de la Musique, fetes the sister tableau. But what is offered is much more: a veritable deluge of the artist’s works, from his earliest family sketches to inspiring stained glass of the holy land, an exhaustive celebration of the artist, his musical muses, influences and expressions.

Youthful paintings of his brother and sister playing the mandolin, and later images of his wife and biblical figures at their music, share the walls with mellifluent essences of the artist’s life. Russian, Ashkenazi shtetl heritage: songs and blessings at the family Passover and Sabbath tables to the blowing of the shofar, and great lifecycle themes of his most famous works: klezmer musicians in the clouds of a wedding, the iconic fiddler on the roof.

Modest sketches from forgotten publications and illuminated models for Israel’s Hadassah hospital windows. Ceramics from La Piscine’s own permanent collection. Many paintings arrived from the National Chagall Museum in Nice (currently closed for renovation), but so did many national treasures from the Pompidou Centre and the Beauborg – there must be bare walls there this winter. Dozens more were loaned from private collections from around the world, seen in public for perhaps the last time.

I left this life-affirming exhibition hugged and swaddled by the entwined embrace of music and the soul, and headed off for a coffee, since in my pocket was the ticket for the evening’s concert. 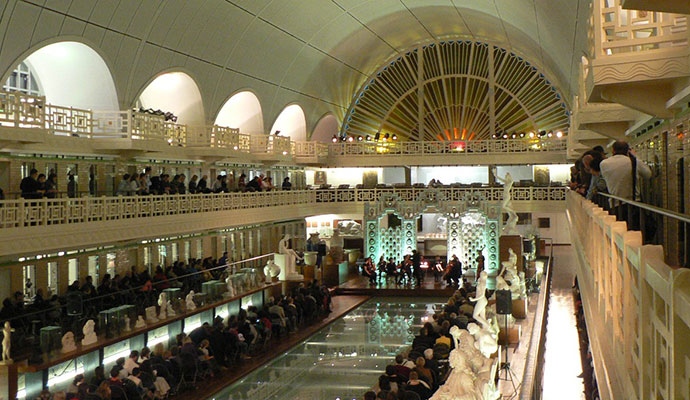 Quite a queue conformed at 19.30 when the museum doors reopened for tThe recital Chagall et Ses Musiciens by the Paris Mozart Orchestra celebrated the works of the Russian artist © Laurence Phillips. No tourist gig, but an evening for the locals. Families from Roubaix and Lille, as many from the poorer suburbs as from smarter quarters. Schoolchildren, young musicians from a local conservatoire, students from Villeneuve d’Ascq and Lille’s Catho. Neat rows of chairs alongside grand sculptures lined the swimming pool itself, where the privileged had reserved seats. The rest of us made our way to the Art Deco galleries and former bathhouse changing booths, where we became promenaders for the evening. Opera house conductor Claire Gibault introduced works by Stravinsky, Chagall’s near contemporary, then Ravel’s Kaddish for cello and finally Tchaikovsky’s celebration of Russian folklore. The lyrical spirit continued to soar well into the night, all the way home.

So fitting, for an artist whose life and works were so closely involved with music, whose skills adorn opera houses, on stage and off. If you fancy attending, the exhibition itself is on until 31 January, and there are new concert performances on 2 December and 21 January. The final weekend of the exhibition promises to be a very special occasion with live Yiddish, gypsy and kletmer music on Saturday 30 January.