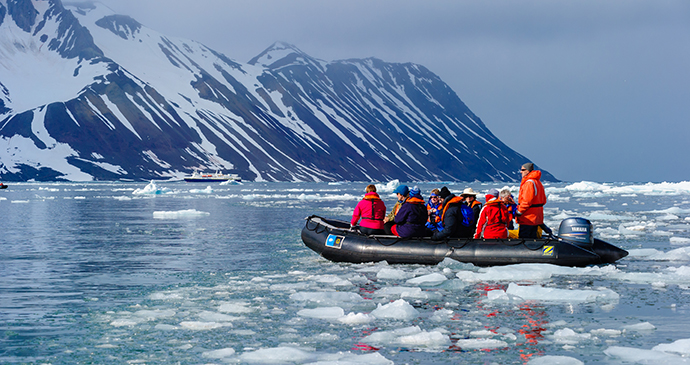 This old whaling area is one of the most spectacular glacier-filled corners of the west coast.

This fjord is one of the most spectacular scenic corners of the west coast. Numerous glaciers terminate into the fjord’s several side arms, while the eastern end of the fjord, Brepollen, is almost completely surrounded by imposing glacier fronts. Between the glaciers, a number of mountains add to the spectacular scenery – first of all the mighty and wild Hornsundtind, which rises directly from the shore to its peak of 1,431m, much higher than any other mountain within 100km. Other remarkable elements of the scenery are the gigantic rock wall of Sophiakammen and the pointed needle of Bautaen.

It is only a few kilometres from here to Hamburgbukta on the east coast and it is a favourite journey of polar bears, the so-called ‘Polar Bear Merry-go-round’; they are also frequent visitors to Hornsund in the summer months. There are many seabird colonies here, as well as remains from the heyday of whaling, walrus hunting and trapping and the important Swedish–Russian meridian expedition around the turn of the 20th century.

The name ‘Hornsund’, together with the low elevation of the glaciers that separate it from Hamburgbukta on the eastern side of the island, has given rise to speculation that it may be derived directly from the English name ‘Horn Sound’.

This indicates that it’s a through-passage rather than just a bay, ie: that the area south of the fjord is connected to the north only by glacier ice, which closed the sound only after the discoverers visited in around 1600, as the ice cover of Svalbard has grown considerably with the climate getting colder over the centuries towards the peak of the ‘little ice age’ in the early 19th century.

Radar measurements of the ice thickness could not solve the riddle satisfactorily as their margin for error was such that the land under the ice could be either just under or above sea level.

Despite its dramatic scenery and the chance of spotting polar bears, Hornsund has been little visited by bigger cruise ships because its entrance is often blocked by ice drifting around southern Spitsbergen, carried by the easterly currents. Only cruise ships with more flexible programmes (and who spot that the area is free of ice when passing by) and a number of longer expedition cruises (especially those circumnavigating Svalbard) include this fjord.