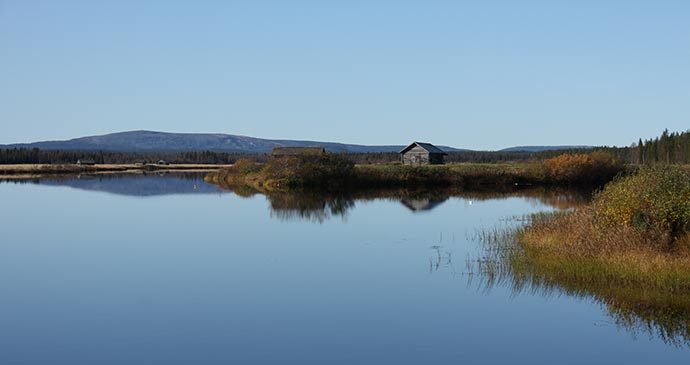 It’s not known why the Germans soldiers never reached Suvanto but the result is breathtaking: houses, barns, storerooms of gnarled timber titillate the senses at every turn.

Due east of Luosto and reached via Pyhä on Routes 962 and 9621, the ravishing village of Suvanto is immediately different. It is the only settlement in the whole of Finnish Lapland where all the buildings survived the destruction of the Germans as they retreated. It’s not known why the Germans soldiers never reached Suvanto to set fire to the village as they did elsewhere in the province – but the result is breathtaking: houses, barns, storerooms of gnarled, timber titillate the senses at every turn. In short, you should make every effort to get here to fully appreciate what Finnish Lapland used to look like and to comprehend the full horror that unfolded as entire villages and towns were systematically torched in the closing stages of World War II. Before you cross the bridge into the village itself, pause and turn left into the visitor car park and you’ll see the old cable-guided ferry which once shuttled back and forth across the Kitinen River and provided the only access to the village – Suvanto’s relative isolation is one theory, at least, as to why the Germans never got here. Today, all the buildings in Suvanto are protected by Finland’s Board of Antiquities and Historical Monuments.