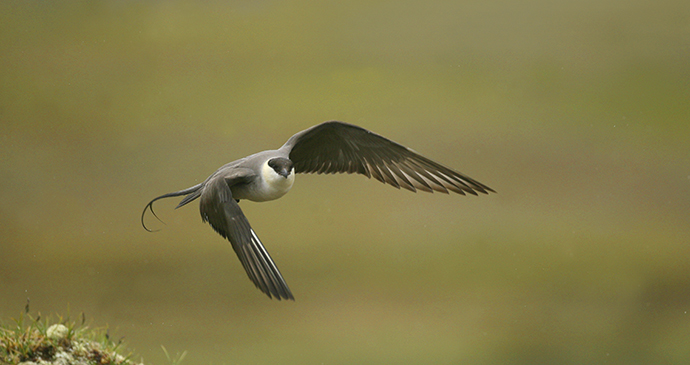 Long-tailed skuas arrive at the breeding grounds in May, settling in loose-knit colonies on high tundra and scree © BMJ, Shutterstock

The name ‘skua’ comes from the Faroese Old Norse skúgver, presumably a rendering of their chase-call in flight. Known to North Americans as jaegers, skuas are large, gull-like seabirds with dark plumage and markedly angled wings. They have conspicuous white patches at the base of the primaries. Superficially like immature gulls, they are heavier, more robust and menacing in mien, as befits a bird of prey. Theirs is a piratical nature and they have hawk-like beaks to serve it. They are kleptoparasites – carnivorous buccaneers – chasing other birds, mostly gulls and terns, in the air and forcing them to disgorge their catch. True seabirds, they come ashore only to breed.