The most northerly of all deer, the reindeer’s range is circumpolar on the tundra. Sub-species of the reindeer range from Arctic Canada – the Peary caribou – by way of introduced animals in southern Greenland to Svalbard, where the smaller version R. tarandus platyrhynchus is closely related to the Siberian and Canadian reindeer and is presumed to have arrived via the winter ice from Severnaya Zemlya and Franz Josef Land. They are not related to the domesticated reindeer of Scandinavia. 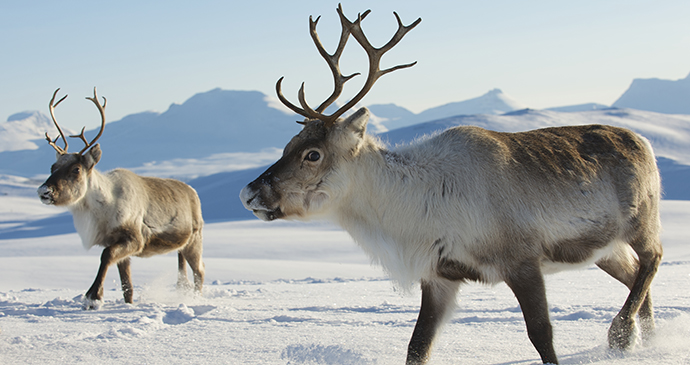 Reindeer have broad and deeply cleft hooves that splay out for support on snow © Dmitry Chulov, Shutterstock

Reindeer are all small animals, but the buck of this Arctic sub-species reaches only to about a metre at the shoulder. They range widely over the tundra and islands, are slow-moving and are relatively easy to approach. The population in Svalbard was in danger of extinction from hunting until it was given legal protection by the Norwegians in 1925; it is now  moderately abundant. They are the only deer in which both sexes wear antlers, those of the males being particularly impressive on such a small body; those of the females are less generous, being little more than forked spikes. Adaptation for the Arctic includes a thick coat and a hairy muzzle. The ears and tail are short, reducing loss of body heat. They have broad and deeply cleft hooves which splay out for support on snow.

In winter reindeer forage for lichens; in summer they graze the abundant vegetation of sedges and grasses, perhaps taking a few birds and bird eggs, even lemmings if they are available. During the summer months they patronise the coast to feed almost continuously in order to build up a layer of fat which will see them through the hard times of winter.

The rut takes place in September or October, when a dominant male holds a herd against intruders until towards the end when he is exhausted and lesser males have their wicked way. Males shed their antlers after the rut and grow replacements in the following spring. Females keep them through the winter, shedding after giving birth to the single calf in May or June. Lactation lasts three months, during which time mortality of the calves is high on account of predation by bears and foxes. In Greenland, sea eagles probably concentrate more on afterbirths and the opportunities arising from sick or injured calves than healthy young.

The Arctic reindeer tend to be more gregarious than those of lower latitudes, and they make impressive long-distance seasonal migrations.