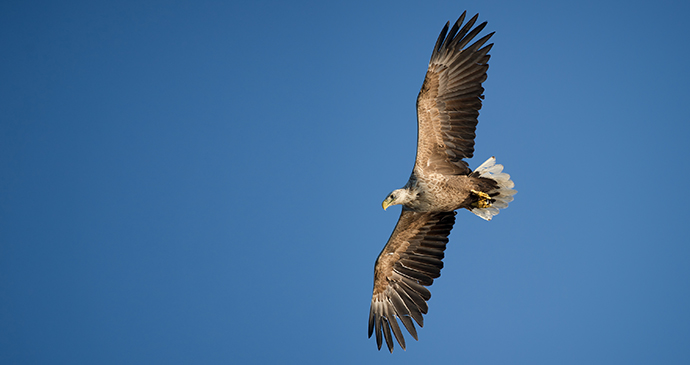 The white-tailed sea-eagle is a large, vulture-like eagle with a huge bill and long neck © Andrew Astbury, Shutterstock

Raptors – birds of prey – are diurnal carnivores, hunting live prey, though they are not above taking carrion. Typically they have strong feet with which they grab and kill, while powerful hooked bills are used for tearing prey. The males are usually smaller than females. They are superb fliers.The white-tailed sea-eagle, for instance, appears massive in flight, with broad, rectangular, deeply fingered wings and a white wedge-shaped tail. It is fairly widespread along the coasts of the Russian Arctic, Scandinavia (but not Svalbard), Iceland and southwest Greenland (as well as the Middle East and Eurasia).

The gyrfalcon, meanwhile, the largest and most northerly of falcons, is a truly Arctic species. A coastal and inshore bird, it holds vast territories. Smaller than the gyrfalcon, the peregrine does not penetrate so far north and has totally different hunting habits. A stocky falcon with a short tail and a prominent ‘moustache’, it is compact and powerful. In flight its wings are broadly based but sharply tapered towards the tips. The female is significantly larger than the male. It is widely distributed from the tropics to the Arctic, where it is circumpolar, with strongholds in Novaya Zemlya, Franz Josef Land and the Siberian Arctic.