Circumpolar and a decidedly marine mammal, the polar bear’s whole life is associated with the pack ice. Normally living within 200 miles of the shore, polar bears travel as far north as the pole. From east Greenland to Novaya Zemlya there may be 5,000 individuals, 2,000 of them in Svalbard waters. Satellite tracking has shown that polar bears range widely between southern Svalbard and Novaya Zemlya.

The polar bear is a huge animal, especially threatening when it stands up on its hind legs. Males may stand 2.6m tall and weigh over 400kg, females rather less. A curiously small triangular head sits on top of a long neck and a massive body encased in a thick layer of blubber. It has a roman nose, small eyes and short, round, furry ears. Its long legs are covered with dense fur and its large feet are covered with fine hair even to the toes; the soles are densely hairy. It has yellowish-white fur throughout the year in aid of cryptic colouration – camouflage. The long guard hairs form a watertight outer coat over a soft and fluffy undercoat which traps a layer of air against the skin; this allows it to swim well without getting wet to the skin. Once out of the water a quick shake leaves the outer coat almost dry. The guard hairs are air-filled and exceptionally strong. If you are lucky enough to find a tuft of white hairs on the shore, try pulling one apart. If it breaks it belongs to a reindeer! 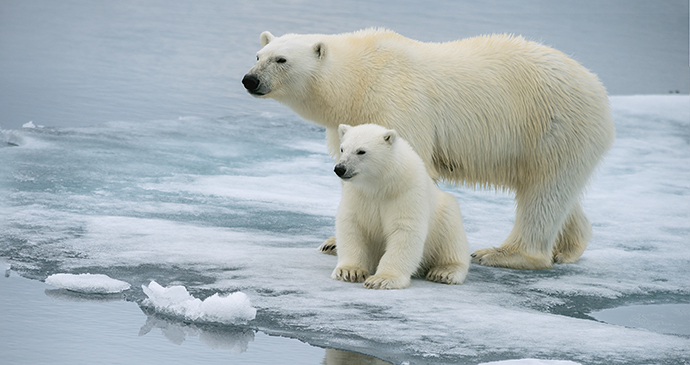 The mother polar bear will take care of her cubs for two years before leaving them to fend for themselves © FloridaStock, Shutterstock

‘…as the master walked along the ship, he heard a beast snuffe with his nose, and looking overboard he saw a great beare hard by the ship, wherewith he cryed out, a beare, a beare; and with that all our men came up from under hatches, and saw a great beare hard by our boat, seeking to get into it, but we giving a great shout, shee was afrayd and swam away, but presently came backe againe, and went behind a great peece of ice, whereunto we had made our shippe fast, and climbing upon it, and boldly came towards our shippe to climb up the bow, but we had placed the sail on deck as a screen and lay with foure peeces at the capstan and shotte her into the body, and with that, shee ranne away; but it snowed so fast that we could not see whither shee went, but we guest that she lay behind a high hummock of ice.’

The polar bear is buoyant in the water, with its head held high. It is a strong swimmer, with seemingly endless stamina. One individual was GPS-tracked swimming continuously for 232 hours, covering a distance of 687km in water varying from 2 to 6˚C. The bear’s main prey is seal, including bearded and harp, but especially ringed seals. It has a keen sense of smell and can detect seal pups even beneath the snow.

Polar bears are solitary by nature, living perhaps the loneliest life on the planet, but there may be a gathering of numbers to take advantage of an abundance of food. Of course there is also interaction at the time of breeding – the only time both sexes meet. They court in the spring, but after copulation in early summer the male takes no further part in the process. Implantation is delayed, and the female takes to a den excavated in the snow in late October. One, sometimes two, helplessly weak cubs are born in the den in late December. At this time they are blind and almost naked, but their diet of rich milk – 30% butterfat – means that by the time the mother breaks free in April, the cubs have increased from a birth weight of 680g (1½lb) to a healthy 11kg (25lb). At this time, conveniently, ringed seals have just given birth and are at their most abundant and their most vulnerable.

The mother will take care of the cub or cubs, teaching them their predatory trade for a good two years before she abandons them to make their own way over the ice and the polar seas. Starvation is the commonest cause of mortality in the first couple of years after they are abandoned. The females breed only once every two years.

Summer is the lean time for polar bears. Deprived of the fast ice with its breeding population of seals, they come ashore to snooze the time away on tundra meadows, eating eider ducks and chicks, grazing the sparse vegetation and searching for ripe berries. At this time they are hungry and dangerous. They need to be taken seriously.

Polar bears have been much persecuted in the past, especially by the Norwegians with the devilish ‘self-kill’ device of a gun set within a cage, offering a choice morsel to the inquisitive bear. In taking the meat, it releases the trigger. From the 1950s, they faced safari hunters. Since 1973, they have enjoyed circumpolar protection, at least on paper, allowing only native hunters a quota. Now they face global warming.